Why Playdead’s ‘INSIDE’ is totally worth your time

Released just under a week ago, INSIDE is a side-scrolling, puzzle/platformer that has been occupying my mind ever since I had the privilege of playing through it. Made by the developers that created Limbo, the game stays true to the formula that Playdead laid out for their previous title. It is an atmospheric, mysterious and haunting experience that leaves you stranded in a desperate struggle to survive a world that is out to hurt you. While the game may lean heavily on the ground-work created by the previous game, it manages to expand on and learn from Limbo whilst creating an experience that manages to be special in its own right. All of these reasons and more make INSIDE a game that is totally worth your time.

Simplicity –
The game is absolutely elegant in its simplicity. It has no HUD, no cutscenes, and no dialogue, yet its able to convey so much crucial information to player. The game uses music incredibly sparingly with large swaths of silence (outside of your characters trudging footsteps) being a commonality. This effect leaves the game with a huge amount of ambience and allows moments of intensity or mystery to be amplified by the breaking of silence. Even the game’s visuals benefit from its simplicity with silhouetted structures looming in the game’s background, inducing intimidation and helplessness upon your character.

“INSIDE has no HUD, no cutscenes, and no dialogue, yet it’s able to convey so much information to player.” 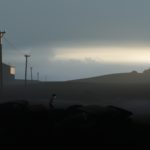 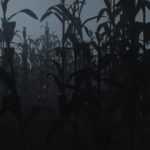 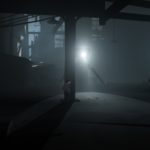 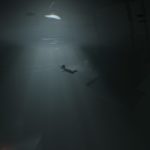 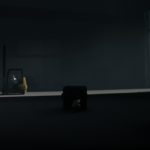 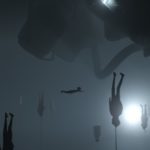 The game may operate on a two dimensional plane but it most certainly does not neglect to use that third dimension to its absolute credit. In fact, INSIDE may be the best example of 3D space being utilised in a 2D title ever – and that’s a big call.

The games background and foreground (whilst not traversable) serves as a narrative builder, creates motivation for your characters actions, interacts directly with the games success/failure states and helps to build the beautifully horrific world around you.

The game also features a mechanic that allows you to interact with objects just off of your plane of movement. This means that you can walk past an object unhindered but can still push it, drag it or jump on it if you so desire. This system worked just so perfectly that it made me question why it hasn’t become the stock standard for games of this type.

The gameplay of INSIDE is also executed in a really satisfying and elegant way. The puzzles and platforming are integrated smoothly and together they form obstacles for the player to overcome. These obstacles manage to walk the fine line of challenging enough to be rewarding when accomplished but also not so challenging that they slowed down the pace of the game (or made me turn to Google).

Some of the best, most memorable moments of the game was when these two gameplay pillars coincided with moments of narrative progression or threat. Barely escaping a desperate situation by using only your wit and the limited resources around you feels fantastically rewarding.

The game also has moments where the puzzles feel so inventive and clever yet so simple that you can’t help but lean back in quiet appreciation of their design.

The game also doesn’t overstay its welcome. It took me 3 hours to complete (according to steam). Some may view this as too short of an experience but honestly I wouldn’t have wanted it to go for any longer. It paces itself beautifully and never slows down or artificially prolongs your experience with it. It exists for exactly as long as it needs to and doesn’t look to waste the players time.

However, those of you looking for a longer experience can find one in the form of secrets. I myself only found a small handful of the existing secrets within the game so scouring the world and exploring it in its entirety will allow dedicated players to spend more time within the beautiful world that has been created. Those of you who manage to find them all will also be rewarded with alternative narrative development for all of your hard work.

Narrative –
As mentioned previously, INSIDE doesn’t feature any cutscenes or dialogue. The entirety of the game’s narrative is told through its gameplay, which has proven to be a difficult feat for games to achieve in the past.

As you explore, the mystery of the world you inhabit becomes more and more daunting and perplexing. Without trying to spoil anything big, it begins to become clear that your character may be alone in his pursuit of survival amongst an institute of individuals out to cause you harm.

There is clearly a lot more going on than just that although the game never outlines any of it specifically. It wants you to uncover everything for yourself and create your own narrative with the information that it provides.

In this sense, INSIDE is a lot like Limbo; the narrative to the game is totally open ended and up for interpretation. I have to admit, this isn’t my favourite story telling technique but I have to respect the way the game leaves you with the same sense of mystery it worked so hard to create. The world it develops is also full of enough depth that it allows you to create varying narrative strands out of the same information. I had a lot of fun looking up theories online where people attempted to uncover the full truth to the game’s world.

With all that said and done, INSIDE has easily become one of my favourite gaming experiences this year. Some aspects of the game were so beautifully crafted that I can see them being referenced as industry standards for years to come. The game is elegant, haunting and without a doubt, totally worth your time.