Jakob:  I’d like to begin this piece with an admission. I have been worried about what Final Fantasy XV is going to be like ever since it was first announced. From the original title associating it with XIII to mixed messages around storyline and content I will freely admit I was concerned. After spending three hours playing the game yesterday I can safely say that all of those doubts have been alleviated. Those three glorious hours have rekindled both my passion and interest in the future of the Final Fantasy franchise.

Luke: Yeah, and I have to say I am a Final Fantasy fan from “back in the day”. I struggled with the linearity of the last couple of games in the franchise and I really want this to reinvigorate the series. The game starts off feeling quite small in scale compared to the over-the-top style that I’m used to from these games, but I like that. I like that it’s four dudes riding around in a car, taking calls on their smartphones and doing the odd hunting quest. I mean sure, something much bigger is definitely around the corner, but there is a simplicity to its setup that I found instantly engaging and difficult to put down.

Jakob: And what a car! The Regalia has been seamlessly incorporated into the game as a mode of transport, which has always been a core component of the series.

Alongside the other elements that you mentioned Luke, this game feels more familiar and real than any of the others. I found myself getting into the conversations between the four protagonists as if  I were there with them on their adventure.

Luke: I think that’s especially important. I mean, we’re going to be spending likely over a hundred hours with these people, so if they’re not at least a little bit interesting or engaging it’s going to be a hard slog. I was slightly concerned about the ‘bro’ factor but they seem fine after spending a few hours with them.

I have to say, sitting next to you while we played our own individual games, it was funny to see how I’d powered ahead with the main quest line while you definitely lingered back to do other things instead. Final Fantasy XV shows a good amount of options in quests and ‘things to do’ right off the bat.

Jakob: I’ve always adored that flexibility within the Final Fantasy franchise, and guilty as charged, I had to find out how they work. The quest section of the main menu is where you are going to spend a fair bit of time when choosing what you want to do. Thankfully it is straightforward and concise.

You are able to highlight the markers for the quest you want to pursue from this menu, and there is even a handy level indicator that shows whether you may be getting in over your head. From the storyline quests to the hunt marks and even just helping out your fellow man, the quest system is a polished tool that is going to help you experience this game.

Luke: Yeah I liked how clear it all was to make choices of what to do next. Bonus points for the ability to be passenger in the car and have one of your mates drive you straight to your destination of choice (at least, during the day, as night-time can be more dangerous with beasts loitering on the roads).  Even though I pushed forward in an effort to see as much of the story as possible in my play session, I can definitely see this being one of those games where I’m going to want to be a completionist; and if this preview build was any indication, I can tell you now that there is going to be a lot to complete.

It’s the little things, too, that made me smile. Taking the time to stop and help a hungry cat by catching it a fish, for example. And within the storyline, I appreciated the nods to other genres like horror, as I was exploring a dark dungeon with the constant threat of ‘something’ lurking in the shadows, which inevitably led to a memorable mini-boss that had me on my toes. How addictive is that combat, though? 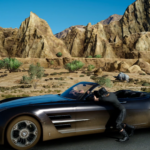 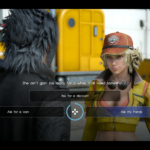 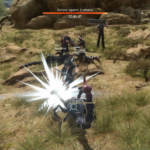 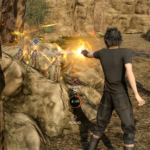 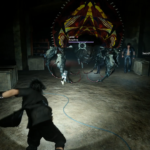 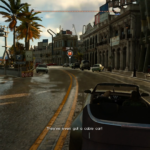 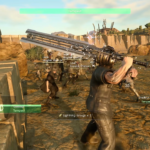 Jakob: The combat system is awesome.

I really liked that you are able to approach the real time battles in various ways, ie; stealth or guns blazing (quite literally for one of the four guys). I’m not sure if that grading part at the end is solely used for self reflection or if it serves a higher purpose, but the constant feedback it generates helps to refine your style for sure. Being able to swap between different weapons during battle spices things up and allows you to adapt to the situation you are in. I will need to spend a bit of time mastering the parry system, but this also slots into the general flow of things really well.

The magic system is something that has me utterly psyched. You are able to craft your own time honored favorites such as Fire or Blizzard to a potency of your own creation. Add to that the fact that you drain the elemental energy for those spells from your surrounding and XV has taken a new step when it comes to immersion. Oh, and I’ll forever hold in my heart the fact that I was able to catch a fish first go to feed said cat while you watched me give it a crack.

“The magic system is something that has me utterly psyched. You are able to craft your own time honored favorites such as Fire or Blizzard to a potency of your own creation.”

Luke: The best part about the combat is that it feels like it has a lot more depth than what we saw in the last couple of Final Fantasy iterations. While it is ultimately a very fleshed out version of hack ‘n’ slash, different abilities come into play frequently enough to keep it very interesting. Noctis, for example, is able to warp from location to location on the battlefield. Whether that be warping quickly to an enemy to take them down faster or warp to a higher vantage point which then allows you to drop down with a devastating blow from above, this mechanic makes things a lot more tactical.

Also, assists from your party come into play, which triggers a sort of quick special attack that then triggers you to follow up with an attack of your own, which came in handy particularly against the bosses I fought against (partly because it gave me a slight breather and a chance to re-position myself when in a tight spot). Sometimes with RPG’s the combat can feel stale or repetitive, but that definitely was not the case here at all.

Jakob: One last thing I’d like to mention before is around the hobbies of the four main protagonists and how it ties into the gameplay. The hobbies are as follows; fishing, survival, cooking and photography. They each gain experience depending on the actions that you take and by their very natures make you engage with your surroundings.

You can choose to rest at an inn or discover havens where you can camp out. Fishing spots litter the landscape alongside mining and harvesting points (an ode to FFXIV in my opinion) and photo opportunities present themselves as you play. Coming back to the point of immersion into this vast new world, it seems you are presented with the chance to do so with every mechanic, and this one was definitely one of my favorites.

Luke:  When I went into this play session, I was 50/50 on whether or not Final Fantasy XV was on my ‘must-buy’ list of 2016. After spending some considerable time experimenting with its different systems, tackling some side quests and completing the first couple of chapters of the main storyline, you can now call me a convert. This is probably the most excited for a Final Fantasy game in ten whole years; it genuinely feels like the developers have taken on board the feedback that prevented Final Fantasy XIII and Lightning Returns from being successes, and are determined to release a polished and stellar product this time around. It’s pretty exciting.

Jakob: I second pretty much all of that sentiment. I had already completely payed off my pre-order but still had some horribly niggling doubts that this title would not be able to redeem Final Fantasy after the XIII debacle. There is depth in this game. There is a great balance of light and dark elements in the storyline. The characters are relatable and I can’t wait to get to know them beyond a three hour play through. When November 30 comes around, if you don’t hear from me, you know exactly where I will be!

A big thanks to Bandai Namco for letting us spend time with them here in Melbourne, previewing Final Fantasy XV.