While the AAA releases  at PAX AUS were a bit lacking this year compared to previous years, the Indie developers in the PAX Rising area definitely picked up the slack for us, with a massive array of emerging and successful talent on show. I was very lucky to be able to interview one of those talents last weekend.  Screwtape Studios are the brain-child behind one of the games that highlighted my entire PAX experience: Damsel.

Damsel breaks the notion of the term “damsel in distress”. In fact, it doesn’t just break it; it completely obliterates it. Here we have a game that shows us that not only does the the term “Damsel”  no longer instill a feeling of being helpless, but instead has used it as a mantle of empowerment for our kick-ass female protagonist.

When I had the opportunity to play the game on the PAX Rising floor, I was both excited and impressed by the overall look and feel of the game before I even touched the controller.  As soon as I picked it up and tested it out, I felt like all my childhood memories of being told that I wouldn’t amount to anything in life because I was a girl, completely melted away. One thing I love to see in games is diversity and representation that gives us that “you can do anything” feeling.

The game is an arcade-style platformer. You take on the role of agent Damsel, whose mission it is to eradicate the vampire threat and keep humanity safe from the evil that seeks to destroy it.

Along your race across the world you will also be gathering Intel and rescuing hostages (which by the way, do the most adorable dances when rescued). You get to do all this with the aid of a lovely ever-expanding arsenal of weaponry at your disposal.

The gameplay is so reminiscent of old arcade games, while at the same time displaying a modern finesse for the platformer genre and giving us a fresh take on pop culture history.

I found the gameplay itself to be really smooth and adaptable. It’s easy to get the hang of and the level changes give you new challenges to keep you engaged in slaying those not-so-sparkly vampires. Though I have to confess, even as it pains me to do so… I was completely rubbish at playing the game properly on the day (which I shamelessly blame on sickness!) and spent a good amount of time dancing with my rescued hostages instead. This may have lead to my inevitable and continuous demise, but hey! If you can’t have a bit of silly fun, you miss the entire point of gaming. At least, that is my own personal opinion as a serial protagonist dancer.

The gameplay wasn’t the only element grabbing the PAX-goers (and my) attention. The art of this game is so detailed and engaging, seeming to take many of its inspirations from pop culture we love so much (Buffy the Vampire Slayer is one that comes to mind). It’s also very reminiscent of the comic book cartoon style that is so popular in comics done in recent years.  When you draw so many nostalgic areas of our geeky history into not just the art, but the music as well, it creates a feeling of community with the developers themselves. I felt so at home there with the Damsel crew at PAX, they were all just as excited about the game as the convention goers were, and having that much passion shines through so vibrantly in their work on Damsel.

“They were all just as excited about the game as the convention goers were, and having that much passion shines through so vibrantly in their work on Damsel.” 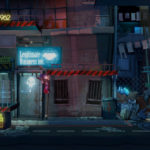 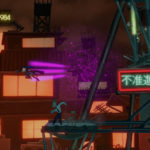 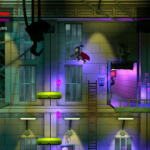 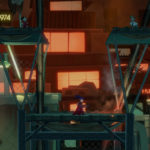 Overall I was so thoroughly impressed by Screwtape Studios work on Damsel. It should also be mentioned that Damsel happens to be their debut game for console and PC! How awesome is that? It’s so wonderful to see more and more Australian dev studios producing such high quality, fun games. I feel that the world tends to forget how much untapped talent we have here.  I highly recommend you keep a close eye on Screwtape Studios and their work on Damsel, which you can do over at their website here.

Damsel will be released sometime in the early months of 2017, so in the meantime practice your platforming skills and get ready to slay, queen, slay!