PAX AUS 2016 might be over but that doesn’t mean the indie fun has to stop. I had the pleasure of playing Goblins of Elderstone by Lost Goblin, which was featured this past weekend at PAX AUS on the PAX Rising floor. One of the most fun builders I’ve had the pleasure of playing in a long time, Goblins of Elderstone is a fantastic Kickstarter which has put a unique twist on the average building genre; also being a goblin tribe simulator which I personally found adorable and refreshing.

To begin you choose your path from a selection of gods; will your goblin king or queen be a warlord conquering the world, an industrious trader that rules the world through wealth, a powerful avatar to the gods or the neutral combination of all of them. You will get to make several choices at the beginning of each new game which will help set the tone of the gameplay. These choices will also influence your play-through, making each one unique.

Once this has been done it is now time to name your clan and village then select some prime real estate! Remember that location is everything and thanks to stretch goals so are seasons. I went with clan KittyBoomBoom for my first time out of the goblin gate and chose what I thought to be a bunch of dedicated goblin workers, we then moved into the swamp.

I started building right away, leaving no goblin un-tasked, and believed I was on top of things. Unfortunately there’s no way to describe the middle part of my game other than bad goblin, lazy goblin, sad face, oh no dead goblins without giving away some integral story line. While it’s great fun to succeed, I feel it would be better fun for you to discover for yourselves just how much fun even failing can be in Goblins of Elderstone.

In Goblins of Elderstone you find yourself in control of a goblin village (well as much as one can possibly ever be in control of a goblin village, which is basically by happy thoughts and pixie dust, I believe). You are tasked with giving your goblins instructions to keep them busy, help them survive and appease the gods…  But mostly keep them busy less they get bored and havoc ensues. Of course I quickly learnt you cant really order your goblins to do anything, simply assign them tasks.

If you don’t attend to your goblins needs or allow them to get too bored there’s no telling what mischief or destruction they can bring down upon your village.  From napping to stealing, they will even go as far to kill each other and burn down the village!

Goblin gone missing? Beware! MIA goblins can come back to haunt you either literally or figuratively. 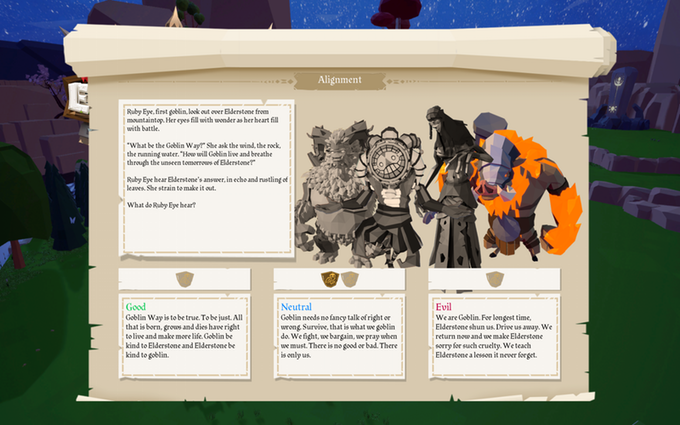 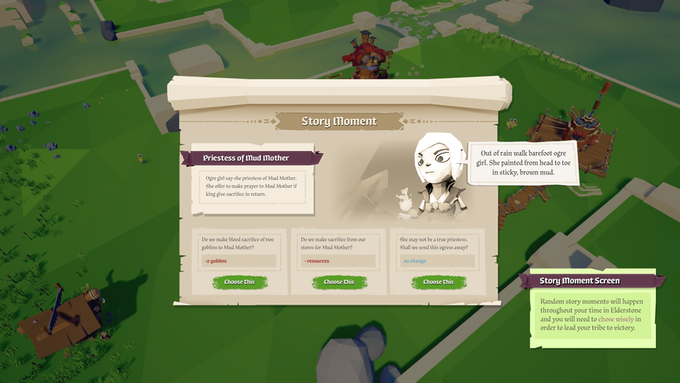 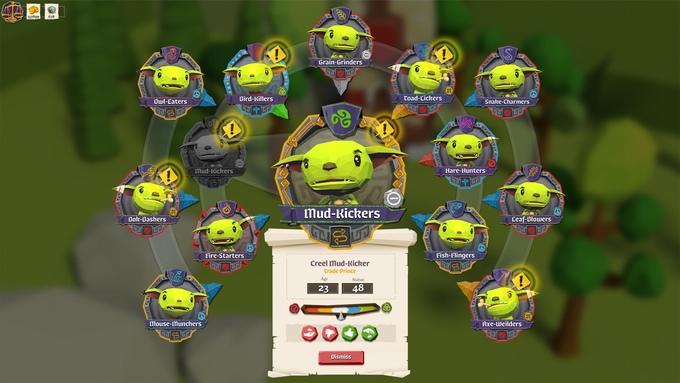 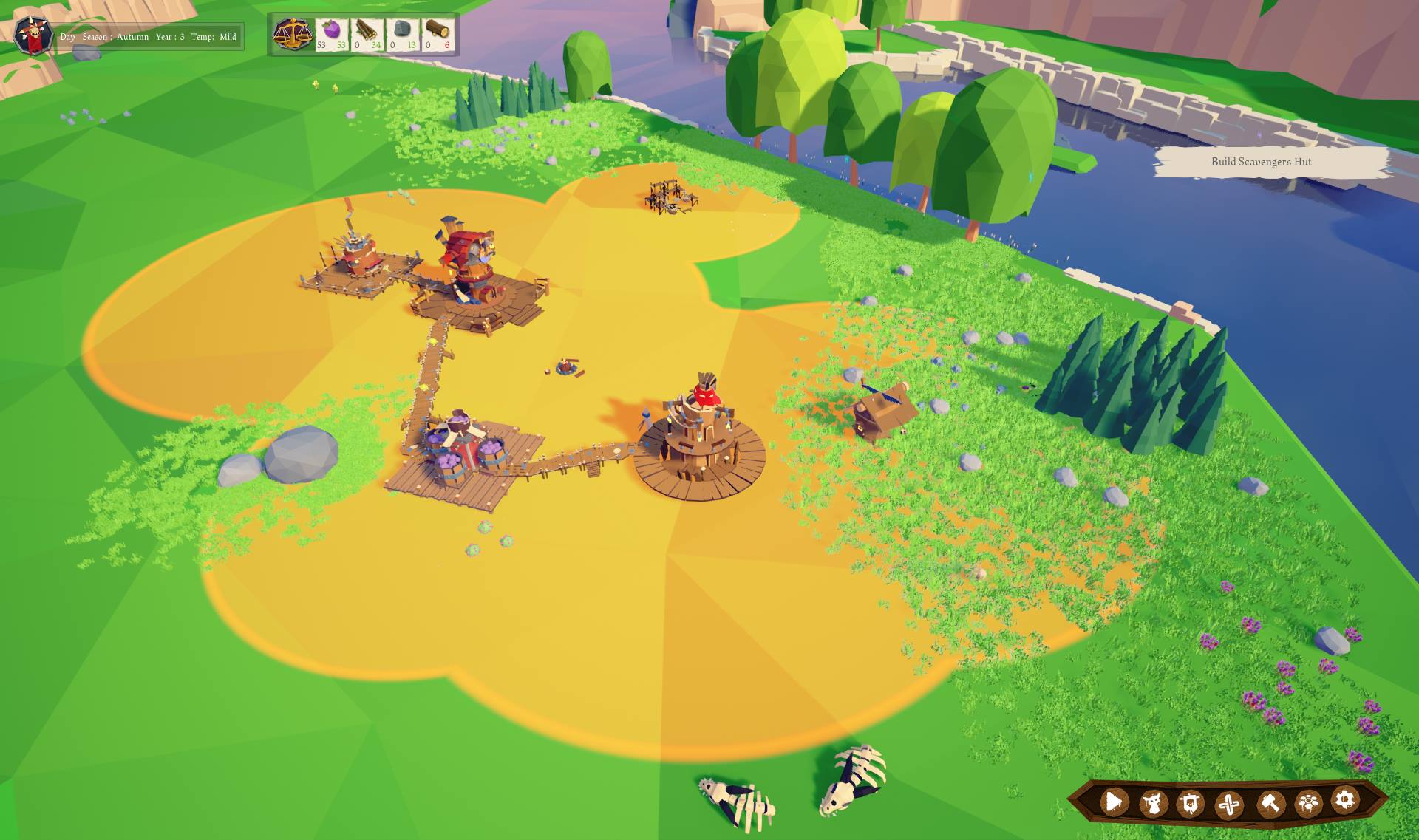 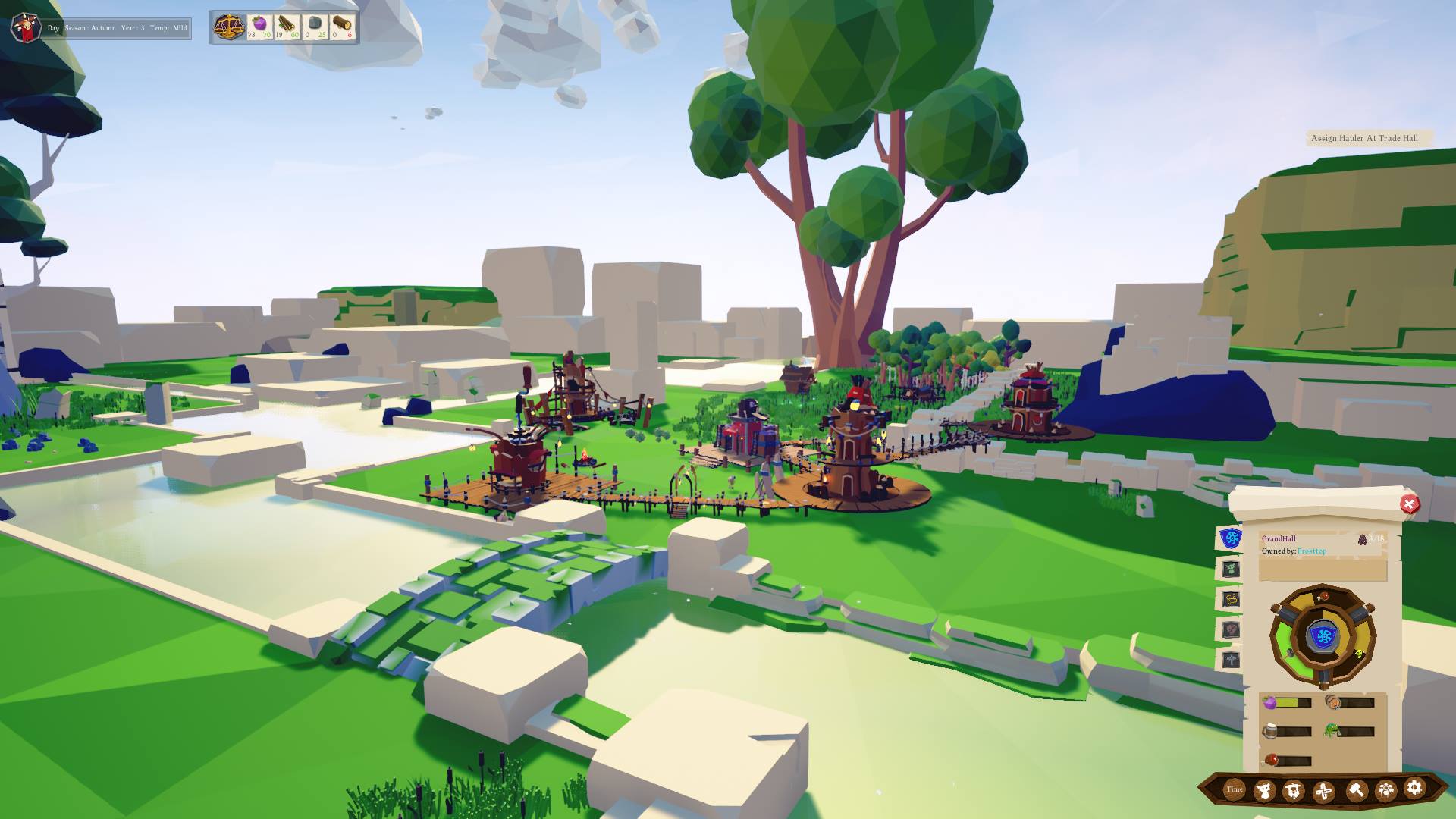 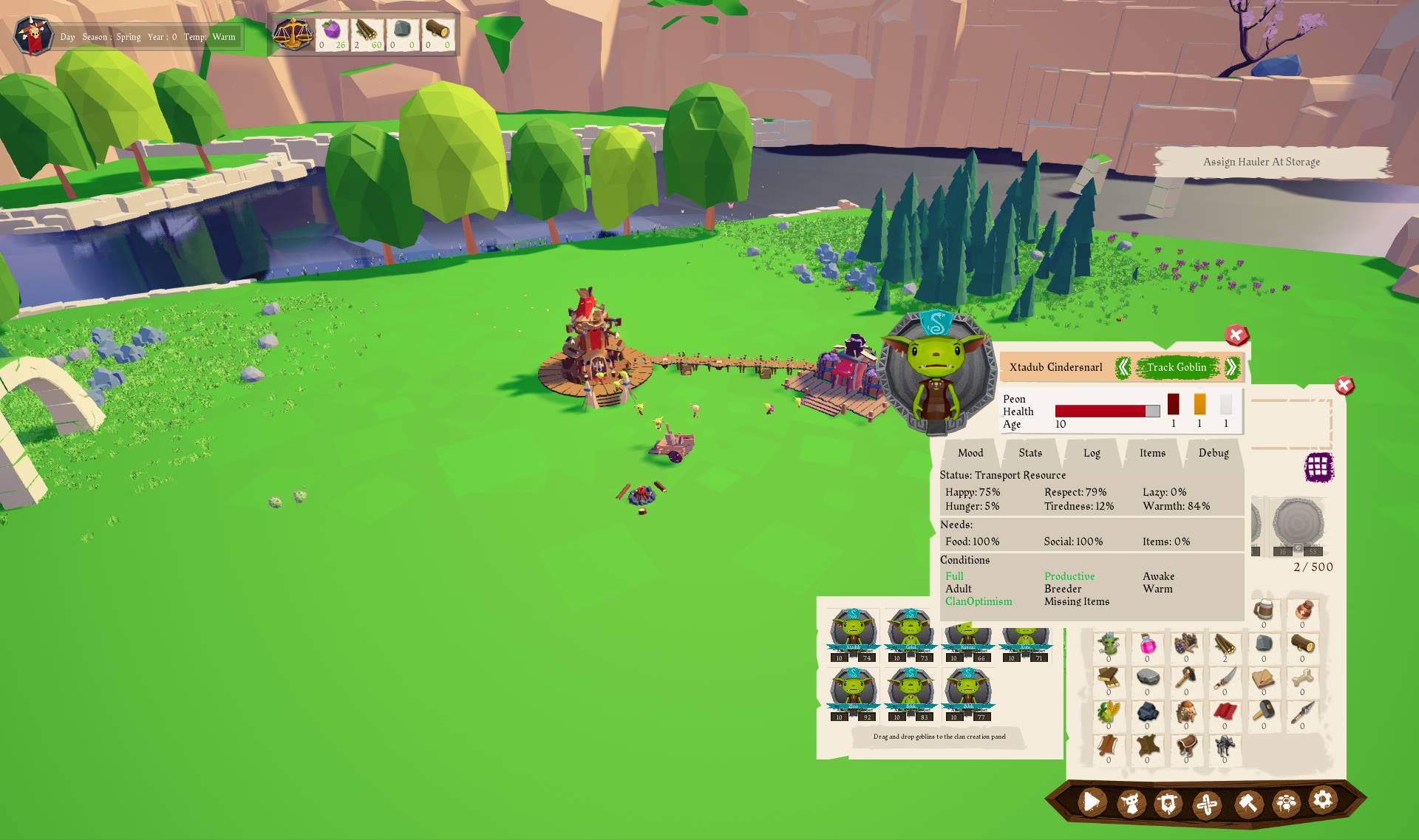 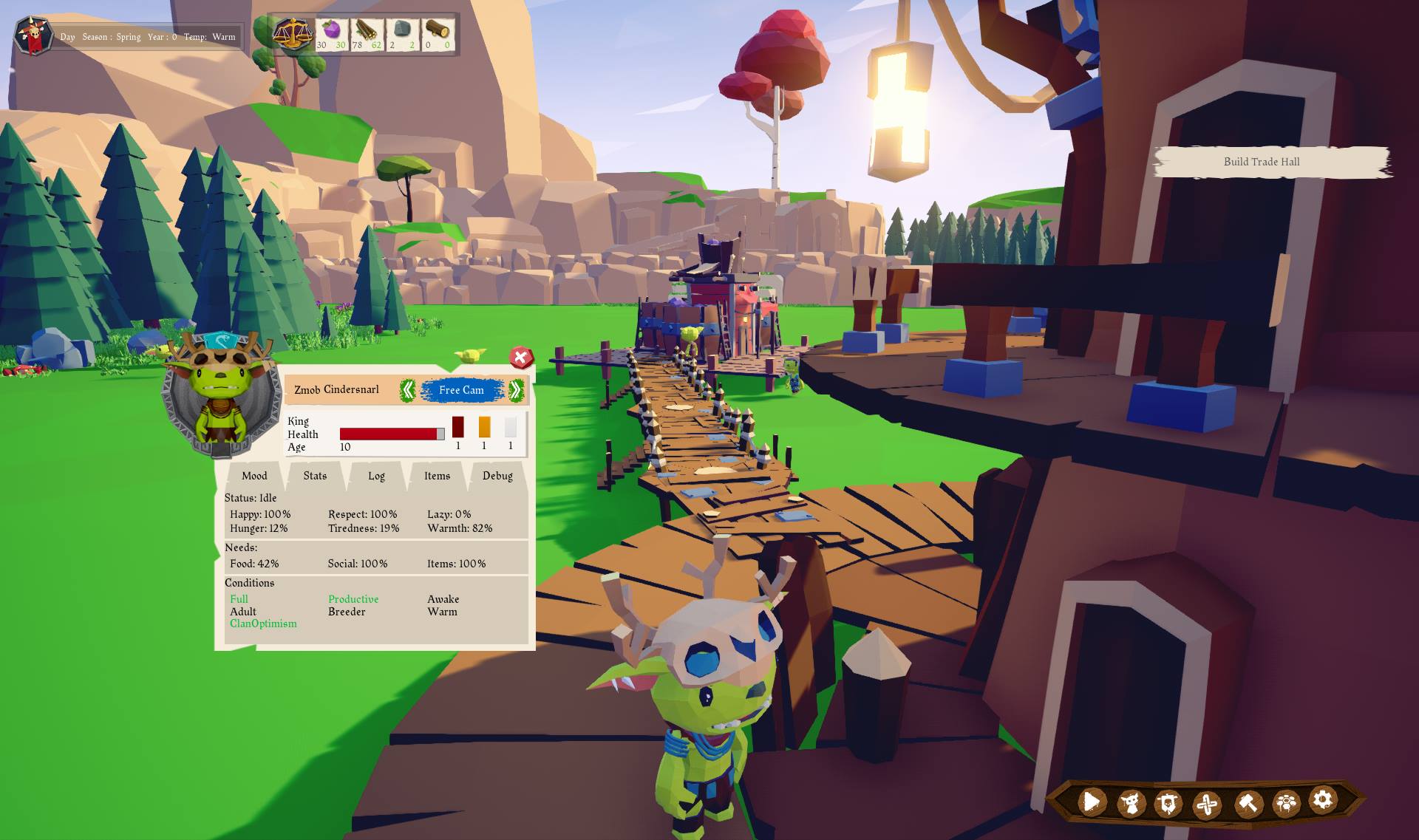 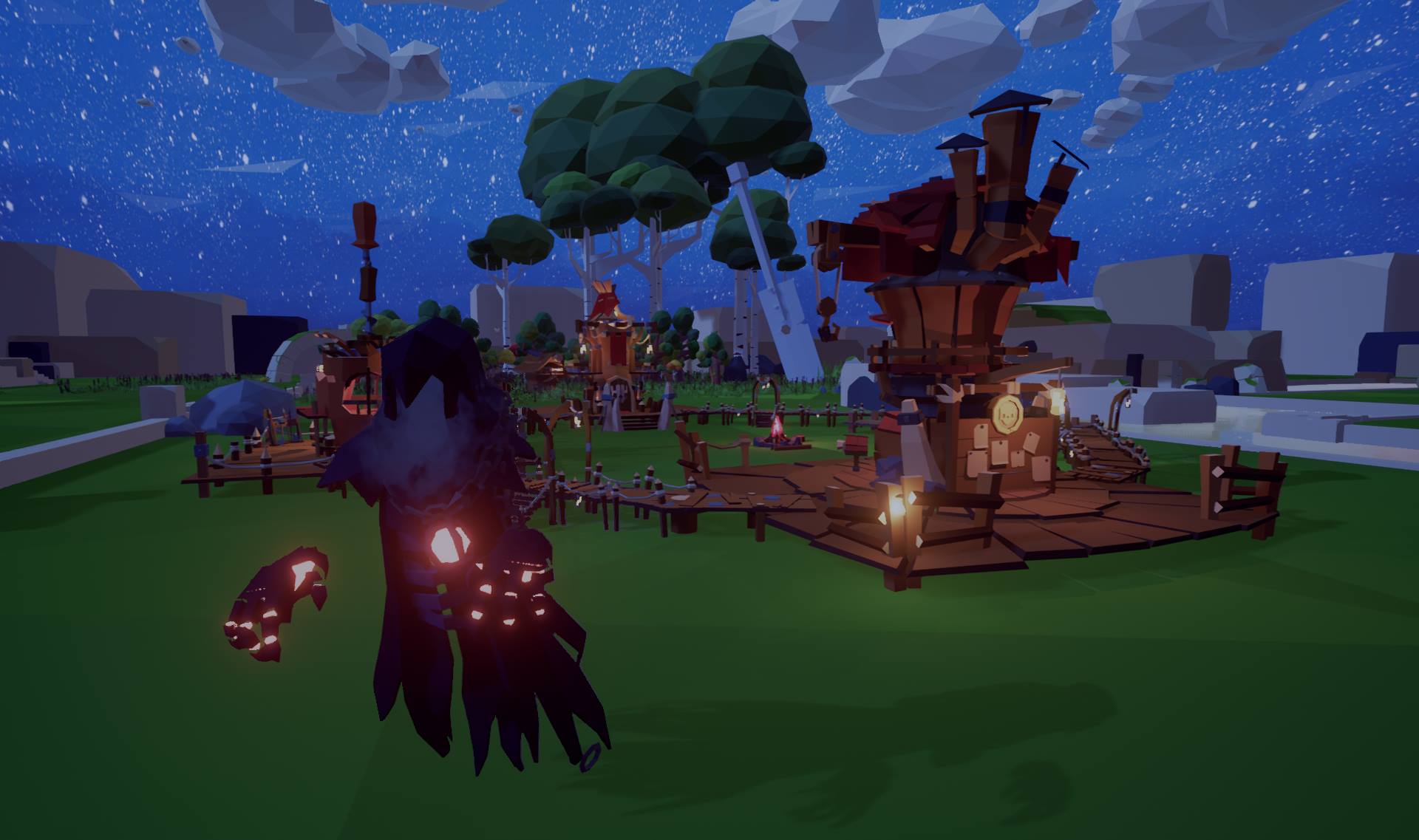 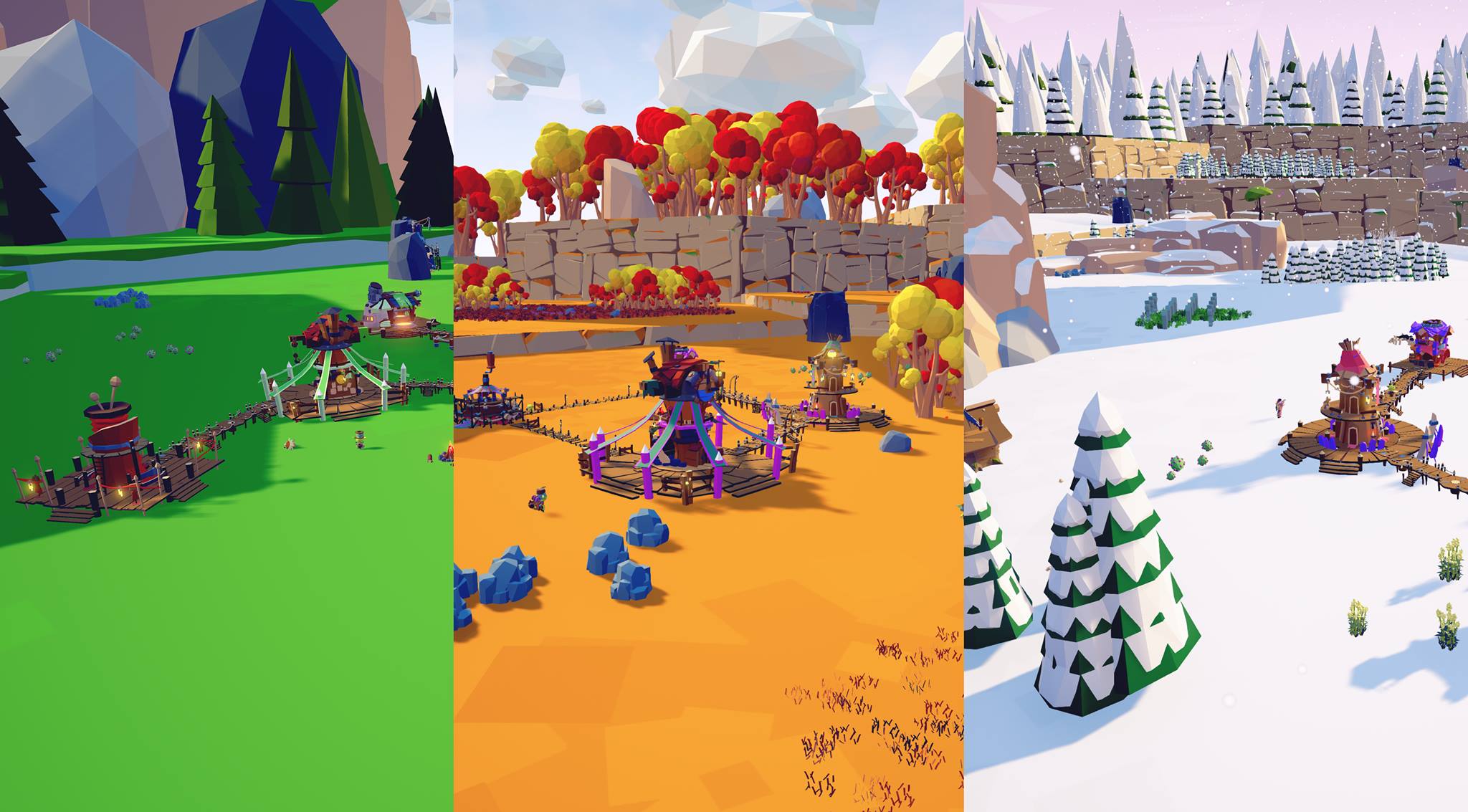 Goblins don’t like order or straight lines when it comes to building, but they are big on bridges. If you’re looking for some sort of grid-based building simulator, you wont find it here. In Elderstone building are connected to each other with goblin pathways and bridges.

Do you have the gift of the gab, or perhaps you’re just an exceptional gift giver? Is mindless threats and violence more your thing…  All of these skills are useful when it comes to keeping your goblin clan in line. Failing at this, you circle right back to bored goblin NPCs that kill and destroy; and you yelling at your goblin for really just being themselves. Though it’s fun to remember that just about anyone, including other races and even the gods, can be convinced to do your bidding.

One of the wonderful things that stood out to me is that Goblins of Elderstone has a great RPG story to it building simulator core. Elderstone is clearly a wonderful fantasy world where each story told is unique. During your gameplay you get to deal with travelling strangers, evil overlords, cunning dragons or benevolent gods.
With narrative by Edwin McRae, writer for Path of Exile.

As with any building sim, resources are key and Elderstone is no different.  With over 30 different resources that can be gathered, crafted, traded or stolen, your goblins will thankfully be kept busy with plenty of work to do. However don’t let you guard down on those cheeky goblins.  Get some Enforcers to make sure they do it. Your entire economy hangs by the thread of your goblins’ happiness and lazy bone!

Ultimately my micromanaging skills weren’t up to the challenge (this time!) of keeping clan Kittyboomboom from failing, when I had the chance to trial the game at PAX AUS . However my deep love of goblins remains strong and my desire to play the game again perhaps even strong!

The Kickstarter for Goblins of Elderstone finishes this weekend, so if being a goblin overload is on your  to-do list, be sure to take a look at their page.