Revolt with Magic the Gathering and take back the power!

First published in 1993 by Wizards of the Coast, there’s no denying Magic the Gathering has stood the test of time.  With close to the equivalent of the population of Australia playing the game (approximately 20 million as of 2015) there is little question that Magic is still the number one trading card game title.

Its success is both due to a loyal and dedicated fan base, and a creative team that has allowed Magic to evolve along with its players.  No longer confined to its tabletop beginnings, Magic has branched out into the digital world, taking to the mobile and console gaming sectors with the same haste as a 4/4 Enraged Giant, albeit at times with arguable success.

The game itself is deceptively simple and nearly impossible to completely master, with players battling against each other summoning creatures and spells using cards from five differently coloured land types (plains=white, islands=blue, mountains=red, forest=green and swamps=black) that dictate the style of play.

The latest expansion in the series Aether Revolt , centres around a revolt that has occurred due to the Consulate confiscating inventions and imprisoning inventors under the ruse of the Kaladesh Inventors’ Fair.

Recently myself and our very own Jimmy Twin were in attendance at the Magic the Gathering: Aether Revolt pre-release event here in Melbourne at the Alchemist’s Refuge (Games Laboratory), and boy what a night! 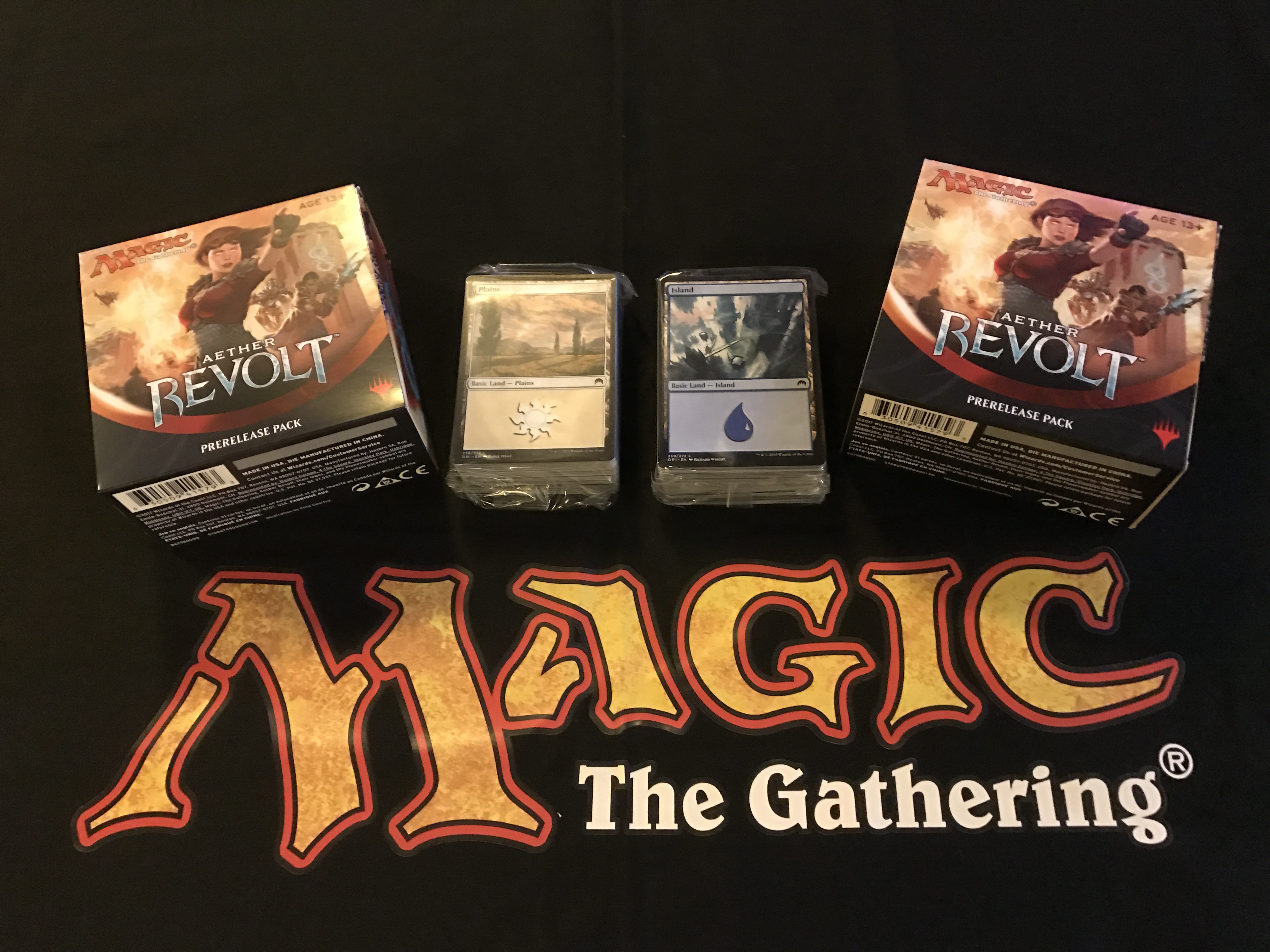 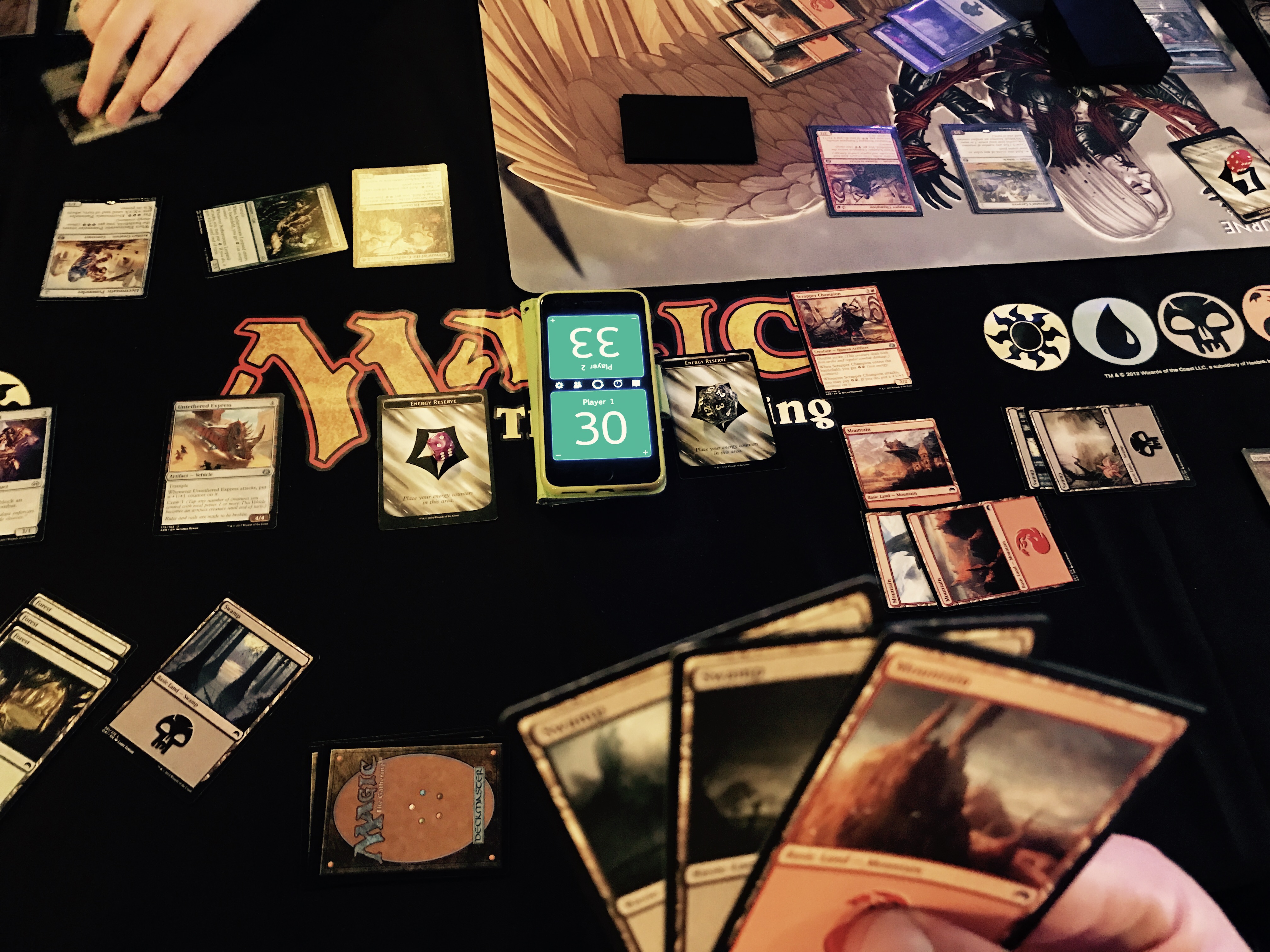 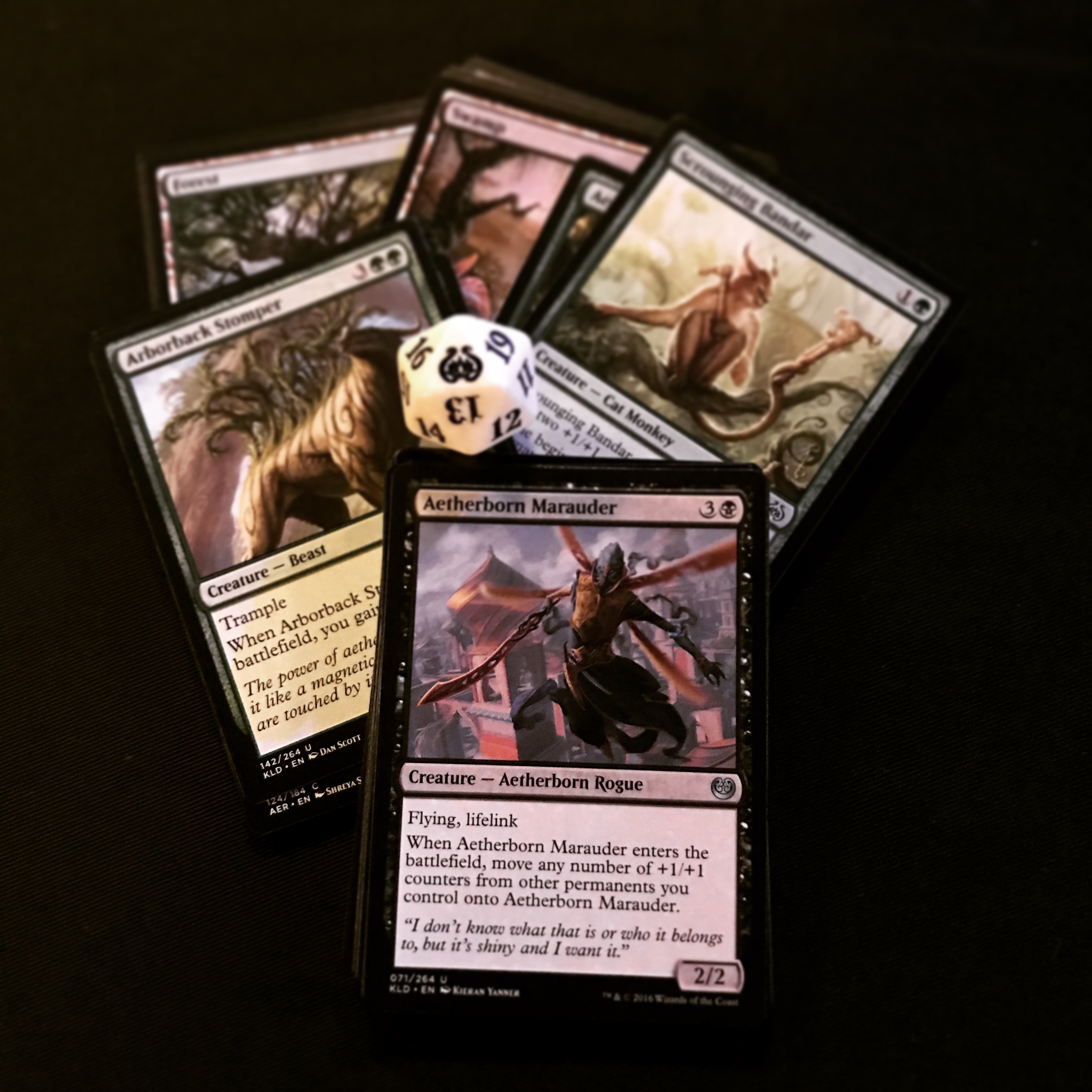 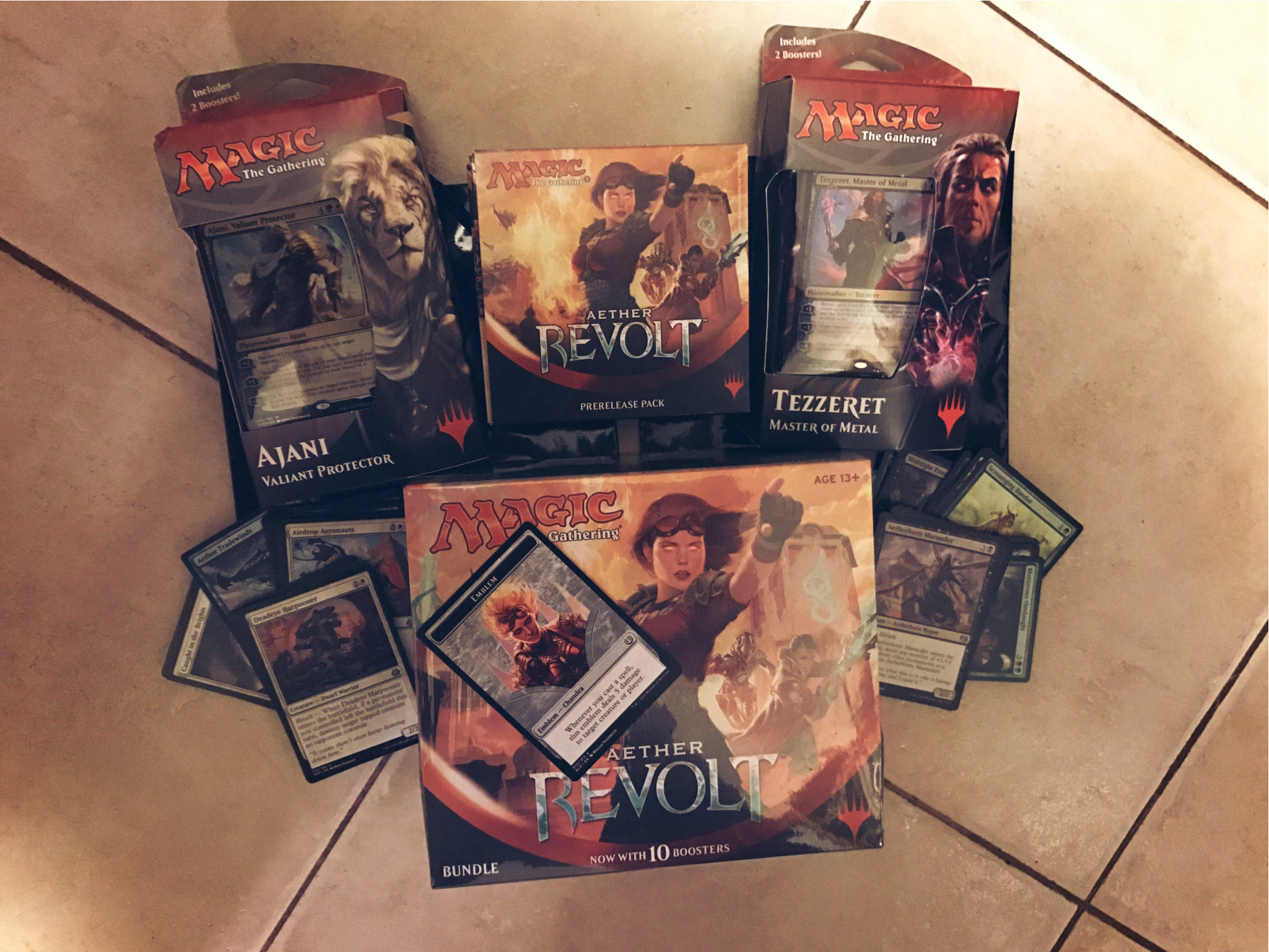 Rachel: I’ve always loved Magic, I remember my fascination started way back in 1995 when I was introduced to it by some friends at a youth club I attended and my love just grew from there. Sadly after many fun years of evenings and afternoons spent playing with friends life got in the way, like it so often does. Before I knew it 12 years had past since I’d added new cards to my Magic collection. With my 12 year absence from playing Magic on a regular basis or with a current deck on my mind I knew I was going to be in for a fun time. I came into the evening with a bunch of excitement, firstly at what the new deck would look like and secondly at being able to play Magic with people again after such a lengthy absence. My first impressions of the new Revolt deck and card abilities was that they were quite smart all be it overwhelming at times. There were a lot of fun texts on them and I was particularly taken by the art style and characters.

Jimmy: There is something akin to obsession when it comes to playing Magic.  Many, many evenings (and pay packets) of mine went to Magic card games and designing the ‘perfect deck’. Ok, it is an obsession.  And having an addictive personality, Magic and I were quickly bedfellows.  I will admit I have been heavily swayed by competing titles Hearthstone and Pokémon the past few years and curbed my addiction of Magic somewhat to the digital versions, and allowed my boxes of cards to carry dust.  Although all Magic expansions are accompanied by an elaborate storyline, Aether Revolt instantly sparked my interest with cards from all land types either serving the Consultate or trying to take it down as a rebel force.  And with my own overactive imagination I chose cards for my initial deck imagining myself being approached by Chandra to organise an elite task force.

Rachel: I have to say one thing which never changes is the feeling of sheer joy you get opening up a booster pack and gleaming its contents for the first time. Not only is it like Christmas morning, but finding you’ve gotten that elusive card you’ve been after can’t be beat. Then comes the joy of building yourself a deck with all the cards you’ve been collecting. There’s just something very satisfying about taking the time to read all the texts and figuring out what works well together. Due to my Magic hibernation however  I took the help which was on offer to design my deck or decks for this event. I had taken quite the shine to a particular card Scrounging Bandar  which is a cat monkey creature and thus based my first deck around this premise and having as many cats or cat creatures as possible!

Jimmy: Vehicles!  One of the major changes to gameplay with Aether Revolt is the importance of artefact items, in particular artefact creatures and vehicles.  While useless by themselves, tapping a few creature cards will turn these into forces to be reckoned with that can rapidly turn the tide of a battle.  Untethered Express is stopping all stations to victory!  Even those not wishing to utilise vehicles in their own decks need now to make sure they include cards that can deal with this threat.  The importance of artefact cards fits well with the theme of this expansion and many other cards featuring Improvise allowing artefact cards to be tapped for mana (like lands) and I also learned very quickly to be aware of those building energy counters.

Revolt is a new ability term with this expansion, with actions based on whether a permanent you control leaves the battlefield during your turn.  Although many of these actions do not seem to fit the cards it pays well to be aware of the fine print in intense battle situations. Although they (fortunately) did not feature in our launch matches, Planeswalker cards are still in play and feature powerful characters from the Aether Revolt storyline such as Tezzeret, Ajani and Chandra.

“Why Ragavan is only a Token Legendary Creature which is exiled at the end of combat, there’s nothing quite like pestering someone with your monkey.”

Rachel: When it came to gameplay I was highly impressed with both the new deck as a whole and it’s new abilities Improvise and Revolt. Revolt gives you all kinds of interesting bonuses if that condition is met while cards with Improvise let you use your artifact’s to help cast them. While I enjoyed using both of the new abilities I felt Revolt could sometimes fall short of the mark on some cards. Though this was quite possibly due to most of us yet failing to come to full grips with the decks yet as opposed to the actual cards failing.

Quite possibly my favourite thing about the new Revolt deck though would have to be Ragavan the monkey. While Ragavan is only a Token Legendary Creature which is exiled at the end of combat, there’s nothing quite like pestering someone with your monkey. Ragavan is created by another card Kari Zev, Skyship Raider, who just happens to have an incredible story which you can read here!

Jimmy: If you ever thought Magic needed a breath of fresh air, I urge you to try out Aether Revolt.  The beautifully designed cards depict an intense struggle between freedom and oppression with the artefact focus giving another layer of complexity.   Rachel and I agree that the Revolt ability is a tad lackluster but certainly adds to the strategic genius that is Magic!

Magic the Gathering: Aether Revolt is now available at Games Laboratory and all good TCG dealers.  Check out the awesome launch trailer with Chandra getting all fired up!