I wasn’t sure what to expect going into this interview. A game called Speaking Simulator, I imagine I will have to learn to speak, but to what end? Is this going to be like “Oh…Sir!”, where you just create cruddy insults to throw at each other? Will I have to buy the different pieces of my mouth after working odd jobs 9-5 like a farming sim? Or will I play as a robot with the latest speech synthesis technology, who’s mouth and tongue I have to control to form the different syllables of the words which will help me infiltrate the filthy humans’ trust? Oh, that one?

After playing the demo of Speaking Simulator at the Affable Games PAX booth, to say I had some questions would be an understatement. Thankfully, Jordan was on hand to answer some burning questions about the game.

The PAX demo of Speaking Simulator managed to cram in a short, very much needed tutorial, and one of the beginner levels of the game into a 5-minute chunk of concentrated weirdness. The controls for this game are somewhat reminiscent of games like QWOP, but take it a little further. You have two sets of controls, the mouse controls your mouth and jaw movements, with the standard WASD controlling your tongue. Your mouth is prompted to move into certain shapes while you have green lights in your mouth that you have to ram your tongue into, while avoiding the dreaded red lights.

It all sounds extremely simple in concept, but like games in the vein of QWOP and Getting Over It, the simple controls do nothing to alleviate the stress and complex nature of the game. The demo has you thrusted into a date with Karen from HR, and you don’t want to arouse suspicion, so you have only a certain amount of time to form each syllable before she starts giving you a written warning (and probably calls the police). Each failed syllable will raise suspicion, and can also cause your robotic shell to fall apart, not to mention the fact that you can accidentally, and quite violently, launch your teeth out your mouth with a misplaced tongue movement. I am not sure how Karen didn’t notice my ear popping out on a spring while I was trying to order a delicious coolant, but maybe I was just that much of smooth talker.

The demo was a very simple level, but the difficulty ramps up from there. I did not experience it, but there is a random event where your character picks up a spoonful of peas which you have to convincingly chew while also keeping up conversation. The full release of Speaking Simulator will be about a two hour affair and have more little events like that such as sneezing and playing musical instruments, which seems like an absolute nightmare. It will also have many different scenarios for your enjoyment such as a job interview, talking your way out of a speeding ticket, and giving your constituents a state of the union address after you have successfully enslaved… ah… been elected into office.

When it comes to the motivation and inspiration for the game, Jordan explained how it was a mix of the hilarity of watching AI’s trying to learn to speak, as well as seeing CG monsters speaking human languages when they don’t have the facial structure to do so. The result is a game that is very loosely based off the way humans speak, with a physics driven design that has no animations. This often leaves hilarious results, like what I am trademarking as the Bat Symbol Lips™ that I managed to tangle myself in. 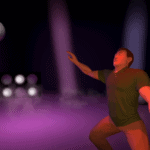 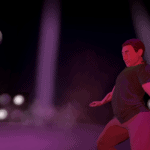 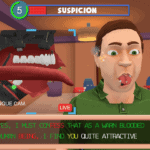 If this bundle of quirkiness seems up your alley, you can currently put this on your Steam wish list, and is expected to be released around Q2 2019. I would like to thank Jordan for his time, and for giving me one of the teeth I knocked out of my AI in a jar to take home. No, I am not kidding.