The 2019 RMIT Games cohort of aspiring Melbourne developers put on an outstanding event this year. The Bachelor of Design (Games) students showcase their hard-efforts and passions with a resounding night of friendly faces and quirky projects.

Over 16 unique and stylised games by fledgling artists, programmers, writers, and designers presented. If there was one thing to take away from the night, the future of Australian-made games is going to be remarkable. 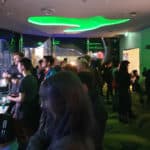 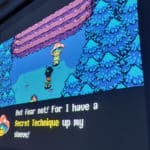 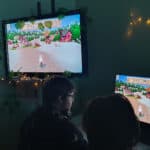 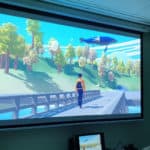 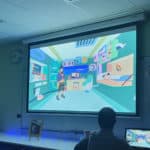 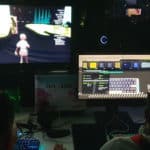 The night began with mingling over baked pizza, dips, and drinks with an opening address by Lisy K. The founder of Girl Geek Academy and League of Geeks Lead Producer is a popular local Melbourne developer with heaps of experience. Talking about her rise in the games industry and finding her passion certainly inspires the graduating students and attendees. Lisy speaks highly of making connections and finding friends within the games space.

Events like the RMIT Games Showcase is the perfect time to create those relationships and express each student’s artistic dreams. The incredibly detailed projects developed by solo or small teams all took place over one semester or roughly 14 weeks. Bonding over their love for gaming, telling stories, and creating art gives those ideas and professionals time to really shine.

Pixellated by Zahraa Al Zubaydi and Naomi Ruys sets a cyborg child among a multi-dimensional universe. The game starts with a painted watercolour style in a colourful home. The player explores their surroundings, putting pieces together about how the blue-haired character is adapting to the world around them.

After stepping into a dimensional rift, the game becomes pixel art with a key-press mini-game. The two opposing worlds they are apart of represents a cultural subtext. Zubaydi and Ruys representation of differing art styles reflects adapting to different cultures in real life. The difficulty with finding oneself in a new city or learning the ins-and-outs of another home is a powerful subtle subtext.

Zubaydi and Ruys aim to bring the game to online stores like Steam in future. It is currently on itch.io for anyone to experience. Pixellated only left players wanting more, and everyone will be waiting to see how the game evolves.

David Chen and Danna Yun put together one of the most impressive games of the night. Spiritwell is “an RPG about a lost child who falls down a well into a world of spirits“. The game features a beautiful retro pixel-art style and hilarious writing that feels like Mother. Set within a fictional, Japanese inspired world full of takoyaki and mushroom creatures, a real sense of love for design is present.

Something about the use of vibrant colours against detailed environments makes this stand out against indie-retro games available. It’s strange, it’s funny, and it’s a story-rich journey that attendees loved. Chen and Yun plan to release a demo for Spiritwell in early 2020.

crtl//SHIFT is a typing RPG set in Melbourne CBD with its own mechanical keyboard customiser. Veronica and Ben, the two-person team, are lovers of all things anime and PCs. Starting as an experimental keyboard designer, the pair decided to turn it into a game with Persona dialogue within a cyber Jet Set Radio styled world.

The AR dominated Melbourne Central features a crew of cyber-graffiti artists who hack into environments by speed-typing. Farell, Ain, and Sofia get into mischief and build word banks as the player types to electronic-art victory. ctrl//SHIFT is striking and undoubtedly special. Mechanical keyboard diehards will not want to miss this on itch.io.

Queer Space Pirates created a crowd simply for its fantastic name. A passionate team of five behind this vibrant Point-and-Click gave a quick glimpse into this episodic adventure. Apollo, the captain of a strikingly styled vessel, encounters a critical failure… when a long-lost friend (and potential lover) comes to their aid. It’s all about queer romance, jaunty visual novel fun, all wrapped with light-hearted writing and design.

Nathaniel Bott, Alex Leheny, Wei Yeh, Clair Cooke, and Avery Hutley put outrageous amounts of creativity into this project. Playing Queer Space Pirates demo at the RMIT Games Showcase is like going to an ice-cream shop and tasting a flavour before buying. You leave only wanting more and more and end up buying a quadruple scoop with extra rainbow sprinkles.

Every developer and their games show incredible ideas and talent. Melbourne is clearly a garden for magnificent interactive projects. From the beautiful art, the intuitive design and mechanics, or the witty writing of this cohort; each project has a bright future ahead. Our city is full of amazing developers, and these people are a strong part of it. Congratulations and best of luck to all who exhibited at the RMIT Games Showcase 2019.