YesterMorrow is a charming little game by developer Bitmap Galaxy and published by Blowfish Studios. This 2D adventure platformer tells the story of Yui, a girl who is trying to save her family from unknown dark forces. Though she does not know how, Yui is able to somehow travel backwards and forwards through time. She will need this ability in order to successfully deal with the shadowy threat.

While YesterMorrow doesn’t immediately have you on the edge of your seat, the game effortlessly evokes a very charming and chill aesthetic similar to other notable 2D based games like Wildfire. The calming music and light colour palette all lend to a wholesome aesthetic that becomes more effective in hindsight when the world suddenly turns dark and ruined. While time-travel isn’t exactly a new trope to be implemented in games, YesterMorrow does put forward some interesting ideas that I’ll be curious to see fully fleshed out when it eventually releases.

Being a platformer, wall jumping and navigating hazardous enemies are par for the course in YesterMorrow. While the demo didn’t leave much to really show the game’s strengths, there are hints of deeper platforming mechanics that will surely make for engaging play scenarios. One detail that was especially interesting was the ability to latch onto and climb the webbing of enemy spiders. This essentially turned a hazard into a necessary piece of the platforming puzzle, manufacturing increased risk should you fail to time your movements correctly. 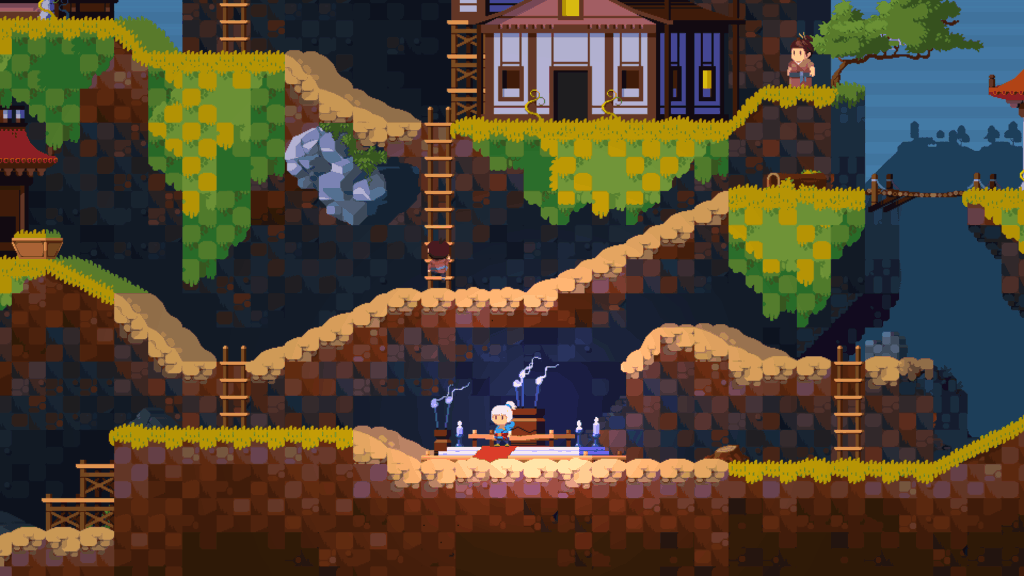 YesterMorrow has a great kinetic energy thanks to both its soundscape and visual animations. Leaves get kicked up as you run and roll your way through levels, rushing winds can be heard near cliffs and various dogs and cats (which you can pet! Confirmed) can be found scattered across the level. A nice little challenge for those who want it.

While a release date is yet to be finalised, you can check out the game’s prologue on Steam thanks to PAX Online. Do keep in mind though, the game is only playable via a controller at this time so make sure you have one handy! The game will be available on other platforms besides PC, those being Xbox One, PS4 and Nintendo Switch.

For more information about YesterMorrow, be sure to check out their website.