The PlayStation 5 has landed, ushering in the next generation of console alongside the Xbox Series X. Whether you’re a Sony fan or a Microsoft enthusiast, it’s hard to deny that the PlayStation 5 has a bit of a leg up when it comes to its new video game launch lineup. Although for the purpose of this feature, I want to focus on one particular launch title, Astro’s Playroom. Coming packed-in with every console purchase, Astro’s Playroom is considerably better than I expected. It’s a textbook pack-in title and probably one of the best we’ve ever seen. And that’s something worth celebrating.

Console pack-in games are certainly not a new concept. They are often a showcase for a new piece of tech. A sweet bonus when you buy a new console, knowing safely that you have at least one new title to play. Historically, pack-in titles can be a little gimmicky. You’re unlikely to ever get a console pack-in title that’s a huge, big-budget, highly anticipated release (that is of course unless it comes in a more expensive console bundle). Instead, pack-in titles are more likely to be smaller products that ease you into a new piece of hardware.

Over the years, the console pack-in title has seemingly become less and less popular. Gone are the days when your new Atari, Sega or Nintendo console came with a free game for you to play. Many will remember the Wii arriving with a copy of Wii Sports, although, unbelievably, that’s a rare example of a more modern console pack-in title. With console manufacturers losing money on the sale of the console and only recouping their losses through the sale of video games, I suppose it’s not surprising to see these little freebies go the way of the dodo. Although that’s only a small part of the reason Astro’s Playroom feels special.

Astro’s Playroom is a textbook console pack-in title because it introduces players to the new generation of PlayStation. It’s a game I can safely say that all PS5 owners should play, and one I’d even recommend as the first game you check out, no matter how hyped you are for Spider-Man: Miles Morales. It welcomes players into the PlayStation family with vibrancy and enthusiasm and it tutorialises and showcases all of the cool new features you can expect out of the console and the DualSense controller.

Astro’s Playroom is a journey and a celebration through the history of PlayStation. When you think of generational leaps, you think of pretty monumental steps forward in the hardware space. Each level of Astro’s Playroom is themed after one of these generations and whilst exploring you’ll uncover all of the things that made those generations so special. From the artefacts you find, to the references hidden within the game, to the music playing in the background, and even the tiny details of the world you’re traversing. It’s all PlayStation iconic and hits you with a wave of nostalgia. It also reminds you of what steps were made along the way, which is really clever, because it gets you to start thinking of what steps are being made right in front of you, on your cool new system.

“Astro’s Playroom is a journey and a celebration through the history of PlayStation.”

The even more impressive thing Astro’s Playroom does is invite players to see the new features of the new hardware. Fast loading is immediately obvious but it’s what the DualSense controller can do that will leave you astounded. Adaptive triggers means there’s more precision and a feeling of power or struggle that comes with something as simple as holding in a trigger. The game shows off what these triggers can do and why players should be excited in multiple ways. The simplest way is allowing players to zoom in on artefacts incrementally depending on how forceful they are with the triggers. It’s a simple touch but one that actually showcases how each little bit of extra pressure you apply is mapped out by the triggers and can have a real impact on gameplay. Applying enough pressure and the triggers will click into place, a satisfying moment that the game utilised in a couple of different ways, including drawing a bowstring back to its furthest point before releasing.

Motion controls and the controller’s front-facing touchpad aren’t new things for PlayStation, but Astro’s Playroom definitely had its fun showing off these features and helping people new to the PlayStation family learn all the bells and whistles. The built-in microphone was also utilised, allowing players to blow into the controller to power fans.

Where the DualSense and Astro’s Playroom really shines though is with the built-in speakers and haptic feedback. It’s incredible. Neither are new technologies, but they are advanced in such a way that you get that feeling of the next generation. They are cool and immersive, and unlike something like motion controls, they are the kind of feature that every single game will benefit from. It’s hard to describe without actually getting your hands on the controller, but imagine trudging through snow or plodding around on metal and every footstep feels correct. The sounds you’re hearing and the texture of the world is all mapped out in such a precise and captivating way. The haptic feedback lets you feel the weight, tension and impact of your actions and movements unlike anything else I’ve experienced.

Yet it’s the kind of feature that’s so intuitive that you’ll get absorbed and forget that it exists. It’s amplifying your gaming experience without forcing you to pay attention to it and drawing your attention away from the important things happening in front of you. Flipping around and checking out other PS5 titles it becomes clear, haptic feedback can amplify any game, but Astro’s Playroom still feels like the best implementation I have seen of the feature yet. So there’s definitely still some learning for developers to do who want to utilise this feature. Let’s hope that happens, because it will be more than worth it. 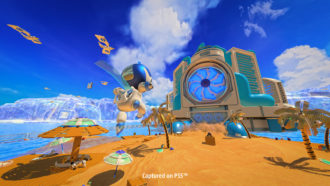 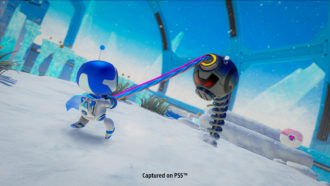 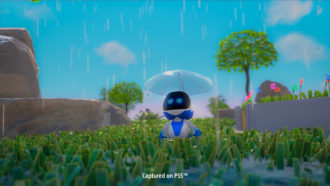 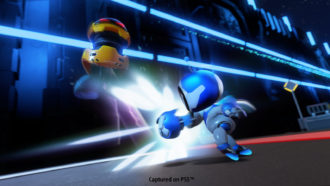 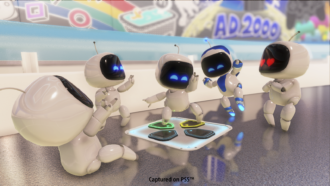 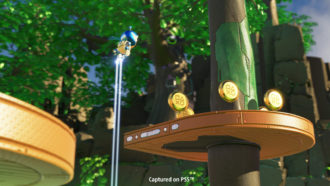 In many ways, Astro’s Playroom feels like it’s as useful for players as it is for developers. You can check out and learn the new features of the DualSense and the PS5 and look forward to what the console can achieve in the future. I’m a PC gamer who would normally rarely ever touch a console, but even I can start to see what the PS5 would be able to offer me that a PC just can’t. That’s an exciting feeling to get after playing just one console pack-in title.

I think it’s pretty clear that Astro’s Playroom is a textbook console pack-in title. It’s a celebration of the new tech that gets you excited about the brand and about the future. It showcases and helps players learn all of the new features that the console and controller can offer. It even revitalises a dying practice of providing a free game with a new console purchase. But more than that, it’s also just a delightful experience that every PS5 owner should play. The game is short, making sure to not overstay its welcome. But within the few hours it took me to complete Astro’s Playroom, I found myself gleeful and giddy. Not just because GPU Jungle has an absolute bop of a tune playing throughout the level, but because I can see what talented developers can do once they’ve had some time to get used to this system.

The possibilities here feel huge and I desperately want to see what happens next.