Fuser is, for better and worse, a more streamlined Dropmix

Many games have affected me personally over the years, but none quite as much as Harmonix’s DropMix. Released in 2017, DropMix is easily the game that I have been most hyped about. It allowed players to remix and mashup music by putting physical cards onto a DropMix deck, with the game’s clever programming allowing the game to re-pitch and adjust the songs to all work together and sound surprisingly good. I give DropMix a lot of credit in altering the course of my life. The opportunity to remix tracks on the fly led to the kind of experimentation that propelled me back into music. Among all the chaos of this year, I’ve even started releasing music on Spotify as “PYRYTE”. I say all this to try and communicate how much of a landmark title DropMix has been. However, this didn’t change DropMix’s quick and brutal demise. Harmonix saw the faults and so they’ve taken the idea of DropMix and have moved it into a more accessible release in the form of Fuser, the first title from Harmonix’s partnership with NCSOFT.

Fuser exists primarily as a vehicle for awesome mashups. Each song, including a fantastic roster of licensed music, is split into four tracks: leads, melodies, drums and bass. You pick the stems, and the game does a good job of weaving them together. Everything is adjusted to match the key and tempo, which allows them to work pretty well on top of each other. Granted this won’t always be perfect. A super-fast song being slowed down and put in a different key will sound a bit weird. However, all things considered, it’s a pretty good middle ground of creative freedom and good beats. One big way Fuser differs from DropMix is that the game goes fully digital, allowing the player to take on the role of a DJ at a massive virtual concert without the need for physical decks or cards.

Whilst the game is overall a very good idea, one part of Fuser I’m not quite as sold on is the custom instruments. The simplest explanation is that there’s a bit of conflict between what it is, and what it wants to be. It wants to be an added layer of customisation. It wants to give players the ability to properly control the music. It doesn’t necessarily fail at these wants, but it does end up feeling a bit thin. The customisation amounts to pushing random unmarked buttons, which kind of abstracts a bit of creative control. Maybe the ability to pre-record some longer loops might add to the experience. Maybe making buttons taggable or something might help. But as it stands it’s a bit throwaway.

On the other side of the coin is the audio effects. In a move not dissimilar from the “creative loops” there are appliable effects. All of these come in the wrapping of something remarkably familiar to me as a producer. It’s nice I suppose, as it really is teaching people some ins and outs of production. It demonstrates the “muffled” sound of a low pass filter. I’m a personal fan of the glitchy stutter. I can’t fault them for the feel, I use effects myself that use such an interface. The thing is, unlike the creative loops, I don’t mind the effects that much. A lot of this comes down to the simple fact that the effects are much more intuitive. Effects are simple, replicable, and explicit in their modulation of the audio. So you can have a bit more of an ownership of the mashup.

There are of course so many other features in place here. Track queueing let’s you drop up to four tracks simultaneously, and risers let you entirely switch things up. Track switching, muting, soloing, ejecting and track volumes let you really flip sounds as you see fit. The sheer array of mechanics on hand is insane. There’s a reason that the campaign is mostly one giant piece-by-piece tutorial. In the grand scheme of things, most of these land on the “effects” end of the useful and intuitive scale. The fact that I could list them wholesale speaks to how intuitive the systems are for the most part.

“The thing is, unlike the creative loops, I don’t mind the effects that much. A lot of this comes down to the simple fact that the effects are much more intuitive.”

Now as fun as mashing stuff up is, Fuser really needed some game modes to keep things interesting. The default, for all intents and purposes, is the freestyle. Just mash stuff up, have fun and just keep doing it as long as the spirit moves you to do so. I kind of say it’s the default mode because it really is just the purest form of the game. Other modes are generally building on the base model of this game.

I’ve spent most of my time in Fuser’s main single-player offering: Campaign. I have mixed feelings about Campaign. It’s like freestyle, but with bonus objectives. Some will come from the stage’s promoter, directing you to do certain things. This can be anything from laying down specific tracks, changing key and tempo, removing tracks for the outro, and the like. Sometimes these are timed in the form of having a certain number of bars to complete objectives, sometimes you’ll have as much time as you need. This is a smart system for delivering tutorials as little hurdles can test to make sure players are keeping up. However, as anticipated, there are some flaws with this system.

From the start, I worried that it might be creating a scoring system that is not quite up to par. It feels like, to bastardise a linguistic term, a “prescriptivist” system. To judge the mixing, the game has a system with rules that dictate what “good music” is. The problem, quite simply, is that such a system won’t always make stuff better. The stage boss will ask you to bring stuff in and take stuff out, for example. This helps create a bit of a “narrative arc” to the set. It may start slow, and build up before a slow track-by-track ejection break down. I appreciate this somewhat, but invariably to follow the leader means overwriting your mashup. Fantastic combos get ejected out of existence, replaced by whatever the computer likes.

“To judge the mixing, the game has a system with rules that dictate what “good music” is. The problem, quite simply, is that such a system won’t always make stuff better.”

The other issue with Campaign is on a more nebulous level. Generally the game seems obsessed with switching stuff up a lot to keep the crowd interested. I mean, hey, as a someone who makes music and gives feedback to other musicians, yeah that’s true. In the context of Fuser, however, that meant sending mash-ups into an insane level of flux. A fine system on the surface, but one that led me to get 5-star sets, where I lacked the satisfaction of a good mix. Any great combo had to be immediately shuffled into a new set of disks, as changing stuff around to an obsessive degree is the only way to score the 5th star.

The other two modes are online. One is a co-op mode which is essentially just freestyle but passing the controller around. Sure it has the added bonus of online, but otherwise not worth discussion. Instead, I’ve focussed my time on its competitive mode. It’s an interesting twist on the standard mechanic. The requests and timing mechanics are used to mediate fighting over the four available slots. Based on the timing, and the requests met, slots have a certain energy level that is integral to the game: the higher point value in a slot determines who controls it, and the higher total point score of the slots deals damage to the opponent’s health. The energy level also ticks down every 4 bars, ensuring that the slots will open and close and reopen over the course of a round. 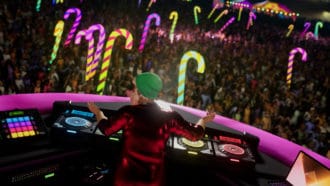 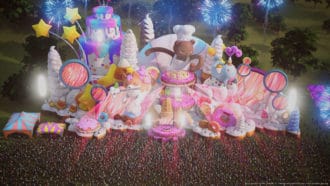 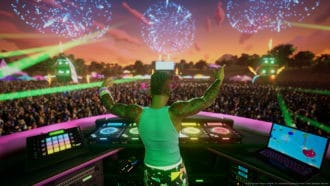 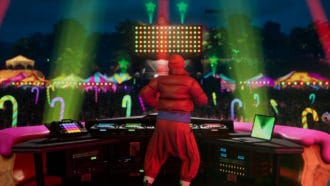 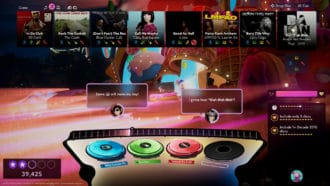 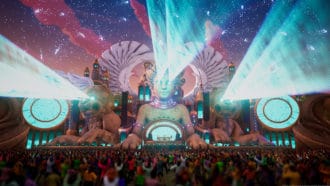 I mention all this in detail because to me I very much prefer the battle systems to the campaign one. Whilst they mostly focus on the same mechanics, scoring in battles is adjacent to music, rather than controlling the music. There is a natural flow to the music, because of the inherent tug of war of the mode. It’s much more of a facilitator. It pushes you into different combinations that exploit advantages.

After everything, I’m not really sure how to feel about Fuser. Generally, I feel like this is a massive step up, gameplay and general accessibility-wise compared to Dropmix, regardless of my grievances. However, it felt a bit disappointing, perhaps because it feels less special. The novelty of the music mixing game has worn off somewhat, and the game has for better or worse fallen in line with current standards of gaming.