VR is absolutely still a big niche. A large market of games in the space are still glorified tech demos. I say this, fully aware of the irony of us now running a ‘VR Corner’ feature. Still, sometimes you’ll find a game that breaks through the norm of titles in the platform’s space. Half-Life: Alyx is absolutely one of the more recent and notable ones. Similarly, Lies Beneath follows the same vein. Ahead of you lies a horror scape. Quick thinking and the use of your virtual in-game environment is required to make it through.

Lies Beneath has quite the interesting survival horror premise. Players take the role of Mae, a college student that’s returned to her hometown of Slumber, Alaska. Suffering a violent car crash, Mae is ripped from her father and must overcome dangerous enemies and monsters to reunite with him. Can you pull off this fight for your life?

Really, that’s all you need to know for Lies Beneath. This is a game that takes quite some thematic and scenic twists that are left better experiencing for yourself. Changing environments, creatures almost Cthulu-like in nature and a village that looks right out of Resident Evil 4 all await you. Already, it’s vastly different from the other games in our previous VR Corner coverage. It’s eerie and fun, albeit sometimes a little clunky, but if you’re at all into experimental horror, especially in the VR space, then this is a game for you.

Lies Beneath is one of those games where interacting with the environment, manipulating and using physics and the likes are key. You’ll face enemies that’ll require different methods of being taken down, meaning you must be quick on your toes. As such, a wide variety of both melee and ranged weapons are at your disposal. It’s a bit silly in the setting of a horrific village, but one example is that you can find a silencer mod for a pistol. This’ll help pick off enemies one by one, not alerting others. Juxtaposing this, you can find fuel canisters that you can pick up, throw and pop off a shot on, alley-ooping a series of kills in one explosion. You have to be quick and creative in Lies Beneath, and I love when games ask this of you, especially in VR.

One example that absolutely comes to mind when thinking of Lies Beneath’s quick nature is a face-off I experienced in a desolate cabin. Here players are first given their shotgun, along with bear traps that you can snare your foes in. Then, a large wave of enemies rush you, crashing down windows, doors and coming at you from all angles. Rarely in VR have I had to turn around and move this much, reacting as quick as possible. Maybe a freakish pig-like man will rush me from behind. I can hear it coming but I know I need ammo. So, I scurry as quick as I can to the bedside table in the cabin that has shotgun rounds in it, quickly loading them on my person and then snapping around to pull off a last second shot. I’m safe. The game doesn’t always keep up this fast pace (it absolutely allows for moments of breathing) but when it does it’s fantastic.

“Lies Beneath is one of those games where interacting with the environment, manipulating and using physics and the likes are key.”

Moving back to the physics of the game, there’s a lot of other ways you can mess around. Melee weapons in the form of cleavers, knives, axes and stakes are on offer. Often you can lob one of these at a foe, delightfully watching their head blow off in cartoonish fashion. Other instances saw me wedging one in a wooden wall in a combat arena as my inventory was full. This then allowed for a saving grace in running over to pick it up and then use this as a weapon when everything else on me was spent.

Puzzles are quite aplenty in Lies Beneath also. The most prevalent form is a hook that you’ll often find attached to a mechanism that keeps a door down, rather than elevated for you to pass. Hook this up to a specific spot that holds the mechanism in place and you’ll be golden. Later on, a spear gun is provided to you, leaving the opportunity for new puzzles in the form of debris being pulled and cleared granting access to other routes previously unavailable.

Combine this with inventory management, making it through areas by the skin of your teeth and you have quite the apt VR survival horror game on your hands. Really, it’s unlike any of the other games I’ve checked out in our VR Corner feature segment thus far and I love it for that. Maybe you’ll have to get rid of an axe so you have room to carry that handy revolver. Or maybe your search for food in breakable containers brings no prevail. Then, you’ll have to trudge it through until you find the refuge of another save point in the form of a campfire or lantern, hoping there’s more supplies there. Lots of quick planning will be needed to survive your journey in Lies Beneath, all of it welcome as a survival horror nut.

Lies Beneath’s other big seller is the oozing-with-style art direction the game follows. You see, the game is set within a graphic novel adventure. In large, shifting moments you’ll find yourself looking at an actual graphic novel, turning the pages and reading exposition before moving into the next moment of gameplay. Even in the world’s environment, you’ll see blocks of narration that you creep by. Upon the start of a chapter, that very chapter’s name will also appear in imposing, red and bloody letters. Onomatopoeic words will appear when you blast dastardly monsters to smithereens. It’s really stylish, and hell, not out of the question to feel like you’re in your own Robert Kirkman adventure.

The game also does well to capture the environment of a horrifically turned Alaska. More often than not your view distance is limited by immense amounts of snow fall. The village that you’ll explore is eerily quiet, until it isn’t. You’ll travel across thin ice that cracks beneath your feet. Be reckless with this traversal and you’ll fall right in. One of the most unsettling but visually striking images I saw in the game was the remains of a deer, suspended by strings on trees in a forest, neatly disassembled like a corpse in the TV series Hannibal. This game offers a lot of mood setting and it does that mood setting really, really well.

So many neat little stylistic choices and touches were made throughout Lies Beneath. At all times you have a zippo lighter with you. Hold it up and the embers it emits direct you in a general direction of where you need to go. Position it close to a gun you’re holding and you now get a crosshair. Do this while aimed at a foe and you get an x-ray view of them where you can find weak points to shoot, something that’s definitely most handy on the more meaty enemies. If I were to put these touches into short form it’d just be me performing a chef’s kiss, honestly.

As alluded to earlier, Lies Beneath also takes some very Lovecraft and Cthulu inspired turns. Creepy mutant-like creatures such as large bouldering pig-men will face you in slightly clunky boss fights. You’ll take on creepy crawly spider looking creatures with deformed human faces that pop into goo when shot. It’s very eerie, very gross and very fun for people that are fans of that type of horror.

Frankly, if you’re a fan of horror and a decent challenge, Lies Beneath is a great pick for your VR device. The game’s six to eight hour experience are full of wonderful twists and turns to satiate any horror fan. It’s quite a solid title even if its not always the most polished. Most of all, it’s just a bloody fun adventure. 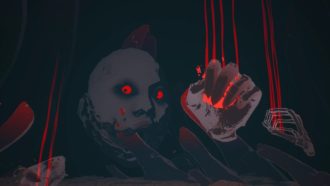 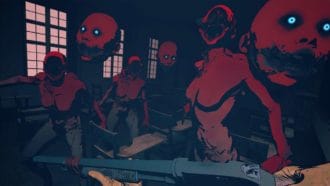 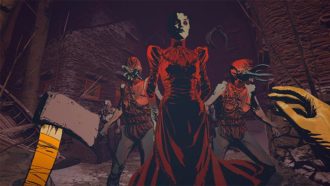 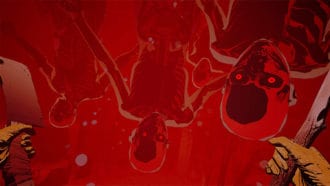 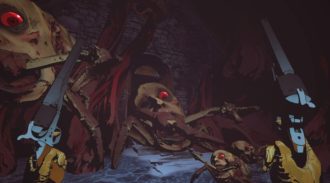 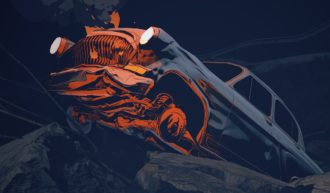 To be short, this is the most fun I’ve had in our VR Corner feature segment yet. Lies Beneath is suspenseful, unsettling and a downright blast to play. It may be limited to only the Oculus platform but if you have a device in that family and a spare near $50 to spend, it’s well worth jumping into.

Lies Beneath is available for Oculus Quest – check it out.