Virtual Reality is a chance to immerse yourself in a virtual world, often times transporting you somewhere totally unique, where you can lose yourself in another time and place. Acron: Attack of Squirrels instead takes advantage of the party game atmosphere that VR can sometimes provide, especially when showing it off to your friends. Instead of just watching your mates play Beat Saber, this pits one person in the headset against the other players in the room on their mobile phones in an asymmetric multiplayer battle that is fast, frantic and entertaining, and a great way to show the simple but effective nature of the technology to newcomers.

Compared to other titles, the premise of Acron is pretty simple. In asymmetric multiplayer style, one player (in the VR headest) takes on the role of a large, ancient tree that is the sole protector of some elusive golden acorns. Coming up against them is a team of one to eight squirrels, players who control the sneaky furry critters via their mobile devices, in an effort to steal them while using a variety of unique abilities.

As the tree, you have the ability to throw projectiles at the squirrels that are scurrying towards you, with simple grab and throw mechanics. There are boulders you can use to aim for a knockout blow, sticky balls of sap that can slow your opponents down and, amusingly, you can even pick up the squirrels themselves and hurl them across the map. On the flipside, the squirrel players on mobile have a variety of characters they can choose from, each with different abilities to help them snatch the acorn from the base of the tree and bring it back home to the drop point.

It’s all very silly and chaotic, but it works well. The app on mobile is a free download and rounds are quick to hop into and only last for a few minutes (until the timer runs down for a tree victory or until the squirrels acquire the amount of necessary acorns). It’s smart game design really; other multiplayer VR games require multiple headsets to be enjoyed, while others just have a “sit and watch” novelty to them. Being able to play with a room full of people instantly bumps Acron: Attack of Squirrels up the list of “must-have games” in your library as a completely fun and frivolous party game distraction that is simple to understand but provides hours of enjoyment, especially as the headset gets passed around for everyone to have a turn at being the tree.

As the tree, it’s easy enough to create an obstacle course on one of the various maps that makes traversal difficult. When it comes to the squirrels however, they all have different abilities that are each helpful in their own way to navigate your way to those precious acorns. Chunk has a large shield to flip up that deflects projectiles, also providing cover to other nearby friendlies. On the flipside, Zip moves very quickly, with an ability that gives them a speed boost that makes them very difficult to hit. Sim can build ramps to get out of harms way, Fortnite-style, while Doug stands out as a super effective choice, at least they did in our play sessions. Doug can burrow underground and create long tunnels that he and other squirrels can utilise to stay out of the line of fire. Combining these abilities and communicating effectively can make a real difference, so there’s definitely some strategy here for those who are looking for it.

Playing as the tree is incredibly satisfying, partly because it’s so simple in nature. Grabbing projectiles in front of you, aiming at the squirrels moving around the map and knocking them out feels satisfying no matter how many times you do it. Grabbing and throwing is one of the first actions you learn in VR (especially if you try out First Steps when you’re getting the hang of things in your Oculus Quest) but those actions make it incredibly easy to explain to newcomers. Grip the controller to grab, throw at the squirrel and let go. Easy! We all had a shot at being the tree and that was by far the most entertaining portion of Acron: Attack of Squirrels.

On the mobile side of things, controlling the squirrel can be a little bit tricky, using the directional buttons on screen, a jump/dive button, ability buttons all the while trying to survive and avoid the trees attacks. Still, with several squirrels all working together against one large opponent, it could be an intentional bit of balancing that the squirrel side of the game doesn’t feel incredibly responsive when it comes to character movements and abilities. The tree player certainly feels like they have an advantage at times, although we did find that it was a pretty even split after several play sessions when it came to tree victories versus squirrel victories.

The silly cartoon look and feel of the game means that colours pop off the screen in a way that makes squirrels easily identifiable as the tree, and ensures that visual fidelity remains decent on mobile as well. A bigger mobile screen definitely helps if you have the right phone, as the buttons and indicators do take up a little bit of real estate that can make it difficult to see. It’s all meant to be a bit goofy as well though, and experiencing the visual of your friend as a tree on your screen, complete with their mapped VR movements (and bad dance moves), means some funny shared moments. There are now a good variety of maps that look visually distinct from one another; while matches are short and it still won’t take a long time to “see everything”, the change of environment keeps things feeling fresh with new obstacles in the terrain to take into account on both sides. 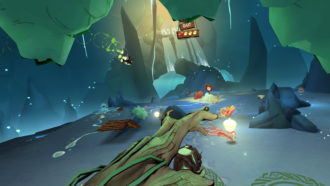 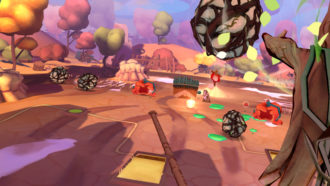 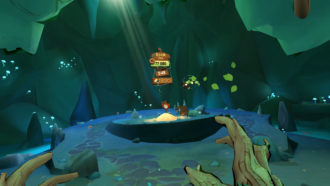 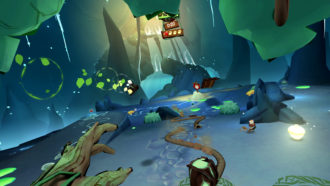 Virtual Reality as a concept has been growing over the years, but with so many of the experiences being either solo or “online multiplayer only” in nature, it can be a difficult prospect to show your friends – gamers and non-gamers alike – what makes the technology so special. That’s not a barrier here at all. Playing as a giant tree and throwing projectiles at your thieving squirrel pals might sound like a far out concept, but Acron: Attack of Squirrels makes for a hilariously good party game. I hope other developers follow suit with creative VR multiplayer ideas just like it.

Acron: Attack of Squirrels is available now on Oculus Quest – check it out here.