VR Corner – Until You Fall

We’ve covered some much-loved genres in VR Corner so far. Kart racing, multiplayer, fitness, cooking, horror and more. Roguelikes (and roguelites) have been growing in popularity over the last few years, with games like Hades, Spelunky 2 and more being considered some of the best experiences gaming has to offer. It’s therefore incredibly exciting to see a game like Until You Fall hit VR, an arcade inspired hack ‘n’ slash roguelite that will challenge your reflexes while making you work up a real sweat.

Until You Fall seems simple on the surface, much like its genre contemporaries. You’ll move through each area one after the other, killing enemies and being rewarded with an upgrade at the end of each stage before moving on to the next. Enemies get more difficult as you progress, until you fall (get it) and end up back at your hub to gear up and give it another crack.

We know the drill, but Until You Fall successfully translates this tried-and-true gameplay loop into a VR setting; you have the ability to hold a weapon in each hand (and they’re allowed to be different ones with different abilities), and you can use them to attack and block. You also have special powers you can activate and some enemies will require you to move your body to dodge their attacks. Each run also features randomised rewards, powerups, enemy configurations, and rooms, so no two runs are ever identical. It keeps you on your toes, that’s for sure.

What makes Until You Fall so great to play is how satisfying combat feels. As I said before, you can hold two weapons at once and it’s up to you which one you want to use to attack or block with at any given time. Initially, I felt more comfortable getting into a rhythm with my dominant hand weapon, and this is likely where most people will start. After a few runs though, I began to experiment with my playstyle. Using one weapon to block and another to attack made sense for a while, but harder enemies change their attack patterns in such a way that this isn’t always a reliable option.

Eventually, I felt like a total badass, switching constantly between blocking and attacking with both hands, all the while moving my body out of the way when the on-screen indicators let me know that I’d have to dodge to survive. It’s worth noting that a bit of space is required to play Until You Fall so that you don’t risk wildly swinging outside the barriers of your play area, as it does get pretty intense moment-to-moment. Like the best roguelikes, it’s the combination of consistent upgrades and your own improving skill as a player that keeps you entranced with Until You Fall, often for hours at a time.

“Like the best roguelikes, it’s the combination of consistent upgrades and your own improving skill as a player that keeps you entranced with Until You Fall, often for hours at a time.”

Gameplay mostly comes down to reflexes and timing, along with learning your foes and knowing when its wise to go on the offensive with fast attacks or take a more defensive approach, waiting for them to strike so that you can block and chip away at their guard meter. Eventually this will stun them, leaving them vulnerable to your attacks, a great opportunity to deliver a flurry of slashes. There are times when you’ll simply be outnumbered by enemies and the odds become insurmountable, with some projectile attacks really testing your timing, and every now and then the block input doesn’t line up perfectly like you think it does and you’ll cop a cheap hit, but mostly combat is slick and exciting, especially with another tantalising upgrade right around the corner.

The world itself is a neon fantasy come to life, with dungeons pulsing with vibes that wouldn’t be out of place at a futuristic cyberpunk nightclub. Bright green and purple environments are filled with faceless foes and the synthwave soundtrack absolutely keeps you pumped as you progress. While it might not be a music rhythm game, Until You Fall has such an awesome pulsing beat that you almost can’t help but bop your head and time your attacks alongside it.

While not strictly a fitness game, it often gets categorised as one, and after your first play session you’ll completely understand why. The dexterity, the varied movement of your arms blocking and attacking along with the times you have to move your whole body, all with a fast pace and pumping soundtrack… I mean, I’m a big guy so I sweat from walking down the hallway of my house, but this game made me feel like I had a proper cardio workout at the gym, which I believe is a place that workouts happen with real people. Genuinely, if you want to work on your fitness while playing an action game with progression, this is a fantastic option. 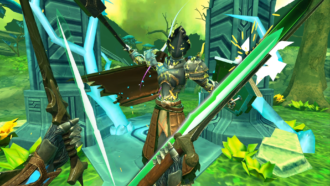 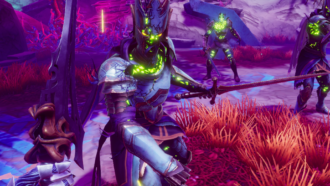 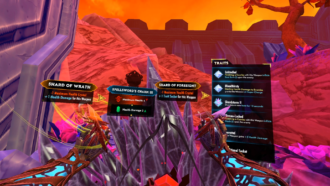 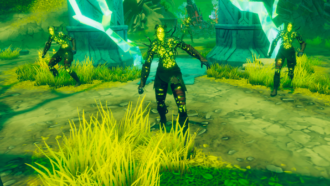 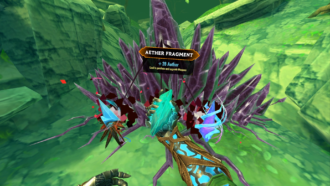 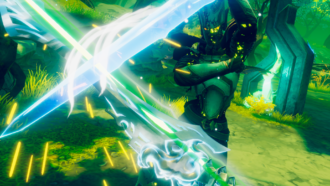 Not only is Until You Fall a fast-paced and thrilling VR experience, but it’s a very well-made roguelite and doubles as great way to incorporate fitness into your Oculus Quest line-up without having to specifically invest in a fitness game. It captures the “just one more run” formula while also providing you with some progression that ensures you never feel frustrated when you face defeat. Until You Fall is one of the best titles you can pick up on VR today.

Until You Fall is available for Oculus Quest – check it out.