If you’ve looked into VR at any point, you’ve probably heard of the zombie shooter Arizona Sunshine. Released originally on PC VR back in 2016, you could call it a trailblazer in a way, one of the first virtual reality experiences to have a story and feel more like a mere tech demo or shooting gallery. Arizona Sunshine has since launched on the Oculus Quest, bringing it to the popular wireless platform, and was also upgraded last year to better use the upgraded technology of the Oculus Quest 2. In 2021, Arizona Sunshine is still one of the more expensive games on the store, but also one of the consistently best-selling. So really, how does it hold up compared to the competition, five years after its original release? Step into the VR Corner with me, my zombie-slaying friend.

Arizona Sunshine has a very simple set-up; again, keeping in mind this was one of the first VR games to make an effort to tell a cohesive story, which is still something lots of VR developers struggle with, opting for more short-form entertainment instead. You play as a man who wakes up alone in a cave, and after hearing a radio signal, ventures out to find where it came from, hoping that there might be another actual human being on the other end. To make it there, you’ll need to explore a bunch of zombie-filled environments, mowing down hordes with the limited gear at your disposal and find out whether there’s any hope at the end – or whether you’ll end up alone still in the zombie apocalypse.

It’s familiar territory and a story that’s been told in the zombie genre time and time again, but the game is not designed as a nuanced take. This is a linear game, moving from one area to the next, killing the undead and moving on. There are roadblocks in terms of finding the odd key or lever to unlock the next stage, but essentially these are short missions designed to showcase the shooting itself. It can be played in full co-op with a friend, which is actually a fantastic addition that adds to the frantic nature of fighting off zombies, but otherwise, this is a “gameplay first” experience, story and style a very distant second.

With the shooting being the real hero and the focus of Arizona Sunshine, it’s great that it feels truly excellent and holds up very well today. Holding a gun in VR and popping off the perfect headshot, watching the skull pop and the corpse fall to the ground is immensely satisfying. Reloading is also a simple affair, simply press a button and quickly move the gun back to your stomach to fill your gun with bullets again. It might not be as realistic as other games with various weapons and reload mechanics, but honestly I don’t want to think about having to fumble around with unique movements when there’s a wave of zombies coming at me. This reload system still feels interactive without over-complicating matters.

There’s a variety of weapons to mess around with, too. You can equip two guns at once and store two on your person, and mix them up. The pistol will be your main friend initially, but it doesn’t take long to build up a decent bank of options, including a revolver, uzi, shotgun and even grenade launcher. You can also pick up grenades that can be used along with some other larger weapons that you get to interact with during certain missions, including a sniper. Lots of other parts of the world aren’t super interactable apart from a lever you pull or a switch to hit, but you can find various masks around the place to wear and show off to your co-op companion.

“Holding a gun in VR and popping off the perfect headshot, watching the skull pop and the corpse fall to the ground is immensely satisfying.”

There were some niggles I had when playing Arizona Sunshine that made the world sometimes difficult to interact with. Opening doors for example seemed to be a bit of trial and error, with many times them not opening far enough, or slamming back in my face. Sometimes you can’t see what’s on the other side of the door until you step through, which isn’t helpful when there’s a zombie on the other side. Aiming down sights with the sniper is also difficult, though I’ve read it’s much better than it used to be on launch. Overall the experience is pretty shot as well. While the horde mode does add a reason to go back and aim for high scores, the campaign only lasts around 3-4 hours, with replayable levels. It’s also missing the ability to melee, which would be helpful when in a corner (and, since this game came out, I’ve found the joys of stabbing a zombie in the head in Walking Dead: Saints & Sinners).

The voice acting of the main character is important in the sense that he’s the only voice you’ll hear throughout the experience (apart from the “grrrs” and “args” of the undead that you destroy. Unfortunately, he’s one of the most unlikable and annoying protagonists I’ve come across in recent memory. The dialogue is cheesy, and that’s probably the point, but it’s delivered with such awful gusto that it comes off sounding worse than intended. Giving the zombies names and making poor jokes and outdated pop culture references induced a lot of cringe in me and my zombie-killing buddy, so much so that we joked about turning the game off in protest. I’m all for campy interpretation of a bonkers script – it is zombies, after all – but this was just overwhelmingly bad and constant. 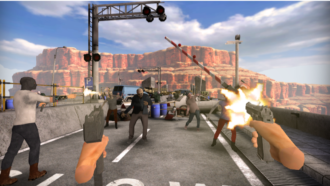 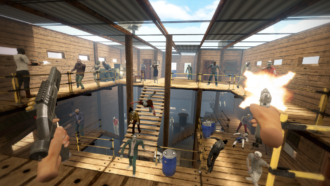 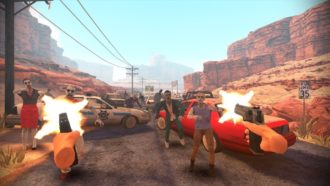 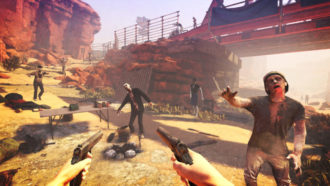 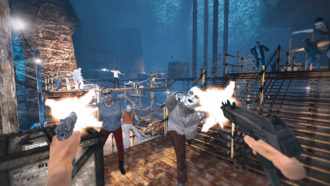 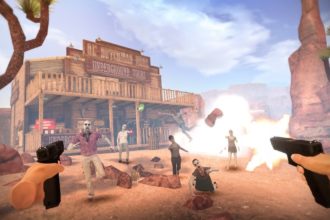 Visually, Arizona Sunshine looks okay, with improvements made for the Quest 2 platform when that launched late last year in terms of animations and the like, but overall it’s still a bland and fairly dated looking adventure. A level set in a tunnel system is particularly hard to navigate due to the lack of detail, textures are also lacking in visual fidelity and there is some pop-in too. This is not a “wow” showpiece for how wonderful VR can look, by any means. Zombies themselves at least look the part as they shamble towards you, and it’s fun gore seeing their limbs fly off as you shoot them to pieces, so there’s that.

Arizona Sunshine is one of the most successful VR games of all time, with good reason. There still aren’t many titles that are able to match with the super satisfying shooting and frantic action that comes with the zombie territory. Being able to play through the campaign cooperatively is a bonus, and the horde mode adds some more multiplayer fun for up to four players to add some extra longevity. Still, it’s a fairly dated feeling experience, with rough visuals and terrible voice acting that makes the game feel at times even older than its 2016 release date.

If you can look past these shortcomings, what you’ll find is a very enjoyable zombie shooter that benefits greatly from being built ground-up for the VR platform. Add in the Oculus Quest 2 with its fully wireless nature, and its easier to be immersed in destroying the undead than ever before.