Vanishing Grace is a VR experience that just released last week, with a focus on story-telling and some light puzzle-solving taking precedence over any seriously intense form of gameplay. To be clear, that’s certainly not a criticism. Some of my favourite video game experiences have been narrative-based adventures that transport me somewhere special, with likeable characters and an environment that sucks you in. Vanishing Grace is absolutely one of those experiences, and while some of its concepts could certainly do with some fleshing out, it’s a wonderful first step for a clearly talented small development team that I’m stoked to feature in this VR Corner.

Leaning more on the story-telling side of things, in Vanishing Grace you play as Joel, someone who has a wife at home who is pregnant with their first baby. However, rather than staying home with his family, Joel can’t help but be lured to search for his childhood friend Grace, after her hovercraft mysteriously returns to the Citadel, without her in it. Joel decides to take Grace’s ship and attempt to find her in the desolate wasteland, much to the disappointment of his wife Elena.

Designed as a short-but-sweet narrative adventure, the majority of your time in the game will be spent on Grace’s craft, listening to old tapes that have been left behind, investigating objects and piecing together the mystery of what happened to her. While taking in the fragments of dialogue and piecing them together, you’ll need to perform various maintenance tasks on the craft and collecting energy resources in order to keep it running. There will be the occasional pit-stop along the way, but essentially the majority of the experience takes place on the craft, which is well-realised with a lot of little details that make it feel genuinely lived-in, and a perfect location to spend your journey.

The craft itself in Vanishing Grace is quite cozy, with different objects that can be interacted with to further the story. It’s usually as simple as picking something up that is highlighted so that the next piece of dialogue can play out; in a more literal sense, after successfully completing a puzzle, a new tape will be discoverable that can be popped into the boombox to move from one chapter to the next. These checkpoints are a neat way to understand where a chapter begins and ends, with time spent in-between exploring the craft or just taking in the views as it soars through the wasteland, whether that be from the outer deck or just staring out the windscreen and watching the world go by.

While you spend time drinking in the story and getting to understand who Grace is and where she might have gone, you’ll have to keep the craft operational; a boomerang on the deck is used to collect energy from floating rocks, and is super satisfying to fling out before it flies back into your grip for another throw. I even spent time throwing the boomerang while listening to some of the audio, for those like me who tend to fidget while listening to something instead of just standing still. Occasionally, elements of the ship will malfunction, so you have to solve puzzles that lead you to plugging a leak or searching for a password on a locked toolbox. These brainteasers are enjoyable, though they are really “one and done” situations; the elements of each puzzle are never used more than once; it would have been cool to combine the different elements you’ve learned as you get deeper into the story, but as they work well enough just as they are.

“…time spent in-between exploring the craft or just taking in the views as it soars through the wasteland, watching the world go by…”

Some VR immersion is broken however in the sense that not every object is interactable, and some objects only can be used when they’re supposed to be. For example, in one early puzzle a screwdriver is required to make some repairs. Later in the game, that same screwdriver can’t even be picked up at all. Additionally, objects all return to their original place on the craft after ten seconds or so if you attempt to move them. While this could certainly be to prevent clues or puzzle elements to be lost completely or placed somewhere they don’t belong, it’s a little weird to move things around, throw them on the floor or place things in a separate area only for them to promptly teleport back.

It’s also a shame that some other areas weren’t created with the same fondness as Grace’s hovercraft. When stopping at a location, I was excited to “stretch my legs” and see what else awaited me, whether it be more puzzles or new narrative beats to unravel. Instead, each of these is just simply about collecting a few missing items scattered about, before you’re promptly ushered back onto the craft and moving on. Later in the game, this object collection is used to a slightly better effect, but these glimpses at the world outside are all too brief and only served as an incredibly small distraction rather than adding any real meaning to the story or characters.

Luckily, Grace’s craft is packed with a lot of detail that makes it feel like a genuinely real space as soon as you step inside. Photos and notes are scattered around the place, and a polaroid camera can be used to take quick snaps of your surroundings, just because. I spent probably a bit too much time just walking around, taking pictures and gleefully seeing them develop onto a polaroid in front of me. It even has a Gameboy on board that you can put a cartridge in and load up. It’s easy to lose time just hanging out in the space, which is a testament to how lovingly crafted it is. 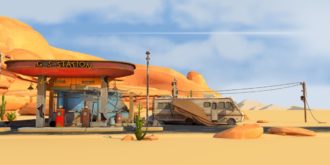 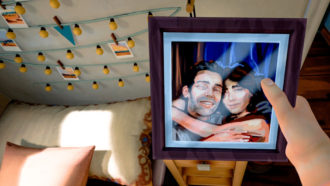 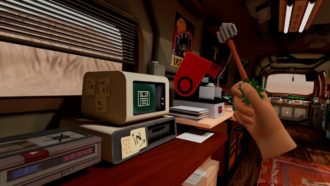 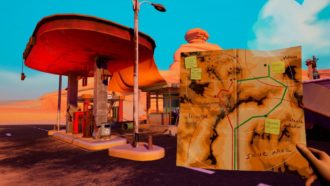 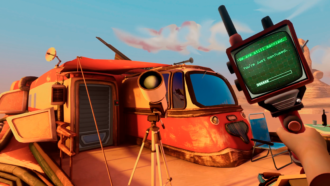 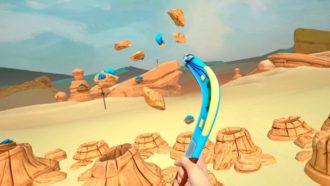 Joel’s interactions with his wife Elena back home are also, perhaps, a little infrequent. While it’s passed over as a “lack of reception” situation, some of the story beats could have used maybe one more conversation just to make sure they hit home. The story is short and sweet for sure, but some of the conversational choices you’re given to respond with could have had more weight to them if me as the player had a little more context and understanding of Vanishing Grace’s central characters. Even so, the voice acting from all three is top notch, and I felt myself instantly compelled to find out what was going on and what their relationships were all about.

Vanishing Grace is a somewhat brief journey, but one I’m glad to have taken. The team at Monte Perdido have done an excellent job of creating a comfortable, compelling space within the hovercraft that, for a while at least, felt like home. Grace in particular made for an intriguing character to get to know throughout, and while the pay-off could have used some more weight behind it to make it hit harder, it’s still a touching tale that values its story just as much as it values its various pieces of the gameplay puzzle, which I really appreciated. Learning from this, whatever the studio does next is certainly going to be worth keeping an eye on – but Vanishing Grace is absolutely worth checking out if you’re keen on a slower-paced narrative experience that can be enjoyed on a cozy afternoon.

Vanishing Grace is available for Oculus Quest – check it out.