Not many indie games can boast a staggering 5 million sales in just over a month of release. If we’re being honest, not many AAA games could either. Yet one survival game has managed to do just that, whilst seemingly coming out of nowhere.

Valheim is a Viking themed survival title that released onto Steam as an Early Access product back at the start of February. One month later and the game is undeniably the next big thing. Its success can’t be overstated, with the humble 5 man development team now looking to expand and upscale development.

But what exactly caused Valheim to blow up so extraordinarily? And is the game worthy of all that hype? We just had to find out for ourselves.

I had the opportunity to get stuck into Valheim alongside fellow Checkpointer Omi, and the two of us uncovered an expansive and intriguing world. At first, Valheim seems like a pretty traditional survival game. You boot up into a forest where you’ll need to hit trees, collect wood and other resources, craft rudimentary tools, and eventually construct yourself some shelter whilst avoiding or fighting any baddies who approach.

The opening moments of Valheim feel traditional and admittedly a little underwhelming. Why did this, a seemingly conventional survival game, reach a level of success unlike any other in recent memory? But the longer you play, the more you understand. Valheim is a surprisingly deep experience that streamlines many of the more egregious survival tropes and presents an exploratory and content-rich experience. For an Early Access game, the amount to do here is almost unbelievable. So let’s try to break it down.

Valheim’s primary gameplay loop involves crafting and exploring. This is a big game, and pretty quickly you can find yourself overwhelmed with options. The world is expansive and every biome is huge, meaning you can be exploring for hours before coming across a scenery change if you play methodically. It makes for a daunting and impressive experience, as though you’re a very small part of a much bigger world. It can also have the adverse effect of feeling a little samey and slow, as you trudge through the same forest ecosystem for the umpteenth time. Although playing with friends certainly helps to remedy any loneliness caused by such a large world.

A huge part of Valheim’s success is definitely its cooperative capabilities. The game is made for multiple players and there’s always so much to do that having people to collaborate with is just a no-brainer. One player can focus on gathering necessary materials, another can be building an impressive base of operations, another can be exploring the world and uncovering the game’s many secrets, whilst a fourth dicks around and ruins everybody else’s hard work. Sometimes you gotta be that wild card, baby!

The world is inhabited by many threats, and you’ll find yourself finding new ones the further you explore. Slaying foes and looting dungeons will be key to helping you progress through the game’s tiered crafting system. Basic wood and stone tools are useful but you’ll certainly want to build yourself some bows and arrows, hunt deer for leather, craft rudimentary armour, hunt trolls for troll leather, pillage dungeons, build smelting equipment and forge yourself better weaponry. The crafting loop is satisfying and reminiscent of other survival games. It’s a slow progression of constantly improving equipment allowing you to explore more dangerous areas and fight increasingly challenging foes. But whilst the game has its roots in the traditional survival game, it still finds a way to differentiate itself in some really great ways. 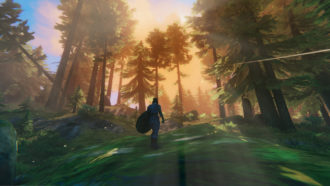 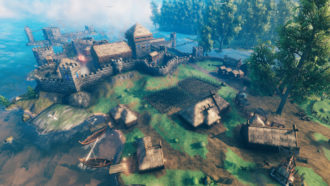 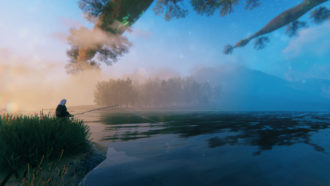 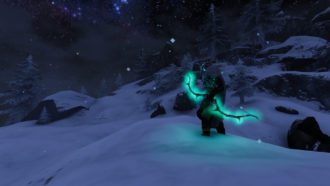 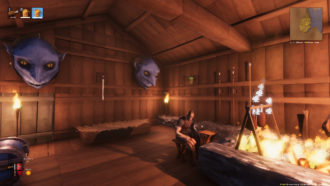 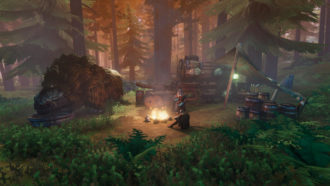 Valheim’s combat system isn’t the most advanced, but it’ll still put Minecraft’s flailing sword swings to shame. Here you have an attack and a block button that you’ll learn to utilise well. It’s important to get the timing right and to read your opponent’s attacks. A stamina bar will limit how quickly you can attack or retreat, adding to the strategy of combat. Similar to something like Dark Souls, stamina is everything. Jumping, running, sneaking, swimming, knocking down trees, and of course, attacking enemies all consume the initially tiny stamina gauge. Once you learn to attack smarter and not wildly, you’ll become an absolute Radningar in no time. Enemies can also find themselves staggered, leaving themselves open to some devastating blows. Skills level up passively. Every time you run, jump, swing your axe or really perform any other rudimentary task you’ll slowly be increasing your level which improves your ability with that skills. It’s very incremental but it feels good to be increasing in power by just playing the game.

Health and stamina can’t be permanently upgraded, per se, but can be temporarily improved. Food in Valheim works likewise to Monster Hunter. Consuming three different foods at a time will boost your health and stamina bars significantly, allowing Vikings to run further, swim longer, and take on stronger and more devastating foes. Bosses will also drop timed-buffs, like the first which reduces stamina consumption of running and jumping by 60 percent. It’s certainly a refreshing change to the usual eat to stay alive mechanic in survival games and one of the many reasons why it’s so popular right now.

Valheim also doesn’t punish you for basic repairs. I love this. You can literally walk up to your workbench and hit a button to immediately repair your damaged equipment for no resource cost. The same goes with structures, a quick swing of the hammer and the wall in front of you is instantly repaired. Food also feels quite abundant so you’re not struggling constantly with resource grind just to stay alive and healthy. In this way, the devs tapped into the aspect of survival games that players love, whilst avoiding those that feel like a burden.

“…the devs tapped into the aspects of survival games that players love, whilst avoiding those that feel like a burden.”

Valheim also has boss fights that you have to first find and then take down. These get increasingly harder, but give the player something to strive for. This is smart. It feels a bit like Terraria in the sense that there’s always a new boss you can build towards. It means there’s always an aim, something some players desperately need. Bosses imbue powerful buffs upon the player too, so they feel really satisfying to kill and give rewarding benefits. It also just feels good to take down a huge behemoth with your squad.

Valheim certainly isn’t a perfect game. I do for instance wish the world was more densely packed with new and interesting things rather than the quite repetitive environments that are currently on offer. I love that you can sail off and see more of this world but it was disappointing to finally reach a new shore only to find the exact same forest biome occupied by the exact same resources and threats. I know there’s more out there and even more biomes currently in development, so hopefully by the game’s full release we’ll see more variety!

I think the game’s art style will be a little divisive too. From a distance the game looks great, although up close things are really grimy. It may be a deliberate choice, but the rough and heavily pixelated visuals up close just do not appeal to me. What does appeal to me is that Valheim is filled to the brim with little secrets and player-driven stories. I don’t want to spoil too much for those who haven’t had the pleasure yet, but the game certainly has things to offer. And whether you go in solo or team up with a squad, there’ll be a lot of enjoyment to be had out of this Early Access survival release.