Boomerang X is a hyper-stylised, first-person arena shooter that will see players launching themselves around arenas as they take down foes with an x-shaped boomerang. The upcoming release is a debut for DANG! who’s working with Devolver Digital to bring their game to both PC and Switch this year. A sizeable demo allowed me to go hands-on with the title before I was able to probe two of DANG!’s five developers for more details on the title.

Ben is a 3D artist and involved with sound & music at DANG! and Sam does programming and technical art. The two said it best themselves when they described this game to me as “…a first-person boomeranger. It’s an arena shooter that takes a lot of inspiration from a game like Devil Daggers except instead of a gun or a shotgun or a machine gun, your primary weapon is a boomerang.”

The Devil Daggers reference is a smart one, and something I instantly noticed myself when playing through the game. Not necessarily because the two games are super similar, but they are both arena shooters that have an outlandish amount of style. Where Boomerang X differs however is in its focus on expansion and progression, whilst Devil Daggers thrives in its simplicity. It’s not too long into Boomerang X’s demo where you see that expansion and progression first-hand. You’re given abilities as you progress that allows you to do some really flashy moves such as throwing your boomerang and teleporting to its location or slowing down time to line up that perfect shot on an enemy’s weak spot.

The gameplay is genuinely really satisfying. You’re given a good amount of control with your boomerang although you certainly won’t be able to attack as frequently as you would in other arena shooters, instead needing to wait for your boomerang to return. This means every throw is more crucial. It also means you have a bit more time to focus on your movement as you hop around the arenas, looking for good positions and avoiding the enemies who constantly move towards you. Traversal here is king. As an old-school arena shooter player, I felt at home in Boomerang X as I darted my way around the arenas. Being able to teleport to your boomerang and even maintaining momentum through those teleports allows you to cover a huge amount of ground instantly and really adds to the quick traversal potential. Huge vertical arenas meant I had to rethink my playstyle as I started launching myself upwards to reach higher ground. Arena shooters have always been frenetic, but Boomerang X manages to take things to a whole new level.

In the game, you’ll progress from arena to arena by killing the highlighted enemies before getting slaughtered yourself. At first it’s a fairly easy task, but later arenas will get bigger and more threatening as new types of foes are introduced. These foes are faster, larger and more formidable. They can also be more challenging to kill as you have to hit one or multiple weak spots to bring them down.

I asked the devs about the inspiration behind these enemies and the style overall. They told me “It took a long time to get the style exactly the way that we wanted it. There’s tons of custom shader work in there. Getting Unity’s lighting engine… to do some crazy stuff it was not designed for… We in particular loved lots of the background art from Samurai Jack and wanted to see if we could develop our own sort of style that contained that lovely, splattery, grungey, stylishly shaped aesthetic.” 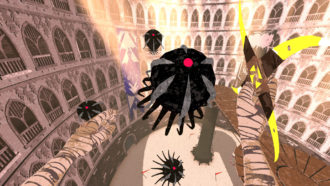 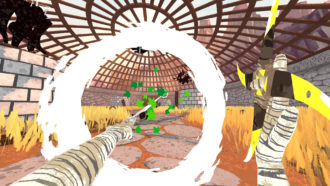 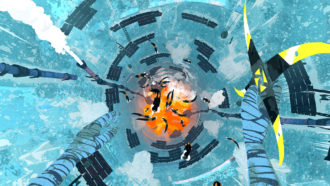 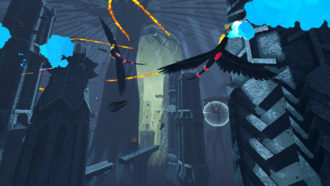 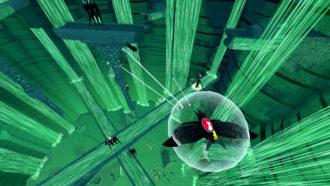 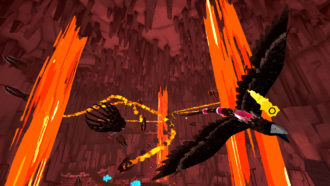 Whilst the game definitely looked and played the part, I couldn’t help but ask about the non-traditionally shaped boomerang featured within the game. I mean as an Australian, it’s almost a civic duty, right? The team told me that it all started back in the original game jam version of the game. “You want something that’s going to be more radially symmetric… I remember all those foamy, x-shaped boomerangs that were getting sold at Walmart so I based the original one on that. It looked exactly like a toy… and because the game jam version was called Boomerang X I think we were just locked into it being an x-shape from then on.”

I also wanted to ask about the game releasing on both PC and Switch. Arena shooters, due to their speed and need for accuracy, have traditionally been a very PC centric genre. I couldn’t help but wonder how the team plans to bring this type of game to Switch and if that system can even support a game like this. They explained:

“It wasn’t easy… I’m shocked at how playable it is on Switch actually. We had to put a lot of good auto-aim and being nice about how encounters work for someone who’s using a controller… and it made the PC version a lot better too. Being kinder about those things just makes the game feel better… I remember 9 months ago when the Switch was first brought up by Devolver, I was like ‘no’, you’re not going to be able to play this on Switch, I can’t imagine a world where you play this game on a Nintendo Switch. And then as time went on it became clear from Devovler’s point of view that this would be a huge boost to sales and observability, getting more eyeballs on it… and I was like ‘I guess we’ll figure it out’. It definitely was not easy, getting it to a playable place, but with all the features we’ve put in, changes to difficulty, changes to performance… it’s pretty playable on Switch.”

With a release window of summer in the northern hemisphere and winter down under, Boomerang X isn’t too far from release. I’m still sceptical about how well a game like that can run on a platform like the Switch, but it does sound like a whole lot of work has been put into that version to ensure the best possible outcome. I myself intend to continue playing on PC upon the game’s full release because there’s an undeniable thrill and fun that comes from darting around those arenas and a really good amount of style supporting the whole thing. With some added lore and a millipede friend named Tepan, I can certainly see this game winning over some fans.

For anybody who’s interested you can check out Boomerang X on Steam. In fact there’s even a demo currently running that you can jump into and I’d certainly recommend it! Boomerang X will come to PC and Switch this summer (winter for us here in Australia).