Entering into the booming social deception/deduction genre of video games is a recent Early Access title by the name of First Class Trouble. Designed to be played by 6 people, First Class Trouble sees players attempt to survive against an artificial intelligence aboard a luxurious intergalactic cruise ship.

With a bottle of champagne in hand, players will have to top up oxygen supplies, repair sabotages, and work together to shut down the ship’s menacing AI, all whilst battling against the unknown threat hidden amongst them. It’s social deception with an added layer of chaotic lunacy.

Of the 6 players in any given match are 2 Personoids whose job it is to kill and sabotage the innocent players whilst attempting to remain undetected. The Personoids can fix sabotages, refill oxygen, complete objectives and work alongside the Residents as a means of remaining undetected. Although when nobody is watching, the Personoids can also sabotage parts of the ship or even kill Residents who find themselves in precarious positions. As you complete tasks in the game, the Residents will get closer and closer to reaching the dastardly AI, at which point they can shut them down and win. Although you better hope there’s no Personoids remaining in the game once you reach this stage!

Any given match of First Class Trouble has multiple stages where you unlock access to a new part of the ship and progress. It’s in these transition periods where Residents are able to vote off someone from the ship, which locks them in an airlock and jettisons them into space. It’s actually pretty hilarious in a highly morbid kind of way. In these voting rounds, clues that players can uncover are also presented to the group and it’s a real opportunity for discussion and deduction as the crew attempts to figure out who the Personoids may be.

There’s obvious Among Us parallels that can be drawn in these moments, but where First Class Trouble really shines is in its ludicrous and slapstick interactivity aboard the ship. Oh boy, things can get wild. 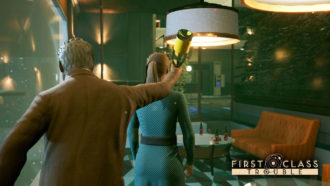 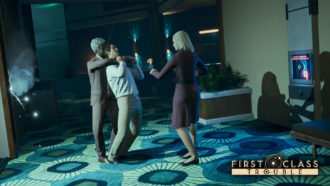 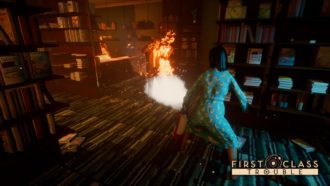 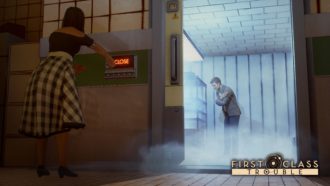 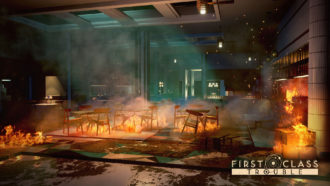 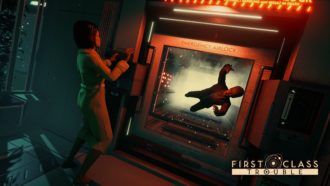 First Class Trouble really does embrace chaotic shenanigans and it’s all the better for it. Throwing a champagne bottle at another player’s head and watching them ragdoll onto the floor will never get old. You can push people into water or down into a void or even hold another player whilst a third player comes and snaps their neck. I know, it’s super morbid. But with a jaunty musical soundtrack and whimsical art style supporting the game, it all just ends up feeling hilarious instead.

Some sabotages can only be fixed and some locked doors can only be opened with cooperation between two Residents. It’s in these moments a Persoonoid can deliberately fail whilst hiding behind the veil of incompetence rather than malice. Moments like this remind me that there’s actually some pretty clever social deception at play, even when lunacy reigns supreme. I love the added touches around the cruise ship like getting drunk on champagne or dancing in front of a jukebox. It’s here where you realise that the game actually pretty brilliantly manages to toe the line between silly and strategic.

As an Early Access product, First Class Trouble is an impressive package. I’m not yet willing to say it’s better than similar games, like Among Us, but it no doubt brings something new and engaging to the genre. With a full match of 6 Checkpointers all playing over voice chat, I can tell you we had a ludicrous amount of fun. With future updates promising more levels, traps and events, I can see us sticking with the game for many months to come.

If I were to lodge any criticism over the current state of First Class Trouble it would be with the in-game voice chat. I love the idea of proximity chat as a strategic tool, but all too often we found the in-game voice audio was not very pleasant to listen to. It would peak and distort and just sound quite rough overall. We opted to play over Discord instead and mute our in-game mics. Although the detractor here was that without proximity chat, Personoids were at a bit of a disadvantage, not able to take out an isolated player without the entire lobby hearing the cries for help.

Despite any flaws, First Class Trouble is a surprising amount of fun. I’m often hesitant with Early Access titles like this, sometimes hitting storefronts before they really have the content or polish to justify it. Although I’m happy to say that this game does not suffer from this problem. If you’re interested in this genre of game, or you’re just looking for the next stupid cooperative romp with your friends, give First Class Trouble a proper look. I don’t think you’ll regret it.

You can find First Class Trouble on Steam as an Early Access product.