VR Corner – Carly and the Reaperman

I love a good co-op game, but as a genre overall, they’re a dime a dozen. We haven’t covered many in our VR Corner at all. While we get the occasional wonder like the recent console game It Takes Two, most of the time co-op features are simply a part of a larger game, rather than being the core focus. Carly and the Reaperman is a VR co-op platfomer, that makes great use of its core concept and manages to get a lot of mileage out of the mechanic of “working together”. It has been released on previous platforms before in 2018, with one player in VR and the other using a traditional controller. Now, on Oculus Quest, Carly and the Reaperman allows for two players to be in the headsets together while playing online. It makes for an entertaining and clever puzzle platformer that is hard to put down.

Certainly not a new idea, but one that hasn’t been tackled a lot on the platform when it comes to being a full release, Carly and the Reaperman features one player controlling Carly in the third person, moving her around platformer-style, while the other player acts as the Reaperman, overseeing the levels from a God-like perspective and able to interact with puzzles in the environment. What starts off relatively simple, moving blocks, triggering switches and the like, quickly escalates to challenging areas where Carly must sprint through a series of obstacles quickly while Reaperman is frantically stacking blocks and triggering other elements so that she can get to safety.

The escalating difficulty of each level is smart, taking cues from other clever puzzle platformers where the early sections teach you what you’ve got to do, before ramping up and putting those skills to the test. There is a story of the duo finding lost spirits in each area, and the Reaperman then allowing them to pass over from the spirit realm, but it’s mostly just vaguely tying together each puzzle area. It’s cute enough, as you see the photos of the ghosts from before they died. Mostly, this is about working together with a pal to solve puzzles.

Really, the main component that utilises VR to the fullest is when you play as Reaperman. Like other puzzle platformers we’ve seen in the past, playing from a gigantic perspective that towers over levels while you move blocks and create paths is very satisfying. The camera angle can be changed frequently so that you can get a different perspective, which plays into some visual puzzles throughout too, where your point of view can be super relevant. Your block-building skills will certainly be tested at times, and I’ve always been crap at building things, so that meant a bit of downtime for my player 2 as they watched and waited for me to stuff around with building a feasible structure for them to climb.

“There’s a surprising amount of variety in Carly and the Reaperman… there’s plenty to do if you’re looking for it.”

As Carly, it’s more of a traditional platformer in the ways she moves around the level, largely relying on access created by the other player. That doesn’t mean Carly doesn’t have anything to do though. You’ll need to flip switches, pull levers, nail some tricky platforming sections and, of course, two sets of eyes are always better than one when trying to figure out a solution to a problem. Platforming as Carly mostly feels good, although it can be a little imprecise at times; thankfully, checkpoints are relatively frequent so falling to your death doesn’t mean a large amount of repetition, although my Carly experienced this more than others might. With so many of the blocks floating tenuously, missing a jump can be quite common. Sometimes the camera view can be blocked or obscured too, forcing you to have to readjust on the fly, which can be annoying.

There’s a surprising amount of variety in Carly and the Reaperman too. Some levels are completely pitch black, so Reaperman has to illuminate the pathways with a giant torch. Some blocks disappear and can only be activated when Reaperman touches them. One area has lasers that will kill Carly if she goes near them, so they must be blocked. Some levels have visual elements that only one of the two players can see, meaning they must communicate to guide each other. There are also hidden challenges and collectibles to be found in each area, like you’d hope from a puzzle platformer. The adventure never feels too drawn out, but there’s plenty to do if you’re looking for it.

Our one frustration was that audio sometimes cuts out in the in-game chat, meaning we had to reset the game and then find each other again so that we could communicate. While some puzzles are okay to do with just a visual cue (we worked out a system of jump once for yes, twice for no), some puzzles require specific voice communication, so made us feel a powerless when this was lost.

For what it’s worth, the Carly player is able to also play the game via PC instead if that’s preferred to both being in a VR headset, but I didn’t test this out, opting for the full virtual reality experience on both sides, which felt more like we were working together towards a common goal. 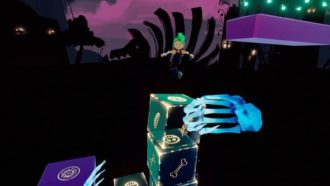 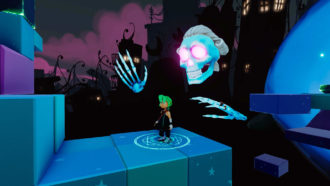 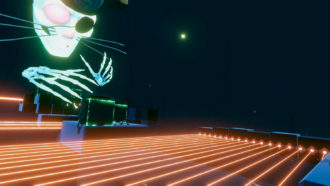 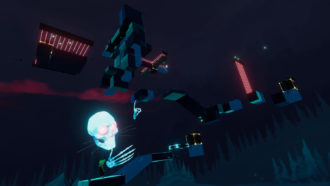 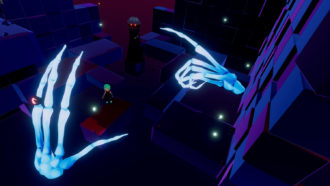 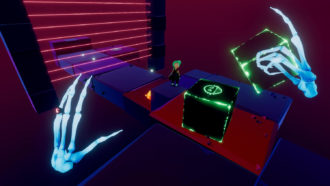 As stated earlier, there is some variety in Carly and the Reaperman that translates over to the visuals as well. Levels are all floating which makes navigating around them, looking over and under them and changing perspectives simple. There isn’t much visual clutter, so that you can focus in on what you’re doing. It’s also laid out in a way that usually makes sense, with clear visual indicators so you know which sections are safe and which ones are to be avoided. Some neat touches include a mirror where Carly can change the outfit Reaperman is wearing, which gave us a bit of a giggle, and on the Oculus Quest 2 we found it ran well with smooth framerates and easy-to-digest controls.

As far as co-op puzzle platformers go, Carly and the Reaperman is a joy to experience and feels very collaborative throughout. No matter which of the two titular characters you play as, you’ll need to communicate constantly and find solutions to tricky problems, with difficulty ramping up during the later stages once you’ve found your footing. VR provides so many tantalising opportunities for cooperative play like this, it’s surprising there hasn’t been more of it. Carly and the Reaperman is a wonderful example in using the VR platform cleverly and creatively to make an experience that is simply delightful and satisfying to share with a friend.

Carly and the Reaperman is available now for Oculus Quest – check it out.