Many sports are now available in VR, whether it be golf, table tennis or many others. We’ve seen bowling before, and its inclusion and popularity does make a lot of sense; look no further than the bowling portion of Wii Sports in terms of popularity and simplicity in terms of pick up and play. Enter ForeVR Bowl, designed as an incredible bowling simulator with a cutting edge game engine and Real Feel Throw technology. So is is a strike or a gutter ball? Stay in your lane because this is going to be a bumpy ride full of bowling puns in this VR Corner!

Actually, I think I used up the good ones I had…

Bringing the bowling alley into your home is the main goal of ForeVR Bowl, allowing you to easily connect up with friends to knock down some pins. There’s not much more to it really, as the game keeps things relatively simple, which is as it should be. It’s worth noting that this is in no way a simulator of bowling, rather an approach that’s focused on fun first, with cute cartoon-like avatars, a variety of balls filled with special effects and some zany environments to boot. Put simply, this is bowling, as you’d expect; Wii Sports introduced the idea of bowling in a party setting and as such, ForeVR Bowl absolutely captures that vibe, although bowling doesn’t translate to VR as successfully as other sports.

See, the main thing that makes bowling feel like bowling isn’t so much the action itself of swinging your arm, but the weight of the ball that you’re holding. Different weights can allow you to apply different levels of spin for example, and while that is represented in-game by each ball having different stats attached to it, it naturally isn’t able to replicate the feeling of holding an actual bowling ball. This means that the action of bowling is quite floaty by comparison, where you have to swing your arm and pretend that you’re holding something heavy – which never quite feels right.

“…the game of bowling is well represented here, and with the colourful twist it is absolutely still a blast to play.”

To be clear, this is no fault of the developers; the game of bowling is well represented here, and with the colourful twist it is absolutely still a blast to play. We enjoyed many back-to-back rounds, racking up strikes, having a laugh and being a little competitive while we enjoyed the 90s soundtrack (now, you can actually choose to play whatever you want from YouTube while you bowl, which is a nice touch). But the gameplay itself becomes less about bowling, and more like finding a rhythm that works or you in an arcade sense; learning which angle works best and “gaming” the system.

This does mean that your technique takes a while to figure out; some bowls, I would land a perfect strike down the middle, then I’d do what felt like the exact same method and end up with a terrible gutter ball. That being said, the developers were aware of this vibe and patched ForeVR Bowl with “Throw 2.0”, which has mitigated some of this frustration. It’s not perfect still, but I would say it’s definitely improved from what it was. Ultimately, if you’re able to look past this and see the game as a video game version of bowling, without the realism that other games like Walkabout Mini Golf and Eleven Table Tennis have really nailed, there’s still a lot of fun to be had.

It’s also worth keeping in mind that you’ll need a bit of space to play; the action of bowling with a little run-up and then swinging your arm in the appropriate motion doesn’t suit small rooms. I’m a big dude, and I often swung my arm back too far and too vigorously, hitting the wall behind me; also, again, because you don’t have the weight of an actual bowling ball in your hand, it’s even easier for an enthusiastic swing to get out of hand. 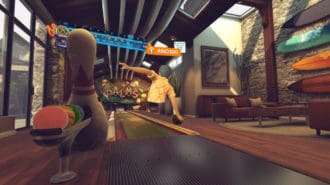 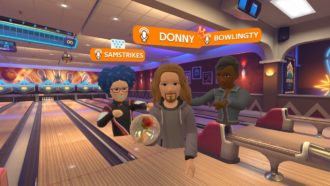 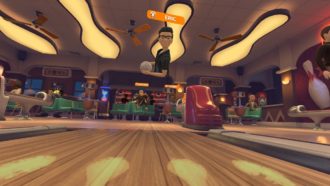 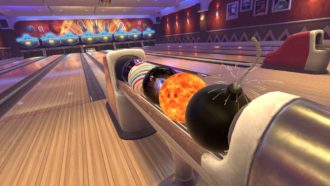 ForeVR bowl has a lot of charm and character; one alley is literally up in space while another is set in Atlantis, and there are over 100 designs of different balls that you can unlock. The recent update has made acquiring those balls less of a grind, which is nice, as some of them really do look awesome with lots of great visual effects. It’s also just nice to be able to walk around the environments themselves; there’s other bowlers (albeit they look a bit floaty with repeated animations), you can see the leader boards, check out the food and drink menu at the bar, take a seat with some other onlookers for a different perspective. I found it weirdly fun, when it wasn’t my turn, just finding a different spot to observe my friends bowl and pretend I was at an actual alley. Nothing is interactable, but the devs have really nailed the vibe.

If you’re looking for a fun, party-based representation of bowling that’s a blast to play with friends, ForeVR Bowl has you covered. The game of bowling itself might not be ready for VR like other sports are, but if you go into the experience looking for an arcade game rather than full-on realism, there’s something quite charming about hitting the alley in some crazy colourful environments and knocking down pins. As an enjoyable distraction, ForeVR Bowl absolutely succeeds.

ForeVR Bowl is available now for Oculus Quest – check it out.