Elder Scrolls Online is the ultimate MMORPG for me, a filthy casual

MMORPG’s have a bit of a history in terms of their perception; the idea that players need to spend hundreds upon hundreds of hours just to make a tiny dent in their gigantic worlds of complicated systems, gigantic maps full of quests and raids that require you to be a specific level with a specific class and specific friends to play with. It’s a daunting prospect, and while teenage-me found the time to take part in games like World of Warcraft and Lord of the Rings Online like a solid MMORPG no-lifer should, I’m now a grown-ass adult with a full time job, a serious relationship, family and friend commitments…. oh and I also keep the lights on here at Checkpoint.

For those reasons and more, MMORPG’s just aren’t for me anymore. At least, not the traditional style of MMORPG.

Elder Scrolls Online has, over the years, continued to build on its strong foundation of lore and storytelling with a number of large expansions that have not only fleshed out the universe for long-time fans, but gone back to locations and characters from previous popular Elder Scrolls iterations, like Morrowind, Skyrim and most recently, Oblivion. Recently, they released the Elder Scrolls Online: Console Enhanced edition, a hefty update that breathes new life into the game for those of us playing on PS5 or Xbox Series X. And now, Elder Scrolls Online is easier to recommend than ever.

I won’t spend time going into detail on the recent Blackwood expansion, as that’s not really what this is about – although that did give me a good reason to once again jump back in and check out the new bells and whistles on the Console Enhanced edition. A free upgrade for all players (as it should be, other “upgraded games” take note), the list of improvements is absolutely worthwhile.

60 FPS when in performance mode improves on the previous cap of 30, with almost double the draw distance and high resolution textures, which matters more than you’d think as you’re riding your mount through a glorious world that’s aching for every nook and cranny to be explored. There are also a truckload of other enhancements that bring Elder Scrolls Online into line with other titles on the shiny new platforms, such as improved reflections (water looks legit amazing now) along with improved shadows and improved depth of field.

“…I don’t feel like I have to commit hundreds of hours of game time to see cool shit happen in front of me and take part in epic stories.”

But really, the one thing that occasionally annoyed me about long play sessions in Elder Scrolls Online has now been improved so significantly that the game feels brand new. That’s right, they’ve dramatically improved on the loading times.

It used to take a solid chunk of time just to load into the game in the first place, let alone the transitioning between areas, or even just moving inside shops or homes in each of the town. Apparently, they’ve been “reduced by at least half the time”, but anecdotally it feels like it’s even better than that. I used to make myself a mixed alcoholic beverage while it loaded me in – now I barely have time to open the fridge. And moving between areas? So fast. It’s actually a game-changer and the slickness alone makes the entire experience more efficient.

But what Elder Scrolls Online has truly nailed for me personally is that I don’t feel like I have to commit hundreds of hours of game time to see cool shit happen in front of me and take part in epic stories. Where other MMORPG’s feel like a massive time commitment just to stay relevant and up to date, ESO allows me to jump in whenever I have time, complete a couple of quests and truly feel like I’ve accomplished something. It’s also structured in a way that means I don’t have to play through a lot of crap to get to the good stuff (which is a complaint I hear often when it comes to other MMORPG’s). 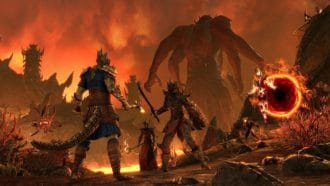 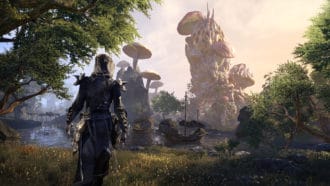 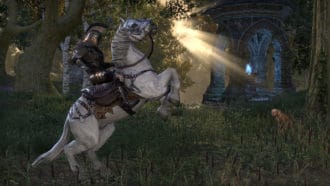 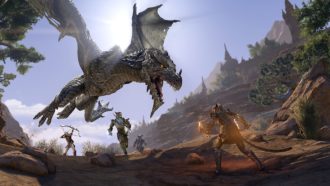 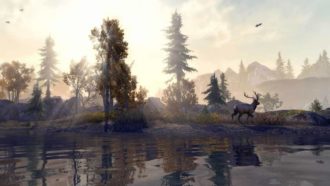 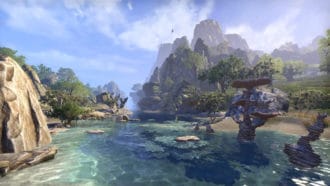 A big part of this is the level scaling, where much like the mainline Elder Scrolls series, the world levels up with you, and if you’re a different level to somebody else in your party, the challenge is appropriately balanced. So if I have a mate who wants to take me to meet an interesting character or to help them through a particularly tough boss, we can do so together without either of us feeling over or under-powered.

Plus, there are so many stories aching to be told in Tamriel across what is now several expansions (and more to come), and the support from the developers to ensure there is an active community with lots of content to play has been impressive to say the least. Want to go and explore a region that gives you memories of your original Morrowind adventures from 2002? Go for it. Eager to check out a brand new area with new threats and stories you have no idea about? That’s fine too. The possibilities do feel endless, but not in a daunting way.

That’s certainly not to say that the massive adventure doesn’t have enough content for more intense folk that have the time to dedicate hundreds or indeed thousands of hours to this universe. It’s a gigantic, exciting and epic world that could easily take over your life. There’s side quests galore, crafting of all kinds, guilds to join, secrets to uncover, loot to collect, dungeons to raid. It’s all there if you want it, and if I was somebody that could commit fully to one game for the rest of my life, this certainly would be an enticing option.

But I don’t play Elder Scrolls Online every day. I don’t even play it every week, really. But the best part about it is that I don’t feel penalised for not doing so. In fact, I feel empowered just to pick up where I left off, at my own pace, with friends or without friends, for 20 minutes or 2 hours, whenever I can. I’ve been playing this game on and off for literally years, and every time I dive back in, it feels welcoming and accessible. Zero pressure. And I appreciate that so much.

If you’ve been on the fence about getting stuck into an MMORPG and don’t know where to start, or feel like you may not have the time to properly get invested, give Elder Scrolls Online a go. I promise it’s worth it – even if you’re just a filthy MMORPG casual like me.