Visual novel Overboard! is as clever as it is villainous

Sometimes you get sick of being the good guy. Always upholding virtuous standards, obeying moral codes, thwarting the dastardly plans of the baddy. Boring. We all know that villains have more fun, a concept Overboard! embraces wholeheartedly as you attempt to get away with literal murder on the high seas.

Overboard! is a ‘reverse murder mystery’ from acclaimed visual novel developer Inkle, probably most well-known for their titles 80 Days and Heaven’s Vault. Unlike some of Inkle’s other work, however, Overboard! has a more focussed approach on a single concept which it is able to deliver on exquisitely. Sit back and enjoy the gentle lapping of the waves against the hull, because this cruise ship is on a course that even homicide can’t deter.

Overboard! opens up with our protagonist, Veronica Villensey, pushing her unfaithful husband over the rails of a cruise ship before waking up the next morning with a murder she now needs to cover up. The game is played against the clock with replayability not just recommended but basically mandatory. Your job will be to remove suspicion, plant evidence, threaten witnesses, and do whatever it takes to get away with murder. It’s not so much a whodunit, since we already know the answer to that question, but the same exciting investigative/mystery tropes are still present.

Overboard! is a visual novel puzzle game. You’ll play by making basic decisions about where you move around the ship, who you talk to, and what conversation paths you’ll pursue. The game is designed to be played over and over again with every new go revealing new information as you pursue different avenues. You may be busted by the end of one playthrough, but on the next, you’ll know what evidence needs covering up and which loose ends need tying.

“It’s an intelligent game, with a single throwaway line said to another character at the start of the game coming back to bite you at the very end.”

What makes Overboard! so good is the depth to which you can alter the course of the day. There’s so much hidden information and different paths that can be taken. It’s an intelligent game, with a single throwaway line said to another character at the start of the game coming back to bite you at the very end. Everything is logical (to an extent), and following these different paths and seeing what you’re able to achieve is absolutely thrilling. Sure, there’s the basic goal of getting away with murder. But I honestly achieved that super quickly, on I believe my second attempt. For me, the goals then became finding out what I missed on that successful attempt, and how many different ways you’re able to succeed. There are clues to help push you in certain directions and mini-goals you can set yourself, like how do I get the master key, or how do I get that old woman drunk? Every little interaction is like a mini-puzzle but one where you can’t instantly retry if you fail. You just have to move on and see how the rest of the day unfolds, retrying only when and if the opportunity ever arises in a subsequent playthrough.

The characters themselves are all quite likable, if a little villainous in their own right. Every character has nuance and honestly, a lot of them are rather despicable, so pinning the crime on an innocent person suddenly feels less horrendous. It’s here where the game’s writing really gets its time to shine. Even if I didn’t have a murder to get away with, I’d still be chatting to these different characters and hearing all the gossip. It’s all just so juicy. There’s a selfish aura running through the entire cruise ship, with every NPC, Veronica definitely included, really only being polite so they can get what they want later. Dig a little deeper or impact the circumstances and all of a sudden everybody’s dirty little secret starts to pour out. It’s a weird thing to say but I love the lack of humanity, especially in Veronica, who makes for an awesome sociopathic protagonist. 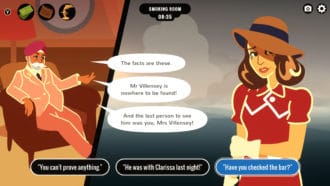 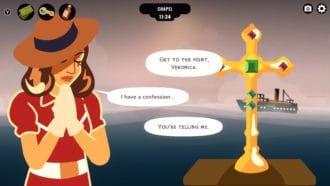 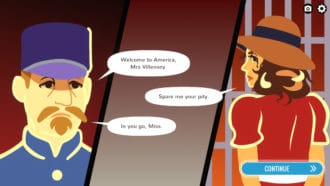 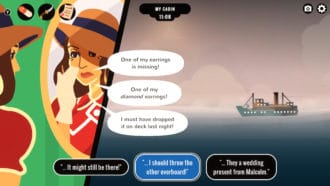 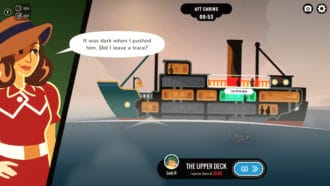 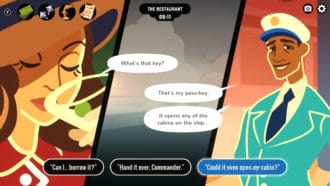 Overboard! is a game intended to be played over and over again. Because of this, there’s certainly a level of repetition to the dialogue that could be the game’s only detriment. Although even with that said, Overboard! intelligently gives the player tools to know which conversations paths they’ve gone down previously and allows you to fast-forward through some of these moments. The music, the stylistic choices, and so much more help showcase that Inkle know how to make a stellar game. For those looking for murder without the mystery, it’s hard to look past this nautical thriller.

Overboard! is available across PC, Switch, iOS and Android.