Back 4 Blood would easily be one of my most anticipated 2021 releases right now with the zombie shooter looking both gory and stunning every time we see it. Being developed by Turtle Rock Studios, the game also comes with a legacy as it tries to build upon the foundation of the iconic Left 4 Dead series. With this in mind, it was incredibly exciting to be able to jump into the game during a preview session alongside other members of the Checkpoint Gaming team to check things out for ourselves. A big thank you also has to go to Turtle Rock Co-Founder and Creative Director Phil Robb for helping answer our questions in a private interview.

Back 4 Blood first and foremost is a cooperative zombie shooter in the style of Left 4 Dead. The game follows closely to its inspiration with both a PvE “safe room rush” cooperative campaign as well as a PvP mode that lets you take control of the zombies, referred to here as “The Ridden”. For those unaware, Turtle Rock Studios were the original creators of Left 4 Dead before the team got picked up by Valve, so they’re not only experts within this genre, but they’re also the ideal studio to produce a spiritual successor. Studio Co-Founder Phil Robb was excited to share how the game both takes inspiration from Left 4 Dead, but also how it paves its own path with unique ideas.

Robb mentioned during our interview that Turtle Rock is hoping to create a new IP with Back 4 Blood, something they could continue into the future and truly make their own. He discussed how there were challenges in creating a game based on such an iconic legacy, and how some fans were adverse to any changes in direction Back 4 Blood was taking to help differentiate itself. For fans of Left 4 Dead, the game is similar but has some obvious differences. When we jumped into a PvP match, for instance, I was taken aback by the change of style. Back 4 Blood implements a more stripped back version of Left 4 Dead’s PvP mode, where players (referred to as Cleaners) defend a small zone whilst The Ridden attacked. Sides would swap between rounds with Cleaners becoming Ridden and vice versa. Rounds would end as soon as the Cleaners were all incapacitated or as soon as one team of Cleaners outlasted the previous team’s time.

“…Turtle Rock is hoping to create a new IP with Back 4 Blood, something they could continue into the future…”

I asked Robb about the change to PvP mode and he admitted that some fans had vocalised disappointment in this specific substitution. He also mentioned that Turtle Rock had new ideas and that they couldn’t be railroaded into following stringent concepts from the past, stating specifically that there were issues with Left 4 Dead’s PvP mode that the team wanted to address. Specifically, Robb mentioned how a PvP mode in Left 4 Dead could take a very long time, which would lead to people leaving sessions before they were finished and dampening the experience for other players. I have to admit, I respect Robb’s answer here and the philosophy behind the change. However, this specific change didn’t feel good to me as a player, with the new PvP mode feeling disappointingly generic and soulless compared to what is still on offer in Left 4 Dead 2. Admittedly though, our time with Back 4 Blood’s PvP mode was limited, with more playtime potentially helping to unlock this game mode’s potential.

Back 4 Blood’s standard campaign mode thankfully felt a lot better. Whilst PvE still had its fair share of unique ideas, those new mechanics all helped to further amplify the concept’s strengths and give players more choice to support their playstyle and preferences. Players will venture out as a 4-person squad with a whole bunch of eclectic and fun characters to pick between. They’ll have to work cooperatively to fight off the zombie horde including more threatening Ridden with special characteristics and attacks as they make their way from one safe room to the next with multiple chapters per campaign. It all felt warmly familiar and correct immediately, helped by the fact that the game looks and plays really good.

Where Back 4 Blood brings in its own ideas often revolve around customisation. Cards are selected at the start of a chapter that give perks to the players. These cards are unlocked as you play, with a deckbuilding aspect allowing players to create a deck of their favourite perks. These perks then synergize with the different weapon types and weapon attachments that can be found and purchased within a campaign. Back 4 Blood makes it really effective to spec into certain builds and facilitates a wide range of playstyles. At first these elements felt a little unnecessary, but once I actually got time to mess around with them, it all worked quite intuitively. Ammunition is limited and also specific to weapon types, so Cleaners will want to diversify their weaponry as much as possible, or else they’ll find themselves with an abundance of certain ammo and none of another. I liked seeing this as it encourages cooperation between a squad, although it’ll be interesting to see how frustrating this may get as you randomly matchmake into online lobbies. 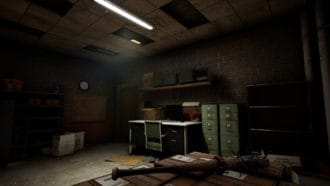 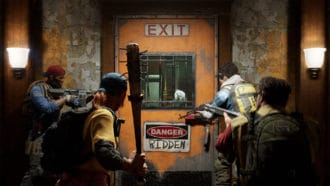 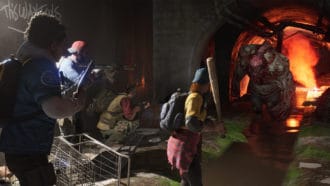 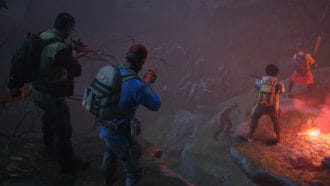 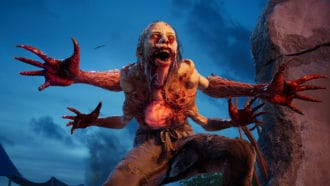 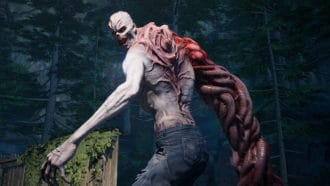 Back 4 Blood’s biggest challenge will always be the comparisons players draw to Left 4 Dead. Whilst the campaign felt good to play and it was super exciting to be back in another one of these types of games, I couldn’t help but feel it wasn’t quite ready yet as I was shooting through hordes of Ridden. At this point, I would be remiss if I didn’t point out that Back 4 Blood still has a couple of months worth of development ahead of its October 12th release, so things are still likely to change and improve. Although with that said, the preview build that we got a chance to play highlighted some pacing, difficulty and Ridden spawning issues that are hopefully ironed out ahead of its release.

During our preview, Back 4 Blood had an uncanny ability to end its chapters on an anticlimax. In one campaign, our team was fighting Ridden on a bridge with huge swarms of zombies and special infected continuing to stampede toward us. It was a moment of intensity unmatched by anything that came before it, with the vast quantity of special infected feeling strangely unfair in this moment. Getting over this bridge and onto a ship, we were tasked with collecting and arming explosives before we sprinted off the ship to a safe distance where we could watch as it exploded, taking down the Ridden onboard. This sequence of events sounds fantastic in concept, but the actual execution was just strangely mundane. Once we got past that devastating moment on the bridge, the final rush to plant explosives and escape was bizarrely easy and uninterrupted. Once again a chapter felt like it was ending on an anticlimax as we watched the boat explode with barely any Ridden insight. I don’t even know why we had to blow the thing up, we could have casually just walked away without a threat.

This moment and a few too many others showcased where Back 4 Blood still had room for improvement. The game lacked quite a bit of challenge playing on regular (medium) difficulty, except for that one aforementioned moment on the bridge that was suddenly incredibly devastating. The game also had a knack of spawning Ridden in front of you and not behind, making the path to victory strangely linear. My history with Left 4 Dead taught me to always check my 6, but it was a learned skill that really didn’t benefit me whatsoever within the Back 4 Blood preview. There would also be large sections of gameplay where we didn’t see a single special infected spawn. Once you clear an area of zombies, the game just kind of stops playing and waits for you to move to the next area without spawning any additional threats. Once again it just hurt the game’s pacing and it meant stragglers who fell behind in the Cleaner team weren’t being punished for not sticking with their team.

“Back 4 Blood’s biggest challenge will always be the comparisons players draw to Left 4 Dead.”

I don’t want to sound too down on Back 4 Blood, because the game has some undeniable positive points worth celebrating. Primarily I just love that there’s another game within this niche that’s doing so much right. I love that characters are drenched in blood and guts as they progress through the campaign. I love the characters on offer and the way you’re able to customise the game with perks and attachments to suit your style. I like that it has new ideas for the genre without messing up the formula that made Left 4 Dead great. I also love how the game feels, sounds and looks. Although I do hope to see some of the rough edges smoothed in the months ahead of release.

Back 4 Blood is due to release October 12, 2021 to PC, PS4, PS5, Xbox One and Xbox Series X|S. A big thank you to Koch Media for organising our preview and facilitating our interview, as well as Phil Robb for taking the time out of his day to answer our questions. We can’t wait to see more of Back 4 Blood as it nears its exciting release.