Drop, flop and flounder in I Am Fish!

Welcome dear reader to what I can only describe as an EXPERIENCE. Today I present to you I Am Fish, a physics-based platform adventure where you play as four different fish, frantically trying to navigate their way back into the open ocean through a wacky set of circumstances. You’re either going to find I Am Fish endearingly hilarious, or you’ll find yourself in search of a new controller after flinging it against the wall in utter frustration. It’s adorable, infuriating, and the reason why I may never look at a mason jar the same way ever again.

Before I go too… deep (yes, there will be puns), take a look at the trailer so you can sea some of the action for yourself:

I Am Fish, where mutant bread grants sentience. Yes, really.

I Am Fish, from developer Bossa Studios, is the sequel to I Am Bread. Now, if that name sounds familiar to you, it may be because several years ago a number of YouTubers were playing it whilst simultaneously losing months off their lifespans from self-inflicted abuse of one’s vocal cords. If that sentence alone hasn’t gotten you to run for the hills, then please let me reassure you that this soggy outing is much more manageable. Mostly.

Anyone familiar with similarly-minded titles like S(t)urgeon Simulator will know that typically a lot of the difficulty of these games comes from the control scheme; you’ll THEORETICALLY have plenty of control, but it’s so deliberately convoluted that it ends up leading to countless incidents of careening off-course because your fingers haven’t had enough practice playing miniature Twister. I’m very happy to report that in I Am Fish, the ridiculous controls are entirely optional! You COULD use the right stick to flip your fins… or you could play in a more conventional way and not like an absolute masochist. Elitists may complain about the change, but I say it’s a win for accessibility, AND considering my lack of experience with these sorts of games, it was a welcome option.

Now, in theory, there isn’t too much to master here. You can swim around in water and survive outside of it for short periods. On the surface of it, you’d think that’d be about it. But then you get introduced to all of the things that water can go IN.

You thought the game was just gonna let you swim about? NOPE! These fish need to earn their freedom through complex physics-based platforming, and it’s up to you to manipulate the various containers they find themselves trapped in on their journey to the ocean. Fishbowls, guttering, mason jars… if it can hold water, it’s a means of traversal, and you’ll need to learn how to guide them with your little fish body without shattering whatever happens to be keeping you alive.

There are a few, fleeting moments where you can swim with some impunity, but for the most part (at least in the first campaign), your goal is getting from A to B in your confines without the environment or the physics kicking your bass. I know that this must sound like a chore, but it’s surprisingly fun when things are moving in your favour. An acquired taste you could say, based on how patient you can be with a game like this.

The first few levels you’ll be playing as the goldfish, who is the most straightforward of the four available fish, and in retrospect, helps to introduce you to the physics before bringing in the more advanced mechanics of the other fish. I found this to be a bit of a double-edged sword honestly; this campaign does function well as a tutorial for the most part, barring some sections which I felt dragged on for too long, but they also make the goldfish feel sort of boring in comparison.

It isn’t that the goldfish itself is bad, but because it has no specific mechanic to break up the physics sections, those end up overstaying their welcome a bit in certain areas. In a game where each portion of a level is designed to be bite-sized enough where the checkpoints can easily be spotted beside one another, AND there’s a respawn command mapped to a face button, letting tedium set in is a major no-no.

If it can hold water, it’s a means of traversal, and you’ll need to learn how to guide them with your little fish body”

Upon beating the goldfish campaign, we unlock the other 3 little swimmers, and I think this is probably where the game is at its strongest. Every fish from this point has a new ability to spice things up, which helps a great deal in diversifying the gameplay of I Am Fish from this point on.

A fantastic example is the piranha. Their first level actually features some puzzles in which you swim around a house systematically flooding it more and more by biting into and destroying different pipes. You’ll need to swim into cupboard doors and push them open, dive into the water and jump out like Free Willy to snag handles, all so you can ruin someone’s home enough to get to a high window. It’s hilarious, and a really fun moment without any bowls or jars to contend with.

This is balanced out with a teeth-grinding scene later where you must guide another mason jar across rooftops whilst being swooped at by seagulls who can shatter it… I Am Fish both giveth and taketh away, I suppose.

But what tides it all together?

The game does have its frustrating moments that may have stopped me from continuing had I been in a worse mood, but honestly, I was equally compelled by just how charming the world of the game is.

It has to be said, while this isn’t exactly Pixar-tier, I Am Fish has some truly lovely visuals, and the choice to tell the majority of its story purely through body language was extremely effective. I continued to play because I was rooting for the fish to make it; to see one another again and escape to the ocean for good. 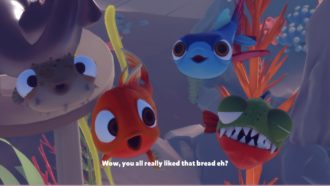 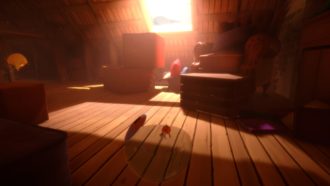 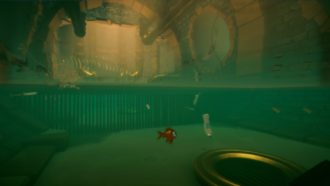 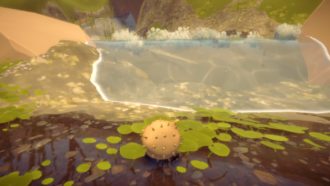 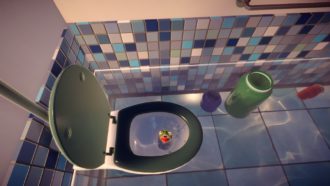 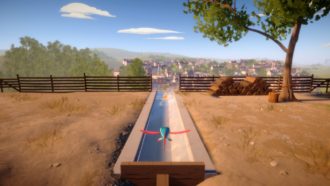 Once you’ve gotten outside in the first level, you can take a look at your surroundings… and it’s picturesque. It’s the sort of place you’d drive hours to just for a chance to take photos and try a local café. This compliment extends to the water too, as well it should. The first level for the flying fish features a sunset that was casting rays of sunlight into the river I had to traverse. I know graphics don’t singularly make a game good, but these deserve to be seen. I like to call it… filet tracing.

Games like I Am Fish aren’t really made for people like me. While I came to appreciate the title and what it was going for, I’m not someone who truly enjoys the mindset that birthed gameplay like this. I can laugh alongside YouTubers who are losing their minds over games like Octodad or Bennett Foddy, but I’ve never wanted to actually play them myself. And, truthfully, if it wasn’t for a little encouragement, I would have likely never touched this title either.

Regardless, I am Fish is certainly one release worthy of being noticed by those who love these sorts of games. Now it’s up to you to see if it’s worth diving for.

Oh and seriously, those mason jar sections can bite me.

I Am Fish is available now on Steam, Xbox One and Xbox Series X|S.