It’s been 25 years since the original Resident Evil was released. Naturally, there’s been a number of games inspired by the original magic this horror entry created over the years. Tormented Souls is the latest example of this, boasting heavy survival elements. After rolling credits, it’s clear it does well in recapturing a majority of those early quirks, even if the price of admission includes all the not-so-good stuff as well.

We’ve been here before, but that’s okay

Tormented Souls throws players into the role of Caroline Walker, an individual that receives a mysterious photo of twins in the post. Her search to find both the sender and the subject of the photos takes her to an eerie mansion. Stop me if you’ve heard this one before. Getting knocked out from who knows what, Caroline awakens naked in a bathtub, missing an eye. With awful monstrosities in the hall right outside, it’s up to her and her alone to find out what’s going and make it out alive.

I’ll set expectations right away – don’t expect a very momentous or memorable horror story. As you make your way through the mansion, slowly uncovering the horrors within, I couldn’t help but feel I’ve played this story through before. Many times. Perhaps that’s another thing in Tormented Souls’ favour – even the story is eerily reminiscent of early horror games. The enemies you’ll face across the mansion’s halls, dingy attics and basements are but mutilated human experiments, largely with the torso up being all that remains. Not quite the typical zombies but far from reinventing the wheel. This too rings true for the narrative. I may have made my way through the game’s duration at least once, but I could not muster the motivation to explore the alternate endings on offer.

Unfortunately, the characters and voice performances do leave plenty to be desired. A majority of the exchanges you’ll experience are between Caroline and a priest that just can’t help but continuously show up at inopportune times. These characters are as bland as they come. That’s not something to blame the developer, Dual Effect Games, for too much – this is their first game. With that being said, there is something just so comforting and engaging in sitting back and viewing some cheesy PS1 era horror dialogue. Admittedly, it’s something I’ve selfishly been missing in more recent horror games. 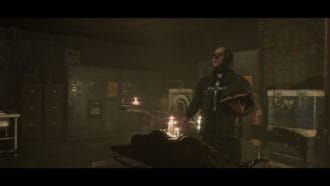 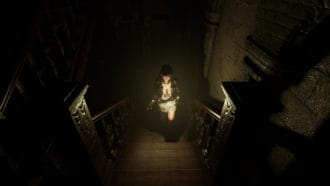 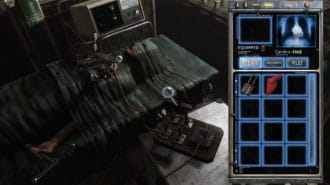 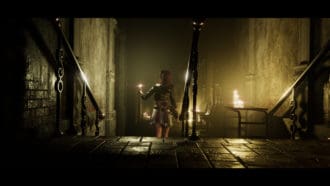 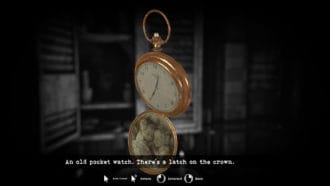 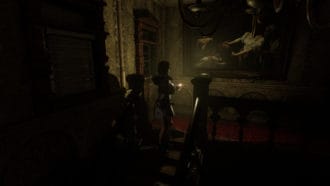 I think the thing that Tormented Souls has most going in its favour is the provided atmosphere. That’s not to say it’s that scary of a game; jump scares are scarce. What I’m talking about here is just how out of their depth Caroline Walker is as a character in this hellscape. Definitely leaning more towards the original Resident Evil, Silent Hill and Alone in the Dark series, it’s hardly a railroaded experience. Instead, a puzzle lies ahead of you in the form of a gigantic mansion. It’s up to you to unravel the secrets, seeing how areas intertwine and how best to proceed, while keeping an eye out around every corner just out of sight from the fixed camera perspective. While somewhat present, why can’t you have more of that, Resident Evil Village?

I think this is what got me through the duration of Tormented Souls. It’s easy and almost unfair to dwell forever on the problems a debut from a studio has. It’s instead worth celebrating the fact that this is a game that set out to do exactly what it aimed to do – provide an experience that the horror genre is currently sorely missing. In the AAA dominating age, so many games are focused more on leading the player where to go, rather than trusting their game and map design more. While far from perfect, Tormented Souls does just this, handing me but a relatively weak nail gun and a spare vial of morphine, then sending me on my way.

The survival elements that are boasted do in fact also reach the par the developer was aiming for. While inventory management is never an issue, with it very well being possible to rack up quite the loaded inventory, all those items can be spent just as quickly. Especially if you’re a nervous player like I, being trigger happy just to make sure those undead monstrosities stay dead. This resulted in me many times slowly and methodically peaking around every corner with my limited arsenal (two melee weapons and two guns with varying levels of strength).

Unravelling the horrors within Tormented Souls

Where its inspiration is really given a run for its money is the puzzle design. While having some painfully abstract problems and solutions (what else did you expect from a classic horror style game?) there are some that genuinely beat those I’ve seen in a majority of horror titles. Tormented Souls does the Silent Hill thing of providing a darker world of that already on offer, with travelling to said realm achieved via mirrors. Creeping into this world, it is still thrilling seeing this B side, darker horror version of the environments you were just in. It’s even more engaging when you’re interacting with this world to affect that of the one prior.

A lot of these puzzles across both worlds are highly interactive. This can vary from examples like the numbers game of finding the right fuses to switch to create just the right amount of power for a generator or that eureka moment when you realise you have to manipulate an item in your inventory to complete the next step. One clever highlight was taking a stethoscope to a statue, learning and memorising the heartbeat it so peculiarly emits and then replicating that on a door knocker to gain further entry. Oh, so fun and oh so engaging.

Never quite being the enthralling experience it needed to be, though never dipping into anything lower than decent in quality, Tormented Souls is a solid indie debut. It may be but a blip in the mainstream scene but it’s at least a foray worth checking out for those that have a hankering for the horror games of years past.

Tormented Souls is available on PlayStation 4 & 5, Xbox Series X|S, Xbox One, Nintendo Switch and PC via Steam. Check it out.