Dap is a Melbourne made horror adventure you should be playing

One of Australia’s most creative 2021 games and a title releasing just before the thematically appropriate spooky season is Dap. This indie horror adventure has only recently debuted from Melbourne-based husband and wife team Iris and Paul, operating under the alias Melting Parrot Games. Its unique yet effective approach to horror and the gorgeously haunting environmental and character art piqued our interest when we first noticed this game back at PAX Online 2020. Now, as of September 29, the full release is upon us and it’s been such a pleasure experiencing the title’s unnerving yet equally endearing atmosphere.

Speaking with Checkpoint Gaming in a recent interview, Iris and Paul told us that “we made Dap to learn how to make games.” They described the feeling of releasing the game as giving it up to other people. It’s almost a sense of beautiful loss with Iris telling us that “it’s not ours anymore, it’s everyone else’s.”

The game sees you control a small, almost-human-like creature known as a Dap who navigates a dark and hostile natural world. Your Dap will come across other Dap who communicate, much like Pokémon, by saying their own name. You can greet other Dap and get them to join you on your journey where they’ll be utilised as firepower by shooting down your foes or by standing on pressure plates and allowing you to move beyond certain points. It’s in this Dap acquisition mechanic where the game has been compared to Pikmin – but obviously in a much more macabre way.

Interestingly, Iris and Paul told us that they’d never actually played a Pikmin game before. Although that doesn’t mean the couple isn’t flattered by the comparison. “To be honest, neither of us have played Pikmin before… We’re aware of Pikmin, I think it looks cool, I’d like to play it. But yea, it’s just kind of catchy – Horror Pikmin is just kind of a thing people say. I can see the comparison.”

Iris, who is the talent behind the game’s art, also went on to describe her work in a bit more detail. She told us that “There’s relatively little that I do of actual drawing, the rest is all processing over and over and over until it creates a digital effect. I like creating different textures because I think it makes you feel a certain way. Combining the digital element with nature really is, I think, unique.”

Personally, I find Dap’s art to be incredibly novel and engrossing. It’s dark yet piercing, it’s digitised yet natural, and possibly most impressive, it’s horrific yet adorable. Pair those engrossingly unique visuals with genuinely impressive sound design and you get a game with production values well beyond what you’d expect from a newly formed, two-person studio. 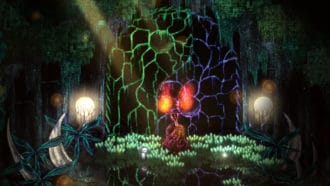 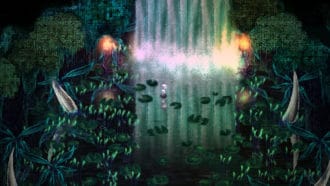 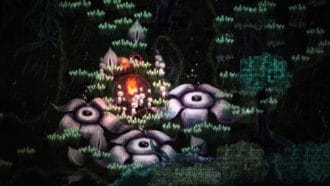 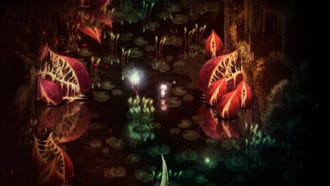 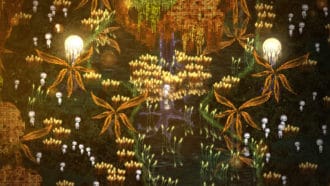 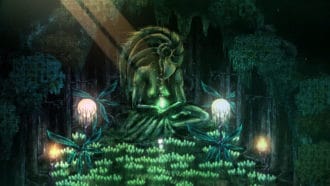 Dap is what I’d describe as a slow build of horror. This isn’t your typical jump-scare game, instead, it relies on an impressive atmosphere that imposes dread upon the player. The early stages of the game dabble in horror but the intensity is raised by the time you reach the game’s third chapter. When I asked Iris and Paul about their love for horror, Paul told me that “I love horror. Specific types more than others. I love the psychological stuff like David Lynch and I love The Shining… and I love games that have horror in it… and Iris seems to like watching me play horror games – one step removed from it.”

“We had sort of a catchphrase when we were developing [Dap] to always go for horror. Horror can give you an excuse to do just really weird, crazy, creative things… It’s like the rules are off. People can let go a bit more with their ideas. They’re not tethered to any kind of reality. That’s one of the things I love about horror. I just love the feeling of it. It just gives you this really weird, dreamlike feel. We hope we’ve done anything even remotely like that.”

It’s noteworthy to point out here that Dap is quite unlike the typical game that tends to release out of Australia. We like to celebrate quite cute and cuddly games here in Aus, and if you look at our most successful releases, they lean firmly on the side of adorable and accessible. I’m definitely theorising here, but it’s possible that there’s a cute bias here in Australia which is what left Dap awardless at the 2021 Australian Game Developer Awards despite cleaning up at the hugely renowned Japanese indie game festival, BitSummit. Regardless, the game deserves recognition. It’s easily one of my favourite local releases of the year.

“Horror can give you an excuse to do just really weird, crazy, creative things… It’s like the rules are off.”

Dap is light on narrative, instead opting for more cryptic dialogue that asks more questions than it answers. The ambiguity and mystery here definitely add to that atmosphere, with interactions with non-hostile characters often leaving me unnerved and unsure of their intentions and my safety.

The game does introduce new hostile and non-hostile characters as you play. And interestingly, Iris and Paul describe the world of Dap and those characters within it as connected and related. Even your foes can be traced back to a Dap origin. Because of this, Iris, within her art, was able to evolve on base concepts in some disfigured and macabre ways. “It’s about taking what’s already there and twisting it.”

The most obvious connection comes from the corrupted Dap, an angry red variant of our friendly creatures who turn aggressive from exposure to spores. It’s a mechanic utilised within gameplay too, as you occasionally find yourself navigating spore-filled areas with haste so as to not turn all of your Dap followers into evil counterparts. Less obvious connections can be found in some of the other creatures within the game, with Iris and Paul describing them all as beginning their life as Dap and corrupting in one way or another. It’s one of the stronger themes explored throughout the game. We’re all born innocent after all, it’s the world around us that shapes us in unfortunate ways. “The way we look at it is kind of a metaphor for different people and things that can happen to people… As you journey through life you can pick up some baggage and people can morph a little bit.”

It’s not too often we hear of games developed by a husband and wife duo, and I couldn’t help but wonder what kind of strain a high-stress job like game development can create on a relationship. Paul was very candid in his answer:

“It hasn’t been easy. It’s been really hard. It’s been amazing. The highs are really high. The lows are really low. A lot of friction, a lot of arguments, a lot of disagreements about the game, difficulty, the directions it’s going in. It’s basically been nonstop. But we just knew that we were really passionate about what we were doing. It just felt like, yes, this is what we should do. Definitely we achieved a synergy that we didn’t have previously… We’ve definitely learnt heaps, but I would struggle to recommend to do it. It’s very intense. It can cause a lot of issues. But we’re happy with what happened. And we want to make more games because we have a special chemistry together.”

It most certainly sounds like there’s more to come from Melting Parrot Games. In fact, when I asked about what’s next, Iris herself told me that “the ideas are just pouring out of Paul.” I for one am excited by whatever this duo achieves next and I’d implore anybody with a passing interest in creepy games to take a look at Dap which you can find on both Steam and itch.io. A big thank you to Iris and Paul for chatting with us here at Checkpoint Gaming and if anybody wants to keep up with the studio, you can follow them on Twitter or find them on their website.