Some weeks after Life is Strange: True Colors has released, players have aptly had their chance to acquaint themselves with the latest narrative venture and its characters. Life is Strange: Wavelength, serves as a prequel DLC to the recent events, putting players in the shoes of Steph Gingrich, a key character in both True Colors and the earlier Deck Nine developed series adventure Before the Storm. Here, Wavelengths maintains as a good contained experience, while wholeheartedly providing connective tissue between other key stories in the franchise.

Spinning decks and broadcasting your feelings across the airwaves

Life is Strange: Wavelengths takes players right back to the mountainside town of Haven Springs, the setting of True Colors. Only, it’s one year prior to the horrific events that occur in the full game. Steph takes up a job at the local record store, serving as both the manager here and DJ at the in-shop radio station. Where True Colors showed us good indicators of what her day to day work life may look like, Wavelengths goes all in. In fact, the DLC serves as something akin to a bottle episode, with Steph rarely speaking to others. We also never see her outside the DJ booth or store for the whole runtime. Instead, we get a brief, couple of hours long exploration of a year in the life of Steph and her DJ duties, spanning four seasons.

That sounds like a monolith of a task. How do you make a video game story engaging with no variation in environments and little characters to bounce off of? Thankfully, Deck Nine manage to pull it off. Where players will get most of their trademark series dialogue (beloved or otherwise, depending on who you talk to), is in the live calls Steph receives in the studio. These calls serve as moments where you’ll provide advice to the callers under the guise of her (non-existent) ability as a psychic. Calls you’ll receive include those from strangers (such as a father wondering how to better connect with his son that recently came out to him) or familiar faces including Gabe Chen, months before his untimely demise. When posited with questions, Steph will roll a D20 tabletop die, providing positive or negative information to these callers, depending on the result.

“Wavelengths maintains as a good contained experience, while wholeheartedly providing connective tissue between other key stories in the franchise.”

Aside from taking calls and spinning decks for radio play, there are other activities Steph can get stuck into. Typical chores and busy work that come with running a retail shop occur. Here, players will get to organise the record collections, track down customer’s orders and do general tidying duties.

While not all of these are the most exciting of activities, they’re hardly detracting from the steady pace Wavelengths has going for it. I was engaged throughout and this was thanks to the fact that, while lacking in a power, Steph makes for a strong character in the Life is Strange universe.

Still, there are more engaging activities than that of running a somewhat dead record store would suggest. In your downtime, Steph can slowly craft a song throughout each scripted season, adding in synth here and vocals there. By the last gameplay moment, you get to see the final culmination of that song she’s been working on. Mine ended up being a hot, lo-fi mess that you’d likely find on the dark corners of Soundcloud. It’s okay, Steph. I still love you.

Steph can also engage in some good old fashioned online dating. At Wavelengths’ beginning, you’ll get to build your dating profile, spicing it up to match your vision of the hero. Soon after, in painfully real fashion, you’ll be regularly checking Steph’s phone in-menu. You’ll experience some big dating struggles as a lesbian situated in a small town. Matching with bots, those that live far away and engaging in exchanges that quickly delve into poor, messy communication all ensue. Even without having direct face-to-face character interactions, Life is Strange as a series once more nails it here, highlighting better than ever what its like to be a queer individual in your youth, exploring the vast, wild world of dating. 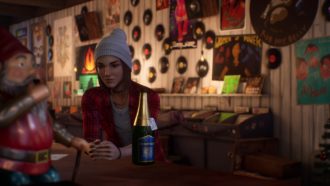 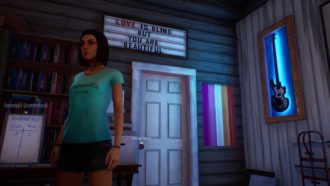 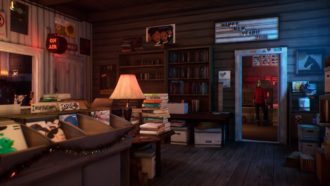 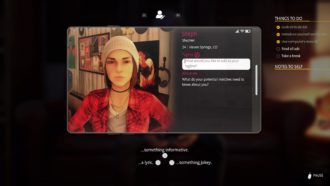 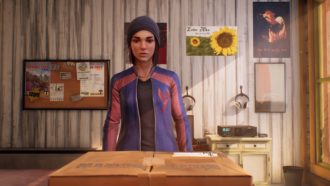 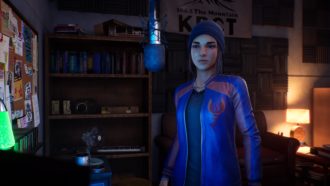 Life is Strange: Wavelengths serves as connective tissue for the hit franchise

Players intimate with the Life is Strange franchise may be familiar with how Steph as a character has slowly become more prominent. Originally appearing in Before the Storm, a prequel to the original game, it’s here we met Steph as a teen, at Blackwell Academy high school with main characters Chloe Price and Rachel Amber. All those years prior she was a typical, dorky teenager invested in D&D. Her character changes both on and off-screen throughout the years. Despite being her own character (and a strong supporting one at that) in True Colors, I saw comparisons between her and Chloe. In Wavelengths, she’s more developed than ever. I now have a clearer picture than ever about how and why Steph is the way that she is. She’s a character heavily influenced both by those around her and her environment. How can she not be? She’s been through some stuff.

Arcadia Bay is the home to our heroes of the first Life is Strange game, Max and Chloe. With Steph being a classmate and friend of Chloe, she was present or at the very least privy to the events that occurred in the original game. My save state for Wavelengths depicted the fact that both Chloe and Rachel died in Life is Strange.  This much is clear later in the expansion when we see just how this has impacted her. Steph has a remaining friend from Arcadia Bay in her Blackwell Academy classmate Mikey. This is a figure she keeps away at an arms’ length throughout the majority of the story, struggling to continue to remain in contact due to the hurt that still rings from the tragedy.

That’s the thing. The Arcadia Bay tragedy is fleshed out more than ever in Wavelengths. Its impact and gravitas are clearer than ever just when you see how it’s affecting Steph, an originally more minor character. Chloe and Rachel’s life impacted everyone. It’s world-changing in the Life is Strange universe. Of course, she’s experiencing flashbacks to the events all those years ago. She was a teenager at the time and never really got to process the events.

When Wavelengths wraps up, the timeline has caught up to the beginning of True Colors and the adventures and tragedy that all will soon occur there. It’s a neat, tidy little bow tied on the end of a wonderful expansion and a good link between other Life is Strange stories. Steph is entirely developed and a strong character in the series. It’s an experience that, while relatively contained, is crucial to big fans of Life is Strange if they’re after more connective threads in the long-running series.

Sweltering through a hot summer’s day on the last day of Pride, decorating your record store and booth in both Christmas and Halloween decorations, Wavelengths is an expansion bursting with vibes. With it, comes a character piece well worth exploring.

Life is Strange: Wavelengths is available now on PlayStation 4 & 5, Xbox One and Series X|S, and PC. Check it out.