Roll7’s OlliOlli series is a bit of a dark horse for the skateboarding genre of games. Already it has the obstacle of being a niche in its category – it’s a 2.5D experience, rather than the typical 3D, exploration-based nature you’d otherwise see. Add on top of that the fact the genre itself is well past its golden age, you’d be forgiven if it’s a series that passed you by. With that being said, the team’s latest effort, OlliOlli World, is shaping up to be something magnificent. Spending some time hands-on with it prior to its February release, it transformed into a game high up on my 2022 radar.

OlliOlli World will situate players in the shoes of a character they themselves will create. In the preview alone it’s clear the character customiser on offer will be quite extensive. No gendering of your character occurs; only the modding and morphing of their body shape and height. This along with the variance in clothing, be it headscarves, dresses, skirts, funky button-ups and the likes, leave plenty to play around with. I let my little avatar taper towards a gender-ambiguous punk with dyed hair, tattoos and a dress with a pattern akin to the vibrant squiggly fashion you’d see on bus seats. However, that’s just one example. Characters can easily reflect one’s self or be as distanced from their image as they like. Representation matters and Roll7 look to really be going the extra mile here.

This customiser implements well into OlliOlli World’s… well, world. You see, the campaign’s adventure will take you on a journey across the lands of Radlandia, a world entirely crazy about skateboarding. You’ll meet weird friends along the way such as the hippy, pipe-smoking ‘Skate Wizard’ Chiffon, soon to be retiring and intent on having you take up their mantle. Joining them is a young camera opportunist girl by the name of Suze, a conspiracy toting punk by the name of Gnarly Mike and an older gentleman by the name Dad. This crew, known as The Meltas, will be with you throughout your entire journey and will chat with you in between levels, doing well to bolster the colourful and creative world Roll7 are developing. 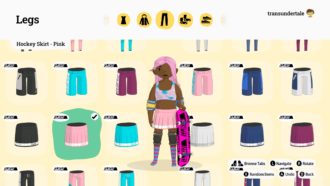 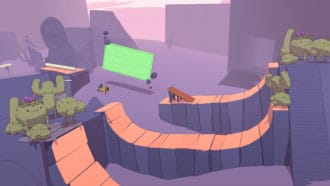 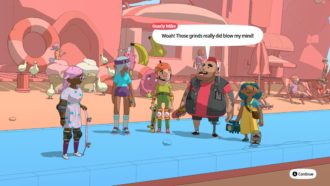 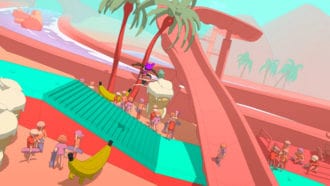 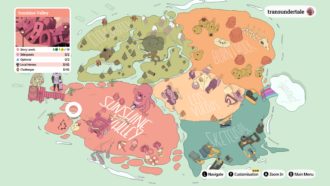 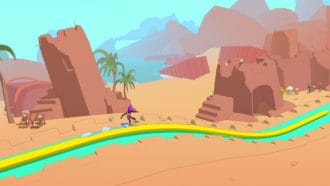 When it comes to the areas you’re set to explore, I got to check out three of the five on offer. Sunshine Valley offers incredibly vivid L.A. vibes. My character would dip in and out of different lanes of an esplanade while ice cream mascots and pigeons flexing their pecs at the outdoor gym made up just some of the curious individuals you’d see in the background. Cloverbrook, the second area situates you in courses within a deep and thick forest. Climbing tall trees and wall-riding past large friendly bumblebees is just some of the escapades I got up to here. Last but certainly not least was Burnt Rock, a desert biome home to Burning Man-Esque festival-goers in alien onesies and crashed UFOs.

Where these levels within these areas thrive is in their attention to detail and the way you navigate them. They’re designed a lot more colourfully and certainly less minimalistic than the series’ entries prior. The biomes are all well realised and populated, while still having intriguing and captivating colour choices that one wouldn’t typically expect — the boardwalks in Sunshine Valley are more of a sunkissed orange rather than white. Meanwhile, Burnt Rock features deep purples. What I took away from this is that the art style and colouring for OlliOlli World are something in between a psychedelic fever dream and an afternoon cartoon you’d catch on Cartoon Network. Something somewhat grounded in reality, but still creative with its fantasy.

The gameplay loop looks to be simple in OlliOlli World, but effective. Levels will feature several challenges throughout them. These can look like completing feats such as completing a defined gap or pulling off a gnarly trick in front of a crowd of onlookers you’ll pass by. Score challenges and completing the level without using any checkpoints make up the remainder but, if you’re ever intimidated, these can be ignored and you can simply do your best to complete the level. That’s all that’s needed to progress throughout the campaign. It’s welcome too. While the skating set pieces themselves are thrilling challenges and net you with other cosmetics for your character, there are times when assigning low pressure to myself gave me more breathing room and enjoyment. Online elements such as leaderboards and challenging your friends to custom courses will be available at launch, adding more of a social factor, though in my preview time I only saw so much of this.

“…the art style and colouring for OlliOlli World are something in between a psychedelic fever dream and an afternoon cartoon you’d catch on Cartoon Network.”

The 2.5D gameplay style means navigation around levels is all the more creative and varied than before. Courses that you jump into can have several routes and lanes, with regular shifting and snaking between them. Careful wall riding or grinding here or there can make you reach heights and locations otherwise inaccessible, though taking a more conservative approach can also be rewarding, finding collectables and goodies in nooks found in routes that on the surface level look to be the intended route but very much isn’t. What also comes from this is replayability. Not every challenge or route of a level can be completed in one go. The game knows the appeal of this and actually saves your challenge progress meaning you can knock out some feats in one go and others in another.

Otherwise, OlliOlli World as it stands so far teases an ultimate skateboarding sandbox experience for those to get their teeth stuck into. Tricks, leaps and grinds are all performed by a flicking of the left analogue stick on the controller, rather than games like Tony Hawk’s Pro Skater that ask you to use the face buttons. Manipulating this in different ways performs either standard or advanced tricks. Previous OlliOlli games required players press the A button on landing to not bail or ruin their streak. While that can still be used to better maintain your momentum and boost your score, it’s not as crucial this time around. Already, this allows for less simultaneous controller wrangling, making OlliOlli World all the more accessible.

The feel here is excellent and speeding through the lanes of busy courses at a fast rate really is thrilling. If you have the required reflexes you can become quite sprightly. Wall riding long gaps, seeing yourself clear the danger below, viewing the gorgeous environments… it’s hard not to be invested. Before long, you’ll find yourself getting the hang of things, managing to put together some killer combos and high scores. It undoubtedly requires patience, but at the very least is rewarding as your progress is all the more tangible, checking off lists of feats and finding shiny new items to dress yourself up in. If all else, allow yourself to bail, press that restart button, pick yourself up your feet and go again. It’s worth it. 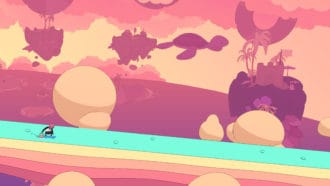 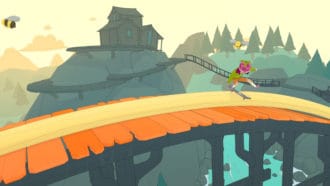 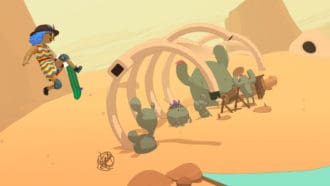 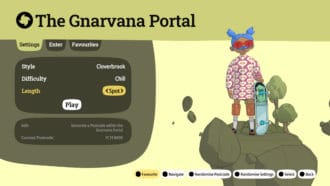 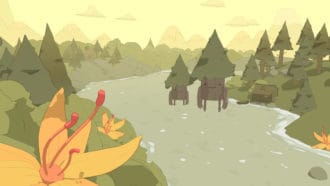 OlliOlli World is a game I can easily see impressing those itching for a new skateboarding experience. Leaderboards to see how you track against friends, plenty of checklists to polish off and fluid ‘easy to pick up but hard to master’ gameplay is all on offer to reward and drive the player forward. Combine that with the breathtaking cartoon-style vistas to breeze through and this is a game that looks well worth investing your time in.