Shinji Mikami has built a legacy on creating memorable, iconic horror experiences. The man behind Resident Evil has always brought some compelling spooks to the scene, most recently with underrated series The Evil Within. Now, his studio at Tango Gameworks is tackling a new kind of fear; this time in a twisted, sci-fi style Tokyo, with strange creatures and faster paced first-person combat. We’ve now seen a large chunk of Ghostwire: Tokyo behind closed doors and, with some more solid understanding of what kind of game this is going to be, are tentatively excited for some terror of a different kind when the game launches next month.

You’ll play as protagonist Akito, seemingly the last remaining soul available, as everybody in Shibuya has disappeared. It’s up to you to figure out why, and try to bring them back. Akito is inhabited by a strange being, KK, who looks to cause Akito some trouble as the spirit courses through your veins (along with providing someone for you to banter with). Of course, this allows you to have a range of supernatural abilities so that you can more easily navigate the streets of Shibuya, now full of creepy monsters roaming around known as Visitors, manifestations of loss and separation.

These Visitors really dial into some creepy folklore; in the gameplay we saw, there were a bunch of Slenderman-esque dudes that carry umbrellas, and daintily walk towards you with a quickness that is quite uncomfortable. Then there’s the headless girls in school uniform who run towards you and leap at you. If this is a baseline of what we can expect when the game launches, they’ve certainly nailed the vibe of this particular nightmare. You’ll have abilities to deal with them, and after dealing enough damage, you will then be able to pull out their “Core”, which deals the death blow. Stealth kills offer an instant takedown opportunity. None of this is especially new or creative, but it looks to be incredibly satisfying as you rip these creatures out of reality and send them back where they came from.

“…it’s clear that the game is aiming for a different sort of uneasiness, more psychological than gory.”

You’ll need to cleanse areas to gain access to continue your main mission. This is where some of the open-world trappings begin to show, with a glimpse at the map indicating plenty of secrets and collectables to be found for those who are game. Cleansing a Torii Gate removes evil from the immediate area, and unlocks rewards within shrines. Lingering spirits give you side quests. Corrupt areas act as outposts of sorts, where you have to kill Visitors who are lingering within to regain control of that space; donating to the shrines allows you to specifically track other collectables or objectives on the map. This might sound familiar, and it is, but the style in which you complete these formulaic open-world missions looks to keep things feeling fresh. Considering the utterly compelling open world section of The Evil Within 2, I have faith that the team can pull off making the template more interesting than usual.

There are other quirky twists you can expect, too. Collecting spirits left floating in the streets allows you to potentially purchase upgrades, and the local shop keep is a floating Yokai in the form of a talking cat. Some of these Yokai can be caught, aiding you in your quest. Even lock-picking has it’s own twist; instead of traditional means, you’ll need to briefly memorise and replicate a magic seal with your hands, which is also how you exorcise evil spirits. It’s nice to see some unique takes that match the universe and make the game stand out.

A story quest kicked off during our time with Ghostwire: Tokyo; a mystical barrier surrounds the building, trapping you inside it, forcing you to find magic stones to destroy within so that you can be freed within a time limit. Inside this barrier there is “underworld interference”, where rooms quite literally get turned upside down, objects move of their own volition and the lights turn blood red. It reminded me of some of the strange sequences in Observer or The Medium, playing with the environment in a creepy way to push you outside of your comfort zone. In this example, it’s clear that the game is aiming for a different sort of uneasiness, more psychological than gory. 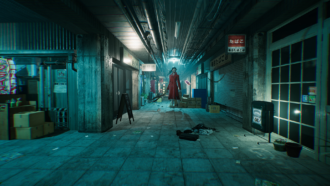 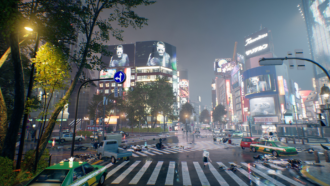 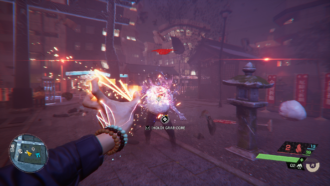 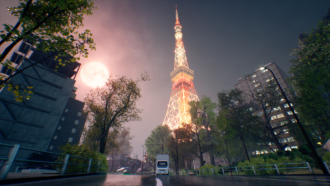 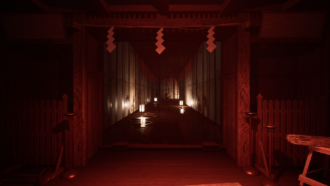 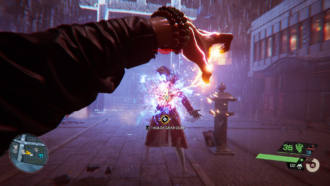 Other abilities shown include a magical bow and arrow as a weapon, while another allows you to defy gravity and glide from rooftop to rooftop to access other areas. Spectral Vision acts as your detective mode; in the case of the segment shown, it was used to track the whereabouts of the character who tried to capture you inside the building. It also acts as a way to see Visitors through walls and search the area more thoroughly. All the while, antagonist Hannya pops up in visions to taunt you as you progress, clearly a formidable and intriguing foe who runs this now ghost-filled town.

Visually, Ghostwire: Tokyo is a fantastic take on making Japan incredibly haunting and strange. As you explore, objects linger and float awkwardly, glitching out in place. It’s incredibly colourful, too, coming across as a more psychedelic-neon horror that is completely gorgeous, as reflections of light bounce around off of the buildings and the water on the backstreets, while the glow of spirits pulsate throughout the environment. It doesn’t look scary per se, but it looks incredibly intriguing, and somewhere I think I’d happily lose plenty of hours investigating.

It was noted during the gameplay session that Ghostwire: Tokyo is in the “final polishing” stages; considering it was set for release last year, we now know that we don’t have long to wait at all to explore this creepy, weird version of one of the worlds most iconic cities. Coming into the gameplay demo, I wasn’t entirely sure what to expect. Afterwards my only thought is that I absolutely cannot wait to get my hands on Ghostwire: Tokyo and explore every nook and cranny of this strange world.