Rainbow Six Extraction may have only launched last month, but it’s already kicking off its post-launch content plans with the first Crisis event, called Spillover. For all of the good things I had to say about the game in my review (as I still think it’s a compelling and addictive multiplayer experience), one of the core pieces of feedback it received on launch is that it would be nice to have some more modes to sink your teeth into. That’s where Crisis Events comes in, and we had the chance to play the new event, Spillover, ahead of its launch today.

Crisis Events are major, limited time events where players face unique large-scale threats in the Containment Zone, and the first one will really push your squad to the test, as you have to defend multiple areas from wave after wave of Archaean enemies in Spillover. Presented as “the ultimate defense experience”, you have 25 minutes to complete a total of 9 defensive objectives in the one location. Considering each defense takes 90 seconds, that leaves you limited time to prepare defenses in each spot before triggering the oncoming horde of creatures.

Within the one map, each of the 9 defensive spots need to have a cannister planted, which triggers the horde to attack. Before planting, it’s wise to use your best Rainbow Six Siege strategies, by reinforcing walls, barricading windows, planting mines and fortifying the area before the attack starts. Once completed, you can choose to extract or continue on for more rewards and XP.

“Extraction is a difficult game at the best of times, and this mode is no exception.”

Each cannister you plant triggers a specific enemy type, too, either cloaked enemies, Spored enemies (who can blind you), or Elite enemies that are much tougher to take down. You can choose the order of which you tackle them, but the more you decontaminate, the harder it gets. They’ll be instantly alerted, they’ll target the cannister as a priority and things get stressful, fast. There’s limited healing and ammunition resources available, too. On our best attempt, our crew managed to make it through around 5 of these waves before succumbing to the horde, and when we tried to plant two cannisters at once, we fell very quickly. Extraction is a difficult game at the best of times, and this mode is no exception.

Considering the style of mode leaning into defense, defense-based operators are recommended, like Tachanka, Rook, Gridlock, Doc or newcomer Zofia. Zofia is the first new operator to be added to Extraction since it launched, who fans may recognise as Ela’s sister, focused on survival techniques and asset extraction, with a stun grenade-launcher as her primary ability. Additionally, new REACT tech is available in the form of the Auto-Turret, a deployable turret that automatically targets and attacks Archaeans. We didn’t get the chance to test this in our hands-on time, as you’ll need to get 500 kills to unlock it during the 3 week event period. Once you unlock it, you’ll be able to use it across all modes, but make sure you earn it before the event cycles out, or you’ll have to wait to get it again. 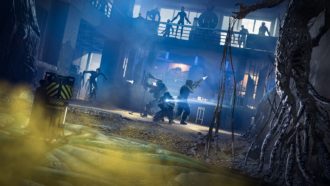 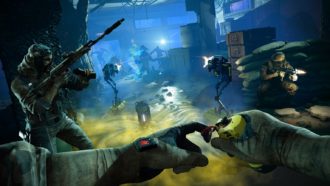 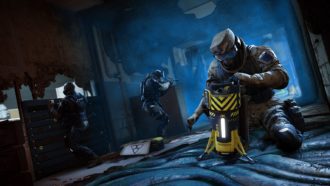 The pace of Extraction is usually quite slow and stealthy, as you move from zone to zone, destroying nests, preventing enemies being triggered to attack you and giving yourself the best chance of completion over three rounds. Spillover is the opposite of this. While it does allow you some time to prepare between waves, enemies are constantly racing to your location at all times, meaning it’s a target-rich environment and a different level of intensity. It dials into the faster pace of what Rainbow Six can be, and was a lot of chaotic fun to play; when we failed, we were laughing maniacally, in that “how the hell are we going to do this?” kind of way that makes the core gameplay loop so intriguing; but, regardless of our failures, we couldn’t help but dive in straight away and try it all again.

Spillover is the first of many Crisis Events and updates to come to Rainbow Six Extraction, and it bodes well for the ongoing support we can expect considering the short timeframe since launch that we’re already seeing this new mode. If they continue to experiment with the different things the game can do, we’re in for a fun ride in the future.

Crisis Event: Spillover is playable now in Rainbow Six Extraction, which is available on Xbox One, Xbox Series X|S, PS4, PS5 and PC.