Back in early 2021 I had the pleasure of checking out 30XX just before it entered Early Access on Steam and I was pretty impressed. Retro influenced 2D side-scrolling shoot ’em ups are a dime a dozen, but many of them miss the mark when it comes to the nuanced gameplay the genre demands. So 30XX with its strikingly beautiful visuals, excellent soundtrack, tight gameplay, and⁠—for the most part⁠—excellent level design, was a breath of fresh air.

Over a year down the track and 30XX has received its latest substantial update. When I last played 30XX, only six of the intended eight levels were available and there were some bugs here and there, which was to be expected given it was still a work in progress. Now, with the latest update, all eight levels are available and there are also a number of other changes and additions. But has the game been improved or has it been broken?

In the 12 or so months that have passed since I played the Early Access release version of 30XX, there have been a bunch of smaller updates that I hadn’t experienced. Jumping into it now and taking in all of the changes in one big helping was a shock. Aside from the new levels, the main thing I noticed is that there is a WAY bigger selection of skills available to the player, which is both a positive but also kind of a negative. The issue is, yes the variety is exciting, but not all of them are useful so you could be playing for a long time before you get something essential—double jump for example.

For every new useful skill available, such as a handy dash jump, you come across things like hover boots, which in an action-packed game with lots of platforming proved to be more of a liability then a useful skill most of the time. During Mega Mode (which is my favourite way to play 30XX), the skills you obtain as you play is seemingly random, which is a bit of a problem considering some of the procedurally generated level designs appear to need certain skills to progress. Especially as you get onto the harder stages down the track, it is important to have useful skills early on and this is not guaranteed. 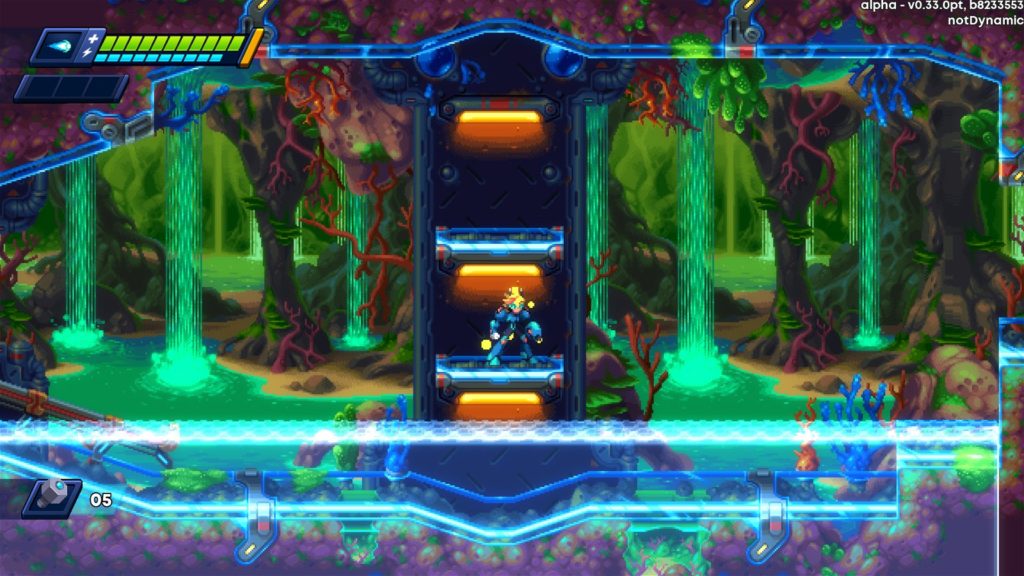 The two new levels fit in perfectly with the already excellent selection on offer. Dustria, The Forgotten Factory, was actually added to 30XX as part of the Fires of Industry update last year but Watergrav is brand new and completes the set. Watergrav is set in what appears to be some underwater facility with lots of deep blues and greens. It makes use of gravity change switches (think Death Egg Zone from Sonic and Knuckles) to spice up the platforming. The new enemies are on point, and the level features a neat boss battle. Of course, just like the rest of the game, the new music for the level is also a banger.

When I last played 30XX, I was quite impressed with the procedural generation, with the game’s level design functioning flawlessly. This made playing the same level again in their different configurations a fun thing to do. Unfortunately I haven’t found the same to be true since the update, with a few stages seemingly nigh on impossible thanks to their design and the random skills I had come across. It took a few restarts to get a range of stages that felt good to play, this can be a bit annoying if you play through a couple of good ones then find one that feels broken. 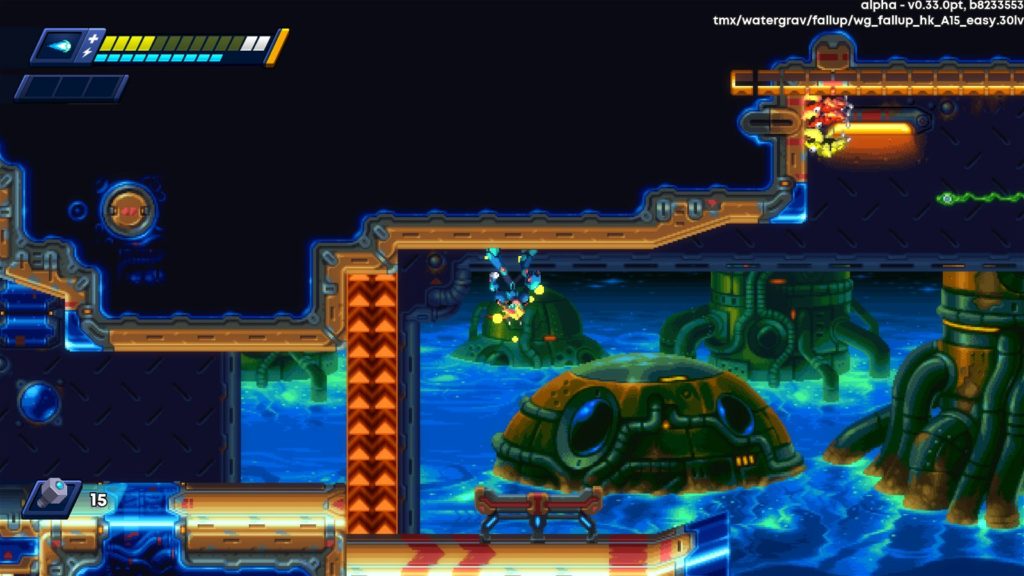 Given that 30XX is still in early access, there is still the odd bug here and there and that is okay. Mainly these present themselves in couch coop, with some of the level transitions missing and for some reason the gravity change mechanic from Watergrav was triggered on another random level for one of us, making the stage impossible to finish. But of course, little niggles like that I am sure will be fixed up by the time the game is considered finished.

Overall, 30XX may be at risk of being tinkered around with a little too much, in many ways the early access 2021 version was an excellent game already, a few tweaks here and there and two new levels would have seen it come out just fine. Batterystaple Games will need to have a think about which skills are useful and which are not, because volumes of content is only great if the majority of it is doesn’t feel like a novelty. Either way though, I still have high hopes for 30XX’s finished version, it is still a fun play as long as you get a decent set of stage layouts to play through.