Kardboard Kings is a newly released collectable card game/store management hybrid coming from Australian studio Henry’s House. Releasing onto PC back in February of this year, the charming indie title invites players to open their own card shop where they can buy, sell, or keep trading cards for their own collection. As customers come and go, you’ll start to form connections with the regulars as you begin to understand the market you’re operating within and watch as your dream shop grows. Offering a lot of heart, a mysterious narrative to unravel, and all the satisfaction of operating your own store, it’s no surprise we were instantly excited by the release of Kardboard Kings.

Luckily, we were able to spend some time with the title and conduct an interview with the game’s artist/designer/writer/composer, Oscar Brittain. Oscar is one of two developers at Henry’s House, the other being Rob Gross who works as a co-designer, co-composer, and programmer on the game. Oscar playfully describes the forming of their relationship with Rob as “like the film When Harry Met Sally, where we suddenly realised we belong together after years and years. I’m Meg Ryan in this scenario”.

A big shoutout to Checkpointer Callum for providing insight and questions after their time with the game, and to Oscar for being such a friendly and detailed interviewee! The full transcript of the interview can be seen below.

Q: Kardboard Kings contains some clear references to a certain trading card game. Is it safe to say you play a bit of Magic: The Gathering?

A: “Yes it does! Rob is the big MTG stan, but I have the attention span of a toddler, so I have like 200 starter decks from all different card games. I just like new, shiny stuff. To be honest though, a lot of the gritty details of the game I took from Digimon Hyper Colosseum, which was a Japanese TCG in the early 2000s. There’s a great article I read about it’s history alongside the big boys of MTG, Pokemon, and YuGiOh.”

Q: We’ve seen a few different takes on games drawing from paper TCGs. What was the inspiration for Kardboard Kings being a store management game?

A: “So the original idea was to make a digital card game where you don’t play the card game. Sort of like a gatcha game, but with a fluctuating market. I pitched it to a bunch of friends and everyone thought I was an idiot. Now who’s laughing? Rob was the only person into the idea, so we just slapped it back and forth, trying to add more depth to it. A big draw was our misguided belief that it would be a quick, easy project. The problem we kept coming up against was how to explain it to people. Eventually, we settled on “you run a shop”, which kinda explained why you were buying and selling cards, but never playing with them.”

Q: Kardboard Kings has some truly beautiful card art from a number of artists. How did you select artists and works that would be right for the cards?

A: “Yeah, I spend many, many hours trawling through instagram, deviant art, twitter, you name it, trying to find artists who had a style that worked. Originally we were going to use stock photos from Adobe, but as the project grew, and we got some funding, we decided we should go all in and get exactly what we wanted for the art. But a huge thanks to the artists, and also to Dean from our publisher, Akupara games, who had to organise all the contracts and money haha. Legit, without people doing that stuff, we would have just had stick figures on the cards.” 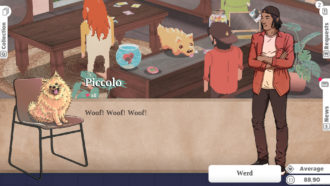 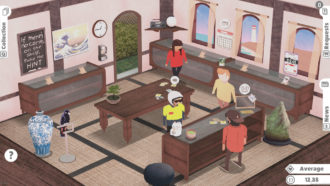 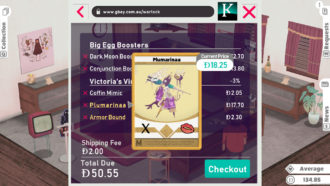 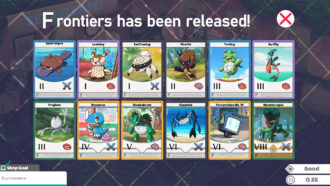 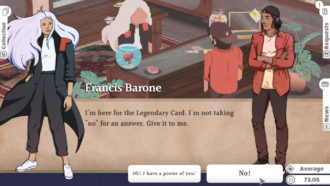 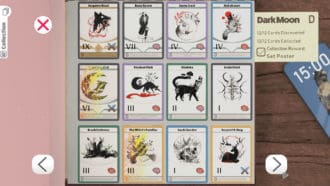 Q: What lessons did you learn working on Kardboard Kings? Were there any particular challenges to overcome?

A: “I guess I learned how to draw a bit haha. And I taught myself how to use DaVinci Resolve to make our trailer. Making the game remotely during the lockdown in Melbourne was pretty hard, and I think I really had to learn to trust Rob’s abilities. I’m so used to micromanaging and doing everything myself. I don’t wanna talk too much for him, but I think Rob learned a tonne about the Unity engine. He really tackled some difficult systems design to get this game working. I definitely learned more about the history and business of card games than I will ever want to share with people.”

Q: One of my favourite parts of Kardboard Kings was the fantastic characters. Are any of the store patrons inspired by real people?

A: “Yes, a lot of the characters are like mash ups of my friends. Weirdly, a lot of my ex girlfriends? But also, most of them we just tried to come up with personalities that we thought would juxtapose well against the more grotty side of card games. Characters like Aoife and Davo were us trying to explore different perspectives on TCGs.”

Q: I always love seeing Australian wildlife represented so I was thrilled to see my coworker is a black cockatoo. Were there any iconically Aussie things you were particularly eager to include?

A: “I don’t know if we thought about it that much. We really just made the world of Kardboard Kings look like what we see in shops and where we live. We had about 5x the normal amount of questions from our localisation team, who I think hate us now. I would write just something dumb like “half chub” and the Japanese translator would be like “Okay, wtf does that mean”. Giuseppe the cockatoo had a long evolution, initially being an old italian barista who spoke broken english, to then being a normal cat, then a talking cat, then a numbat, then a cockatoo. I guess, once we decided he would be a parrot, it seemed weird to just make him a macaw or something. Oh, I remember when Rob added the sound of magpies singing at the start of the day, and that was really cool.”

For those interested in finding out more about Kardboard Kings, you can head to the developer’s website, their Twitter, or just check it out on Steam!