Card Shark grabbed my interest as soon as it was announced last year. Its unique art style stands out first and foremost, but its equally unique premise is just as enticing. A ‘card shark’, also called a card sharp, is the name of someone who wins at card games by either cheating or by taking advantage of inexperienced players. And that’s exactly what you do in this game! We got preview access for the first few chapters in the adventure, and these are our first thoughts.

As the trailers show, Card Shark is all about performing various slights of hand to win every hand of cards you play. These range from very simple card tricks to quite complex schemes that require you to memorise various cards. Many of the schemes will require you to practice a bit before you get them right. The controls keep it simple, though, so it doesn’t seem overwhelming: simple movements with the mouse or joystick, with a bit of button pressing or holding mixed in. The intended difficulty seems to be focused on memorising the schemes themselves and executing them without mistakes.

The goal is to win your hand, of course, but if you peep at your opponent’s cards too long or mess up a button prompt, your opponent could realise you’re a cheat and you’ll have to suffer the consequences. There are always multiple things you need to pay attention to, and it’s not hard to let something slip your attention. When you pull off the scam, though, it’s pretty satisfying indeed. However, I’m a little wary of the control scheme, which seems unwieldy in some circumstances. We’ll need to keep an eye on that.

While it seems a simple premise, the look and feel of the game are absolutely selling it so far. I absolutely love the art style, which is the spitting image of medieval drawings and tapestries of the Medieval era. The 2D animation is like what you’d see in a puppet show.

The story of Cark Shark surprised me, primarily because I didn’t truly expect it to have one at all. I imagined rooms of nameless aristocrats falling prey to my various schemes, and my riches growing and I hone my craft. but that’s not the experience I got. 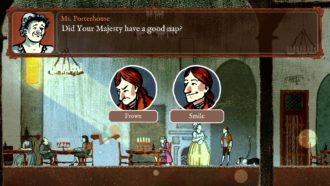 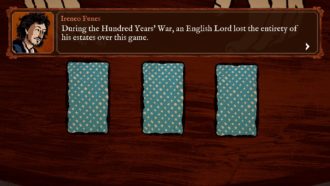 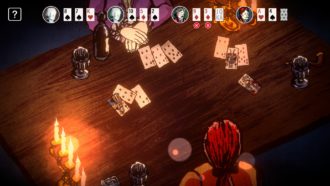 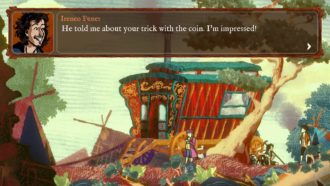 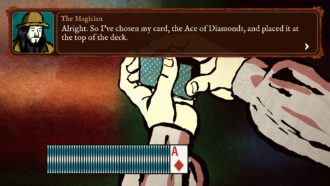 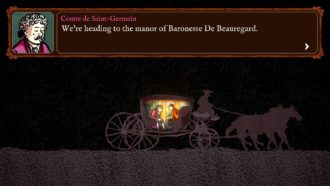 The game is set in 18th century France, with all of the ruffles, frills, and hoity-toity characters to match. The protagonist is a youth who can’t talk, who starts the game waiting tables at a run-of-the-mill tavern. He gets taken under the wing of the tricky Comte de Saint-Germain, who teaches him the art of cheating at cards. Although at first your mentor’s goal appears just to be getting rich, it soon becomes clear that he is chasing a secret of some sort. Despite the short time I had with the preview, things escalated quickly and the protagonist was thrust into more actual danger than I expected. There are even certain circumstances where it seems you can actually die if you play your hand poorly. Interesting!

All up, I played about 6 hours of Card Shark before reaching the end of the preview — it would have been less, but I got stuck on one of the more advanced schemes and lost all my hard-hustled gold. I will be keen to learn more tricks and schemes when Card Shark comes out on June 2nd on PC and Nintendo Switch. Stay tuned to Checkpoint Gaming for when our full review is dealt out closer to the release date!