Revealed last month during Sony’s State of Play, Rollerdrome is a stylish death sport mixing rollerskating speed and tricks with plenty of guns and death. It’s like Tony Hawk’s Pro Skater mixed with the fast-paced action and bullet-time mechanics of Max Payne, all with a lovely and vibrant cel-shaded art style.

Rollerdrome is releasing this August from UK developer Roll7, who most recently made the critically acclaimed Olli Olli World. We got a chance to go hands-on with a preview version of the game, offering us a look at the first 6 stages. Strap into your rollerskates tightly, because this release is undeniably a wild ride.

“…a visually striking experience that maintains its impact both in static screenshots as well as in glorious motion.”

Rollerdrome’s commitment to its cel-shaded aesthetic makes for a visually striking experience that maintains its impact both in static screenshots as well as in glorious motion. Whilst the audio-visual experience may paint a vibrant picture, the world itself is actually quite dystopian and grim. You play as Kara Hassan, a newbie to the Rollerdrome bloodsport whose life is constantly on the line as she moves through qualifying stages of the televised event.

There’s a persistent feeling of abusive power structures in the Rollerdrome universe. Reminiscent of the ruling class in The Hunger Games or the Elite Society of Squid Games, those in power watch as participants die for their amusement. It’s dark in tone and makes for an intriguing premise that begs for further exploration. Within the preview, we see glimmers of that lore and backstory as news articles and broadcasts can be consumed between rounds of Rollerdrome action. The narrative is largely sidelined, though I am intrigued to see more and see where it goes upon the game’s full release. 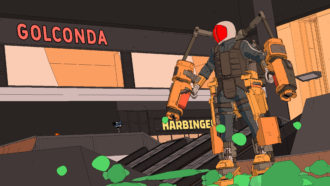 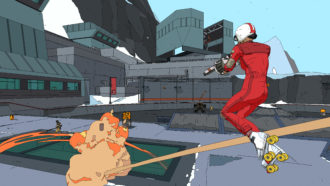 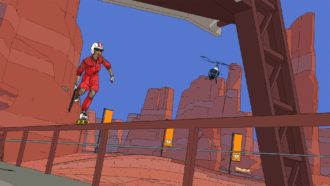 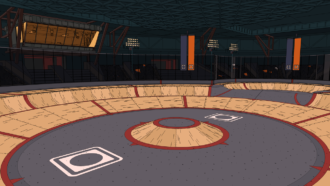 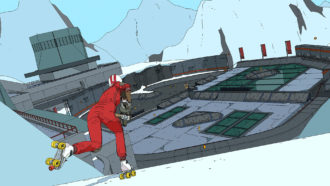 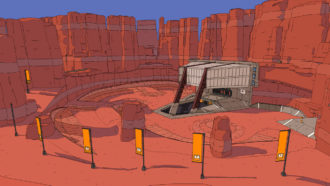 Certainly the most involved element of Rollerdrome is the rollerskating/shooting gameplay. This takes place in tournament-style levels as Kara qualifies for later and later stages of the Rollerdrome competition. Each level that’s played takes place in a new arena that’s built like a skate park. Full of ramps and rails to grind, each level is thematically different and unique, adding to the game’s personality and versatility. Much of your playtime will be committed to maintaining control as you constantly skate around these arenas in the third person. Foes called “House Players” will spawn around the arena and it’s here where Rollerdrome embraces its action and bloodsport identity.

Splitting your focus between skating, dodging enemy attacks, and shooting can be a little overwhelming initially, though thankfully the game offers some great tutorialisation stretched over multiple stages to help slowly develop your understanding. A round ends when you either kill all the House Players and succeed or die trying, at which point you’ll simply start that round from the beginning.

Throughout the preview, we were given access to 3 different guns—the dual pistols, the shotgun, and the grenade launcher. Each weapon comes with limited ammunition and you’re able to take aim and blast away whilst in motion. A bullet-time ability (called Reflex Time) can be used fairly liberally, allowing you to slow down time to assist with your accuracy and adding a stylish flair. Dodging telegraphed enemy attacks via a dedicated dodge button will be crucial, and doing tricks like grabs and grinds also refills your ammunition whilst you play.

“…options are available from the jump to remove barriers for players who may otherwise struggle. It’s really great to see.”

The combination of skating and shooting can be a little tricky to master. In fact, throughout the preview, I never truly felt as though I mastered the concept in its entirety. I’d find myself dying as I focus on doing tricks or killing enemies and not noticing that sniper lining up their shot at me. I’d also fling myself off the side of the map as I skate backwards, focussing on that enemy I wanted to take out rather than the cliff face I was careening towards. Death invariably means restarting the level from the start, so it can be a little disheartening to mess up when you’re so close to completion.

Challenges are offered up with each level, encouraging you to perform certain tricks in certain locations, collect tokens, reach a certain combo metre milestone, beat high scores, or a myriad of other optional tasks. Reaching higher levels of the competition will require a certain amount of prior challenges to be completed, making the tricks and high score portion of this death game unavoidable. It’s a great concept that melds the world of skate games and the world of shooters into a fairly neat package. Even better is the range of accessibility options available for players to tailor the experience to their needs or preferences. Invincibility mode, removal of the challenge prerequisites, and many more options are available from the jump to remove barriers for players who may otherwise struggle. It’s really great to see.

My time with Rollerdrome is definitely one of hope and intrigue. I love the concept. I love the narrative buried underneath the gameplay. I like the combination of performing skate tricks whilst simultaneously engaging in a shooter. I like completing challenges and competing for high scores. And it’s all done with a level of competency that makes the entire package quite enticing. I hope upon its full release your average player won’t get overwhelmed by the many gameplay elements or disparaged by the replayable nature of the experience. I personally remain optimistic.