Back in 2018, Moss, the delightful little puzzle platformer with players guiding and controlling a mouse through an adventure, did exponential work for the VR scene. Launching at first on the original PSVR proved that titles on the growing platform could be much more than just taking a known formula and translating them to more immersive first-person perspectives. Immersion can also come as an on-looker to the world around yourself and the character, manipulating objects around you to progress. That’s what the magic of Moss is. Four years later, a follow-up has arrived in Moss Book II, not only recapturing that charm but also taking it one little step further.

Moss Book II kicks off immediately where its predecessor ended. You’re in the perspective of an entity capable of shifting the world around you, diegetically labelled as the Reader. Quill is our furry mouse hero once more. Traversing through a dilapidated castle, and jumping in and out of portals, Quill’s journey is all about finding the use of her powerful crystals, known as Glass, in hopes to stop the Arcane. Ever looming is a big, menacing owl.

The original Moss was all about the journey to the castle, providing various environments to encapsulate the adventure. With that, it’s hard to envision where Book II could exactly go. Thankfully, the follow-up didn’t take long to justify itself and was just as stacked with things to do and explore, all under a tight five-hour runtime. Other VR titles have proved to be too much of a time commitment, I’m glad this wasn’t the case for Moss Book II.

Across your journey, Quill will find a few allies and many a foe. If you’re at all familiar with the original entry, you’ll be unsurprised to learn that Moss Book II is a story that will tug on the old heart strings. Trials and tribulations await in this very Zelda-esque journey. While there’s little to spoil, plenty of the fun is in this journey alone. Treks through snowy mountains, deep dark lava-filled dungeons occupied by a Warden, and the ominous halls of the crumbling castle all make for memorable setpieces and environments to explore.

Between chapters, you’ll find yourself in a big library alone, flipping through an old book. These are your cutscenes. As you move between pages, gorgeous artwork will fill up the blank space, while a narrator runs through the story, expositing. When the narrative reaches a boiling point, high in tension, players will notice the library walls around them will be even more in disarray than prior. Small, clever environmental details like this do well to not only maintain but also heighten the investment. 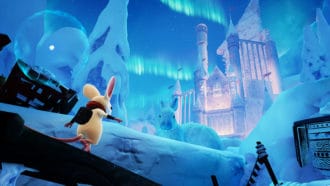 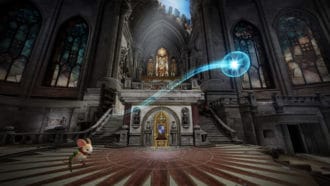 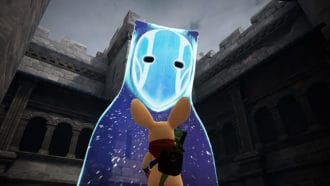 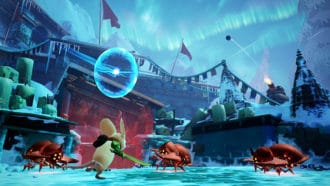 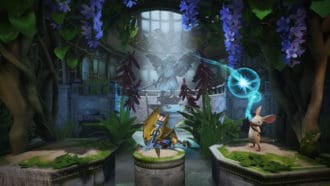 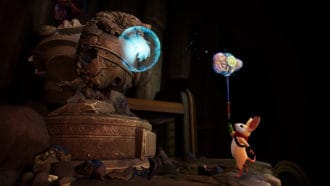 In both play and vibes, Moss Book II is one of the most comfortable VR games I’ve played. The gameplay is paced precisely how it needs to be. Having a pulled-back perspective, with the environments free to be explored both as Quill and through your own examination is advantageous. Combat is never too fast, unwieldy, or even strenuous. Everything you see, save for some sneaky crevices for collectibles, is clear and readable. Navigating that very world is just as simple. If players have prior experience with adventure games and how they play, anyone can pick this up.

Combat is also more of the focus this time around. Your fuzzy friend has more tools under their belt than just the grass sword. A throwing disc that can boomerang back to you and a heavy-hitting hammer make up two other items in Quill’s arsenal. All three of these weapons have an alternate attack type too; the sword with a powerful dash to mow down foes, a stronger version of the disc that can get lodged on surfaces, and a heavier attack with the hammer. To trigger all these, players must hold the attack button and Quill will hold that weapon in the air. Touch that weapon with one of your glowing diegetic wisp cursors and presto. What I also like here is that these will play just as crucial a part in the puzzle-solving. Close a platforming gap with your dash here, triggering that pressure pad with a heavy hammer hit there… it all comes together.

Rounding this out are optional armour sets you can find throughout the world of Moss. You’re never really clear how much these protect you exactly – no stats are displayed. Still, they provide adorable customisation and extra protection for the many, many combat arenas you’ll find yourself in.

“In both play and vibes, Moss Book II is one of the most comfortable VR games I’ve played.”

Interactivity throughout levels will also be crucial in puzzle solving. Thankfully, they aren’t all that confounding. They largely boil down to moving a platform or box for Quill to step on with one of your cursors. Alternatively, your throwing disc can be used against far away nodes or objects to unlock things previously gated away. However, a little way into the game you’ll obtain the ability to revive dead vines for vertical traversal or create bridges with shrubbery. This takes place in a leg of the game that sees Quill exploring a forest at twilight.

This feeling of adventure and approachability never lets up in Moss Book II. A lot of that is thanks to the team at Polyarc knowing just the right amount to expand on ideas and mechanics. Where the other strength comes in is its looks.

Moss Book II is once more a wondrous adventure that feels like an exploration of sets or picture books. Being an on-looker means you get to see every minute detail of each scene you’re in. It’s easy to fall in love indelibly with each environment. The refinery that drips with lava, the snowy mountainscape, and the cautious delve through the castle, each area does well in painting the picture of a memorable and trying adventure from the lowest lows to the highest highs.

Moss Book II is available now on PSVR and, most recently, Meta Quest II. It’s a thrilling follow-up adventure and one well worth checking out. For other VR Corner features, head here.