Cursed to Golf makes for a difficult but charming roguelike

Cursed to Golf is the newest roguelike (more like golf-like) to grace your gaming space. From Chuhai Labs, this dungeon crawler has you playing 80+holes to get out of Purgatory and to save your soul. You play as The Cursed Golfer, a pro golfer who’s trapped in Purgatory after a freak lightning accident. To get back to the land of the living, and win that all-important golfing tournament, you’ll have to play across various courses in Golf Purgatory. This includes battling against golfing bosses (who also help you throughout each level) in a redemption for the ages. Is Cursed to Golf the latest and greatest in the dungeon crawler/roguelike genre, or will it end up in Golf Purgatory to live out its days on a never-ending course?

Throughout Cursed to Golf, you must battle in 18 procedurally generated holes so you can come out on top. You begin the actual game with 5 strokes but as you zoom out you begin to notice that this hole will take more than five strokes. Throughout the round there are idols scattered along the course, silver idols give you 2 extra shots and gold will give you four. These will come in handy! You also begin with 7 Ace Cards, these cards give you unique power ups throughout the game. They can include practice shots, mulligans, and the ability to blow up TNT among others. Each hole offers different obstacles, like being in the bunker where you can only use a wedge club. It’s up to you to figure out how to get around them.

Everytime you finish a hole, you’ll get money based off of the amount of strokes leftover. You can spend these on Ace Cards, and when you leave the hole it’ll get marked with a ‘Holed Out’ sign — meaning you can’t go back and play it again. Some areas might offer you money or cards. There’s a chance to visit the Eterni-Tee so you can buy more cards, change your outfit, and more. There are also checkpoints where you choose either left or right. Sometimes you’ll get money, or cards, or another hole to tee off at. There could be the opportunity to visit a cursed hole. Cursed holes are regular holes, except with each shot you get closer and closer to a curse. They might include only hitting right for 2 turns, or no idols for 3. It’s a fun challenge to break up the standard ruleset. 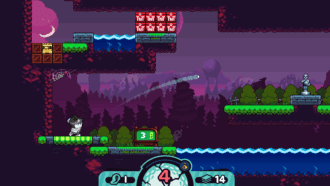 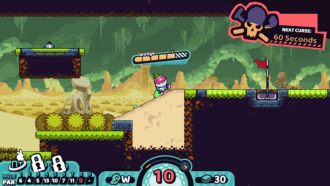 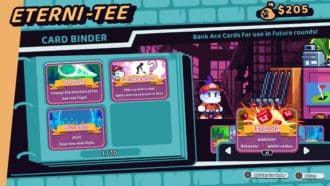 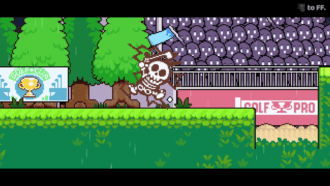 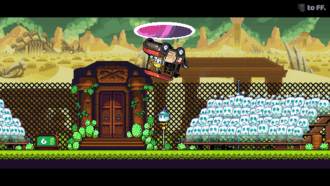 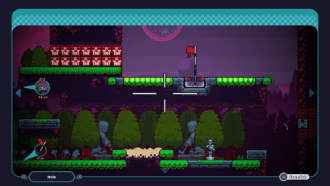 Whack down the fairway

After four or five holes you’ll meet the boss of the level. The first boss is The Scotsman, who when falling into Purgatory helps you understand your surroundings. He explains that after this hole is a new realm called The Oasis, each area or realm has a unique boss and an aesthetic or vibe. They also have their own terrain and obstacles for you to get around. During the boss battle, not only do you get the regular shot idols, there’s another unique idol called the stun idols, these allow you to hit them and stun the boss for one turn. If you do manage to hit two in one round, you will stun the boss for two rounds.

The game is challenging, it’s really challenging. There’s a massive learning curve to this, but Cursed to Golf isn’t forgiving and there can be issues. First, there are no accessibility options. Subtitles are already applied, we don’t get to change size or even font. There’s no colour blind mode, and even the ability to remap keys or check to see what buttons do what is limited or non-existent. While playing, you can rotate the ball if you mash a certain button, but there’s no ability to change it to a hold press. This sucks for people who find repetitive taps hard on their hands. When you use an Ace Card, some cards will remind you of what button to press, others won’t. Thus, some cards end up getting wasted because you don’t check (or assume that the info will be there).

Golf is an easy game… it’s just hard to play

“Difficult games are difficult for a reason, but more accessibility options doesn’t necessarily make it easier for people who need it”

If you lose, it’s game over and you have to go back to the start of the course, you even lose the cards and money you’ve obtained. This can make players try to push themselves to get better and better, but for others, it can be disheartening. Difficult games are difficult for a reason, but more accessibility options doesn’t necessarily make it easier for people who need it. I appreciate Cursed to Golf in its approach to this genre, but having accessibility tools in this game can bring so many new faces to the genre and the title.

The art style is pretty, it has that 16-bit pixelated feel to it, but with bright colours. The colours of the different areas bring you into the aesthetic it’s trying to evoke. Even the art of the characters when they’re not in their pixelated version are pretty distinct too. When it comes down to it, it feels crisp. I love the fact that I can customise the Cursed Golfer to whatever I feel fit, and it’s nice that they don’t cost anything. There are even some nods to famous characters in the outfit customisation too. The sound is great, it gets you in the mood to play a weird game of golf. Yet, when you fast forward through, it’s dead silent except for a few chirps. This isn’t a bad thing, but I’m surprised that there’s not even the sound of a sped-up VHS to show you’re fast-forwarding something.

Couldn’t putt it down

There aren’t any big game breaking bugs, but, there is one large annoying bug that’s more frustrating. During the boss battle against the Scotsman, towards the end of the map he might… jump to a new area for some reason? After you watch him hit the ball and it lands, then you take your turn. If you haven’t stunned him, it’ll be his turn now and instead of hitting from the area the ball landed, it’ll jump to a nearby area and he tees off from there. This became an issue that I thought would happen once, but it would happen pretty consistently.

This can be discouraging for players who find this a challenge, as they lose the game and have to start from the beginning again. Cursed to Golf does allow you to skip holes, which is great to see, but you miss out on cards, money, even going to the shop. So it doesn’t feel worth it to skip them at all. Cursed to Golf is an awesome concept, as it adds its own twist to the genre. But I hope future updates, including accessibility updates, can shape this game into something people keep coming back to for more. It’s a great title to have in your library if you like the thrill. Cursed to Golf is available now on Nintendo Switch, PlayStation 4/5, Xbox One/Series X|S and PC.