Plaion (formerly Koch Media) have been picking up endless titles in recent memory. These vary from remasters of beloved platformers based on popular cartoons to things more on the horrific and challenging scale, like the Lovecraft-inspired Dolmen. Largely, this is thanks to Plaion’s monolithic parent company, Embracer Group. Warlander, a freshly announced PvP multiplayer game on a medieval battlefield, is but the latest example.

Ahead of the reveal of Warlander, we got to experience some hands-on time with the game. Coming out of it, it shows great promise and could likely be a viable go-to multiplayer affair for your squad, provided a few needed fixes come.

In my hands-on period, I more or less got free range of the 1v1 army battle with a total of 40 players. This mode boils down to the goal of ultimate dominance on a given battlefield. The way this is achieved is via capturing points, making gradual progression to the storming of a final crucial area, the heart of an army’s keep. All around you riotous warfare is taking place. Swords will clink as they clash against armour. Sparks of lightning, fire or other magical projectiles will erupt through forces. Rock walls can rise from the ground, adding to or removing the gap between yourself and your foes. The question remains: Will you be victorious?

Warlander actually isn’t the first medieval-based multiplayer affair to come from Plaion. Chivalry 2 was quite a hit when it debuted just last year. The difference here is that the new kid on the block is in the third person perspective and offers more play variety. Where its counterpart is more chaotic in nature, Warlander is less bloody and grim, though comes with the requirement of some tactical thinking on the fly.

Three classes are available for play, which is where the tactics and play variety stem from. These classes are the healer class Cleric, the spell weaving Mage, and the brutish steel-clad Warrior. My favourite of the bunch was actually the Mage, largely just because it’s an enticing refresher from the usual gritty builds we’ve come to know. The abilities provided for the Mage allow for good agility. An area of effect attack is of course good crowd control but the barrage ability that lets loose to a rapid fire of magical projectiles really packs a punch. If all else, the teleporting jump can allow for a quick escape when things get hairy.

“Trebuchets, ballistas and the likes will make a good dent in the foes’ defence. These are joyous and explosive in their devastation.”

On top of this, trebuchets, ballistas and the likes will make a good dent in the foes’ defence. These are joyous and explosive in their devastation. In my very first match, I stepped onto some castle high walls. Arrows flew just by my head, fiery boulders destroyed allies right in front of me. This does well in immersing oneself in the devastating battle taking place.

Similarly, the map on offer brings many branching paths and verticality to provide different approaches. Gates and barricades can be taken by force or by tools such as battering rams, creating a path ahead but also new choke points. Good ground can also be covered by paying attention to and sneaking through some of the lesser surveyed channels.

The 100-player 5 army mode, which I’ve yet to play, looks to also add another spanner in the works to this formula. It’s been said that more unique mechanics will take place here. What is promised is the ability to temporarily form an alliance with the enemy teams only to later backstab them and tilt the scales in your favour. That’s an exciting idea but not yet known what that will look like, nor is it proven. 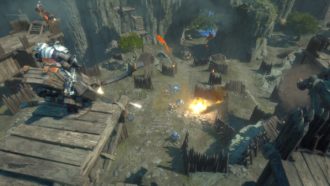 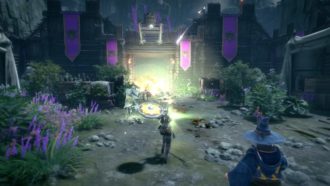 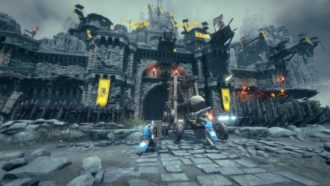 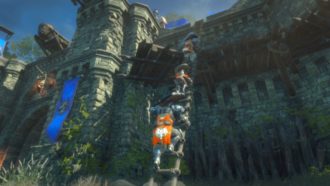 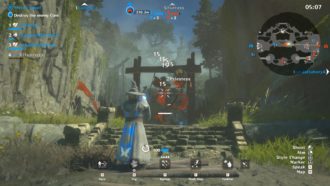 If I were to give a critique to Warlander thus far, it’d be the game’s need to distinguish itself that little bit more, and also the tidying up and clarifying of some mechanics. Right around the corner from its Open Beta launch, it already has better footing than giants such as Ubisoft’s For Honor initially had. Plenty more breaching and a variety of play options are available. However, a little more memorable flair and character design would go a long way.

Even just further clarity and less jumbled customisation and build mechanics too would help. Players are restricted to these three classes in-game, however, you can create a deck of sorts with these. Higher level instances of a Warrior for example could mean better armour and more health. That goes a little further with the passive perks available through weaponry and the title system. However to achieve such better stats you have to level up what’s described as Valor. There’s permanent Valor that applies to a given character in and outside of matches, then there’s the Valor earned in and limited to the heat of battle. The Valor that’s earned here through basic play stacks and will eventually let you spawn in as your higher Valor characters, causing more devastation. It’s confusing and a whole thing, evidently.

Each of the classes can be customised (be that dyeing and altering of hair and clothing, changing emblems on your amour, etc) so that you grow further attached. There’s an appeal in that but it’s at ends with the other Valor mechanic. Combine this with the fact you can have dozens of instances of each class, without the ability to name a class instance (outside of the preset earned titles) and it’s entirely believable that distinguishing each of your heroes will be difficult. A quick and happy resolution to this is just to make one class instance, with the ability to equip different load-outs.

Warlander is being developed by Toylogic and published by Plaion. For now, it’s just set to be a PC release, but console versions (and crossplay) are in talks. Players can jump into the Open Beta period on Steam as of September 12. It will be free to play and thankfully, reportedly not a pay-to-win experience. Those looking for a fun, axe-wielding time should check it out.