We spoke with Gearbox about New Tales from the Borderlands

Announced earlier this year, an extended gameplay footage and character trailer has just been released for New Tales from the Borderlands. Checkpoint Gaming had the opportunity to see these clips in advance and talk to two of the game’s developers, Director of Production, James Lopez and Head of Writing, Lin Joyce both from Gearbox Software before both the gameplay and trailer were released during the Gearbox Showcase at PAX West. Here’s everything we know about this new addition to the Borderlands universe!

The choice-based narrative adventure, New Tales from the Borderlands is, as Head of Writing Lin Joyce states, a “spiritual successor” to the 2014 Tales from the Borderlands that was loved by critics and fans alike. Though the original studio that developed the series, Telltale Games, are no more, new developers, Gearbox Software, have brought aboard key alumni from the Telltale games narrative team. The released footage delved not only into the new narrative created by this team, but three new characters that have big personalities and their own unique objectives.

The three characters are Anu, scientist and humanitarian, her brother Octavio, a young man lusting for fame and fortune, and Fran, the owner of a recently destroyed frogurt shop hell bent on making the person who wrecked her business pay. The eighteen minute clip shows the trio making their way through the guarded sewers of Promethea on the hunt for a vault full of riches. The gameplay demo shows how the three interact and react when faced with life-altering decisions, highlighting the importance of the choices you make in the game.

“…Gearbox just wants people to play the game and have fun.”

Director of Production, James Lopez discussed how their aim was for choices to “flow and feel natural” for the player. Choices can either lead to success, a soft fail which will lead to a player becoming injured, and a hard fail, such as a death, which means that you will have to start from the last checkpoint.

New Tales from the Borderlands also includes the use of Quick Time Events that when you succeed or fail will also lead to a different narrative outcome. For players who don’t pride themselves on their reaction speed never fear, the game will have an accessibility feature that will let you dial down the reaction time. Lopez states this is because Gearbox “…just wants people to play the game and have fun.” The gameplay does make the game look like a hell of a lot of fun and part of that is due to the game’s visuals. It has the comic-book style of the mainstream titles and for the first time in any Borderlands games, performance capture and facial mapping technology have been used. 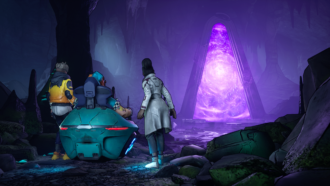 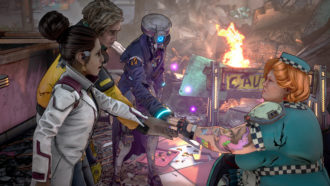 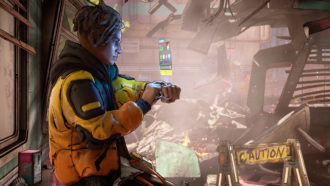 Another aspect of gameplay that was shown was one of the several mini games that will be found within the New Tales world. Each character, Lopez said, will have their own unique mini game prescribed to them. In the demo, we see Octavio’s mini game which is a collectible figurine fighting game entitled “Vaultlanders.” Throughout your journey through Promethea you will find and win these collectibles that are fashioned off famous Borderland characters. These figurines have unique statistics and special moves and focus on two main abilities – Attack and Defence. In the demo we see Octavio use his Amara action figure which has much higher Attack stats than the enemies’ Zane figurine. Therefore, Octavio wins the battle and also his opponent’s figurine.

“…the ‘stakes are high’ for each of the three protagonists.”

Narrative wise, the gameplay footage contains a lot of the famous Borderland humour along with the theme of friendship and a realistic comradeship between all three characters. Though the game does have a lot of humorous aspects, Lopez explained that the end of the game has “serious” elements where the “stakes are high” for each of the three protagonists.

One of the main experiences that Joyce hopes players will have with the game is “…to experience the unconditional love (between the characters) and what it means to love someone completely, even when they make bad choices.” When I commented on the obvious fondness they both have for these three characters, they both smiled warmly agreeing that they do indeed have a lot of love for them. “We’ve spent the last two years with these characters” Lopez stated, “we do care for them very much.”

New Tales from the Borderlands with be released on the 21st of October, 2022 for PlayStation 4, PlayStation 5, Nintendo Switch, Xbox Series X/S, Xbox One and PC.