“Working 9 to 5, what a way to make a slayin'” Sorry, didn’t see you there! I was just bowing down to capitalism. What’s that? Capitalism is evil and exploitative of the working class in order to line the pockets of the 1%? NO WAY! Don’t worry, Box Knight is a pretty epic meta-narrative about fighting back against toxic workplaces where the goal is to kill the CEO and save the office from itself! Go on break and check the trailer out below!

A roguelike set in an office certainly wasn’t on my dance card for PAX Aus 2022, yet here we are! Box Knight is a thrilling beat ’em up dungeon crawler that feels like you’re the last hope for your office that’s fallen into dark times. Wield a sword and climb the many floors in this randomly generated hijinks fit for any water cooler warrior.

Coming from the folks over at We Made A Thing Studios in Adelaide, Box Knight is a capitalism fanboy’s worst nightmare. Knight… mare. I was lucky enough to jump into the demo and it certainly has all the makings of a good roguelike. As an added bonus, the office setting works in its favor. Who hasn’t wanted to pull out a giant sword and slash away the deadlines? Box Knight is as much a commentary as it is a fun hack-and-slash. Much of the message the game gives the player isn’t as intrusive as it might seem, if anything it plays into the game’s comedy. Dying just means the next run takes place a week later, on the next beerless Friday!

“…fight the CEO who brought this curse down everyone after banning Friday night beers.”

At PAX Aus I was lucky enough to talk with Jeremy Kelly-Bakker who gave me the low down on Box Knight. “You, the box knight are the self-appointed head of company culture have taken it upon yourself to quest every Friday night at 5pm to fight manifestations of everyone’s workplace misery and depression.” says Jeremy. “The goal is to find and destroy all of these fantastical abstractions of all your most terrible and toxic co-workers and eventually wind your way up to the top of the tower to fight the CEO who brought this curse down on everyone after banning Friday night beers.”

We Made A Thing Studios are known predominantly for their work in digital content creation, with the idea for Box Knight coming during the pandemic when other work had dried up. Now Box Knight is their passion project that they continue in-between other media projects the studio is responsible for. 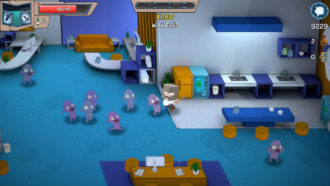 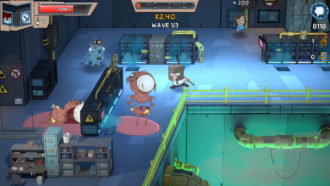 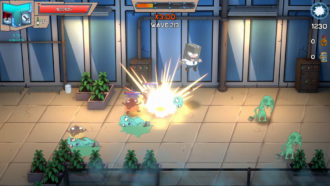 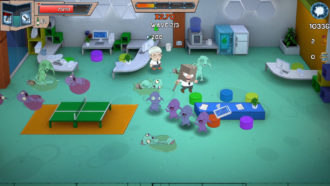 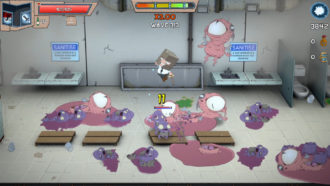 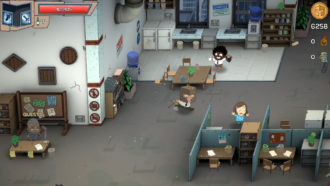 It’s quite a cutting commentary of the desk job life that I think also is quite cathartic. Who hasn’t worked in a job with a boss or coworker who’s gone above and beyond to make your life hell? My time with Box Knight was radical. Roguelikes are taking over these days but seeing one that takes place in an office, full of tongue-in-cheek humor was appreciated by me. Fighting my way up to kill the CEO sounds like a pretty rad Friday night.

The game also features a diverse character creator which will be further expanded in the full game and players will have access to many different helmets, uniforms, and weapons to take on the office baddies in style.

Box Knight isn’t out yet, but you can play a demo on Steam here. The team plans to release the game in mid-2023 on PC. This one went straight on my wishlist after playing… and hopefully, maybe I’ll have it on the Nintendo Switch one day soon after launch!