Sigil of the Magi is a fantastical yet simplistic spin on the roguelike deckbuilding formula. Currently playable only in early access, it’s a sprite-based affair where turn-based tactics come into play. With this, character placement is just as crucial as the provided deck. What comes out of it all is a tough roguelike experience with a charming art style and already a good blueprint of what’s to come.

Sigil of the Magi, like many forays in the genre, is light on story. You are a band of adventurers. You must gather up a deck and use this as your arsenal of attacks against many opponents across many battlefields. Good luck. However, there is a bit of picking and choosing to suit your playstyle. You can choose up to three characters, whether that’s picking one of the two factions or mixing and matching from the two to create your own dream team.

Making up this party DNA can include a wizard, rogue, bounty hunter, knight and more. Each has its own set of cards that can be purchased or discovered out on your journey and it’s in being this well-rounded that you’ll have more of a fighting chance. My wizard became an MVP, issuing out cards with spells that can drain health and debuff foes, every so often performing a powerful cone area of effect attack. Meanwhile, an archer was apt at dealing with those farther out on the battlefield, using their knockback ability whenever they edged closer.

Sigil of the Magi feels like an intriguing mesh of Slay the Spire and Into the Breach. I mean that in the best way. The isometric battlefields provide tense fights of push and pull for control. At any moment the tide can turn in anyone’s favour. These fights take place on minimalistic plains. Verticality, at least in the two worlds I’ve experienced, is not considered. It’s all back to basics. Though there’s enough to give you that extra nudge. The first world, featuring very grassy environments, offers extra shielding when characters are placed on tiles with bushes. Juxtaposing this, tiles with acidic mushrooms or water puddles can in turn poison or weaken you.

The big gimmick that sets Sigil of the Magi apart from the rest is that players can bank their cards on a tray slot in order to save for later use. This costs Mana (the game’s equivalent of Action Points, determining what card can be played at any time), sure, but I quickly learned that sometimes the best play isn’t the most obvious one. Sometimes it’s worth making more of a modest turn, playing only one damage card then banking others while you wait for your stronger cards to be redrawn and come into play. 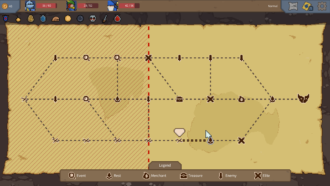 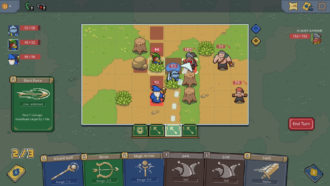 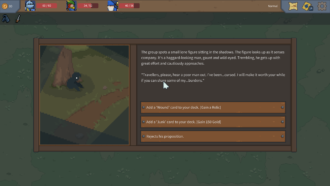 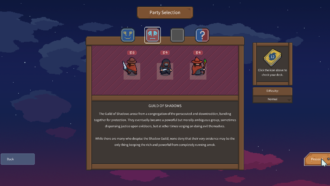 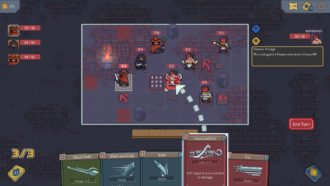 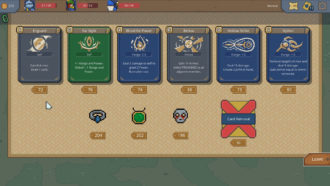 One example of this is that when playing certain powerful cards you may be randomly dealt junk cards that have no use other than to fill up your deck. Banking these cards can be a good way to free up your deck so that nuisance is done with. Combine this with, say, a card that adds more damage to attack the more cards you have banked, and soon you’ll have some pretty sweet ways to really dole out some damage. Across your course, relics will also be collected, serving as vital passive boosts and buffs to your attacks and the ways you play.

The Sigil of the Magi also captures that feeling of strategising the paths and routes you’ll take well. In-between levels you’ll have that stock standard lined map where if you choose to go one option down a path, you may be forced through some tougher fights before finally surfacing through to a shop or campfire to rest or heal up. Random event spaces on the map will serve as a reprieve where players can maybe make some decent coin and pick up a few cards, potentially free of charge.

It’s quite a tough experience so far. With a handful of hours under my belt, I’ve made it to the end of the second world, only to be cruelly defeated by an ever-powerful mage that can duplicate themselves and quickly overwhelm you. There’s a bit of progression in-game as it will take a bit of time until the Guild of Shadows, the second unlockable faction thus far, is unlocked via play. Similarly, more cards can be added to the pool of discoverability. Though largely, like many in the genre prior, its concessions are small, encouraging the player to stick at it, beating their head against a will a bit until they find the one miracle run that will see them through to their journey’s end.

“…The isometric battlefields provide tense fights of push and pull for control. At any moment the tide can turn in anyone’s favour.”

Topping off the experience is an effective pixel-based art structure. The characters’ sprites aren’t too ambitious, remaining very to the point. A knight and archer are exactly what you’d expect them to look like. This is stock standard to an effective degree, reminding me of the artful but concise simplicity of the very original Dragon Quest sprite work.

Similarly, the game’s music also provides a sense of fantastical adventure. The menu theme is incredibly enchanting, calming and welcoming that it’s almost tempting to just sit there and listen to it for a while. The battle music feels incredibly ramped up compared to this, serving as triumphant backing, encouraging you to push through to victory.

If you’re after a new roguelike deckbuilding experience to get stuck into, you’re in safe hands with Sigil of the Magi. Simply put, the core gameplay loop and challenge that comes with this, along with a good gimmick makes this a title already worth investing in. Short of adding more content to flesh it out to a longer experience ahead of its current 3 worlds and adding some style to some of that placeholder text found so far, not much more is needed to better the experience.

Sigil of the Magi is available now on Steam as part of Early Access. Check it out.