SpongeBob SquarePants as a franchise is still going strong more than 20 years after its first episode. To this day, in the video game space, we’re even seeing remasters of some of its iconic titles. While definitely a program of my childhood era, it somewhat passed me by. However, playing an early glimpse of the brand new SpongeBob SquarePants: The Cosmic Shake at Plaion’s Spring showcase unearthed memorable remnants situated somewhere in the back of my mind. It’s in this preview and this unearthing that I suddenly became excited about a new SpongeBob game.

SpongeBob SquarePants: The Cosmic Shake follows an interdimensional travel escapade for the ages. With Patrick and, undoubtedly many more of our spongey heroes’ friends in tow, I can only imagine it’ll be a head trip for fans.

The hands-on I got had a spaghetti western setting, known as The Wild West Jellyfish Fields. SpongeBob is introduced to Mr. Krabs, head to toe in a western cowboy getup. Only, SpongeBob doesn’t appear to remember Mr. Krabs. The figure is labelled as a stranger. Additionally, Patrick appeared at my side throughout the gameplay slice, lingering as a small inflatable friend, rather than an interactable companion or NPC. It’s then that weird curiosity followed.

Wandering about The Wild West Jellyfish Fields, classic SpongeBob iconography is everywhere you turn. Jellyfish remains that ever so familiar pastel pink. SpongeBob will let out his occasionally charming (but mostly annoying) laugh. His feet squeak and there’s a pep in his step. Meanwhile, nautical fauna populates the environment.

Around about then is when those occasional memories of catching sporadic episodes (and playing a lot of Revenge Of The Flying Dutchman on PS2) kicked in. That welcoming and catchy music that played throughout, along with the sights and feeling of platforming joy, felt like home.

The Cosmic Shake is a platformer with light combat elements. A dedicated dodge button added the welcome flair of instead being a cartwheel – handy for avoiding hits but also to sprinkle in with the movement. This too felt well meshed with the spin attack and punches SpongeBob can doll out, transitioning quite seamlessly to these animations rather than with a moment’s hesitation. Also at your disposal is a handy bubble blower, activated by a bumper button press. Not only can this suspend enemies briefly to give you more breathing room, but I also found an instance where this inflated an object to become a bonus platform to navigate across. 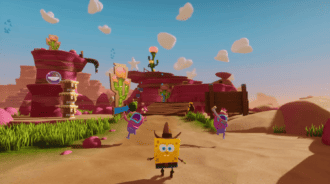 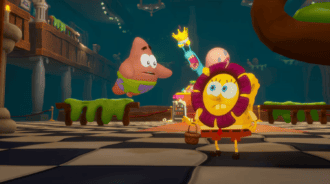 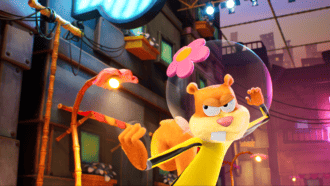 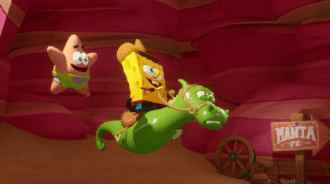 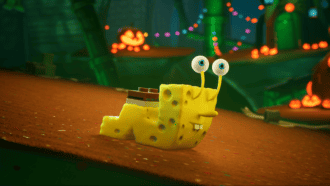 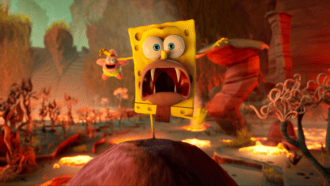 Ensuing in my time with the game were hints of a collectathon. Throughout remained various destructibles, goodies to collect, and a primary task of milking all the cacti in the region to give to the scheming money-hungry stranger.

All in all, SpongeBob SquarePants: The Cosmic Shake is joyous to play so far. SpongeBob feels, well, spongey. Jumping and gliding between sand bank platforms, finding hidden jokes, and hitting switches all provided some of that charming 90’s-2000s platformer fix we’ve been missing these days. If all else, it’s good to see licensed video games still releasing with at least the slightest bit of creativity and charm they used to.

SpongeBob SquarePants: The Cosmic Shake release date is currently labelled as coming soon. In the meantime, check out some of the other Plaion games we spent some time with, including the colourful Horse Tales: Emerald Valley Ranch.