Gungrave G.O.R.E is a riotous game all about the power fantasy. Controlling a schlocky 2000’s era badass protagonist named Grave, it’s a character action game all about erupting into a ballet of bullets and swinging your weight around in style. With the release just a few weeks away, we found the time to get some hands-on, and even chat with some of the lovely folk at the development team Iggymob. Stepping away, I can’t wait to get my hands on this action-packed release.

My hands-on time with the game was situated at an industrial facility by the seaside. Early on the experience oozes with style. In an opening cinematic cutscene, a coffin comes falling out of the sky, burning hot from the atmosphere. Launching out of it as it reaches the docks is our hero Grave, quickly snapping a thug’s neck before dispatching everyone else, leaving a sizable shotgun hole in the last foe. It’s this level of slick and stylised but detailed gore that feels incredibly anime.

Inspirations don’t end there. Chatting with Gungrave G.O.R.E Director Kay Kim and Project Manager Bobby J.Park, they also cite inspiration in the 2002 action-revenge Christian Bale flick Equilibrium. Those links and threads were evident very early on in my gameplay time. Both feature near-future dystopic settings with anti-heroes being the main driving force. Both are revenge stories and both are incredibly dedicated to providing the audience with cool choreography and setpieces that leave an impact.

Gungrave G.O.R.E delivers just that thus far. Deflecting missiles back at militant forces with the swing of an oversized gun, dancing and pirouetting as you target all enemies in your immediate vicinity, killer takedowns… all the combat staples are there. Set in the fictional land of Scumland, gritty cyberpunk visuals are also provided throughout. Neon lights and technology collide with mankind. Though your adventure will also take you to Vietnam, Cambodia, Hong Kong, Singapore, and Malaysia. UI is incredibly 2000s in design, featuring clear gauges while a skull and compass for map orientation are situated in the top left corner. An objective early on in the mission pops up, simply reading ‘Kick their ass.’

That 2000s edge captured this time around in the Unreal Engine feels like no time has passed, sitting comfortably among the crowd of character-led action games like Devil May Cry. Gungrave G.O.R.E is a sequel to both the 2002 PlayStation 2 game Gungrave and its ’04 sequel Gungrave: Overdose. That comfortable nature of continuing that era won’t be for everyone all these years later. However, those like myself that are all about it will be thrilled to know it’s going to go all in. Just some of that is in the scoring talent on board. Tetsuya Shibata is a composer who has done some significant work on Devil May Cry 2 through 4. Yoshino Aoki, like Shibata, has music credits on Final Fantasy XV. 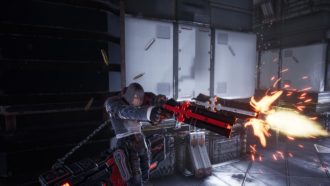 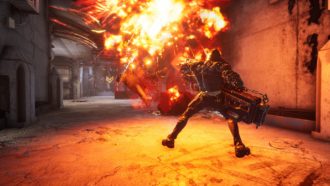 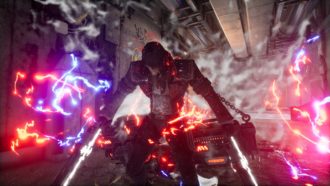 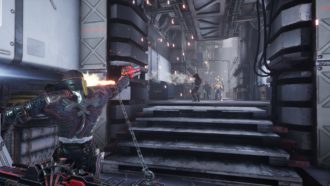 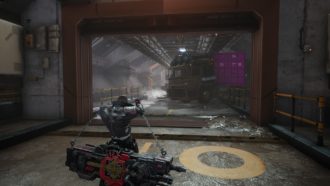 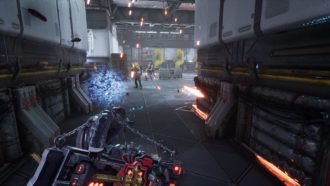 As is commonplace for games of Gungrave G.O.R.E’s ilk, players will be working to keep a combo going to maximise their score in a given mission. It’s a different world from 2002, where players can now more easily form communities for games, sharing scores online. Kim and Park both commented on their hopes for this, stating, “If we get a lot of love, I’m sure communities will be there to share their scores.”

What I found particularly interesting about the demo is that Grave felt a lot more weighty to play than examples such as Bayonetta. There’s your slick posing and waving about of arms as you aim dual-wielded pistols around the screen, coming off as a dance. However, melee is more of a tougher beast. Grave is built stocky, more like a character ripped right out of Gears of War, and not as lean and athletic in nature. This means I had to throw my weight around a little more. Equipped at my back and able to swap to at any time is this incredibly heavy gun that can be used in firing off more powerful munitions and to whale on enemies.

I asked the pair about this different feeling and they assure me that this will actually see some reworking come the final game. More final animations are to come, something I’m pleased to hear even considering the good footing Gungrave G.O.R.E already has. Instead of all the character action game comparisons that ran throughout my hands-on time (and still do), Kay Kim actually likened the combat to a Soulslike in the learnings on offer. “New shooting mechanics are added,” he says. The combat as a whole? It “accommodates many skills without too much effort.” What exactly these comparisons mean I don’t yet know. However, I’m certainly excited to learn it looks to be a lot deeper than it already suggests. It’s also been teased that other playable characters will pop up throughout the campaign. Something I’m yet to see but that of which I imagine has keen fans’ brains bursting with ideas and potential.

My hands-on experience with Gungrave G.O.R.E closed with an explosive battle with a giant mech. As trailers and marketing may suggest, there’s a diverse set of bosses on offer. I’m excited to see these in action. Some bosses will become revised versions. The narrative explanation for this? Something as silly and pulpy as a said boss returning and injecting themself with a serum to become stronger. I prodded on this a little further and learned it looks to be a little more than just an identical fight. “New instances will feel like you’re fighting a new boss with new patterns,” explains Park and Kim.

Looking quite stylish and anime as all hell, Gungrave G.O.R.E is now a game high on my priority to check out before the year’s up. Thankfully the wait isn’t that much longer. Gungrave G.O.R.E releases on PlayStation 4 & 5, Xbox One, Xbox Series X|S and PC on November 22. I hope it’s everything returning fans want while bringing in those new like myself.

For more coverage from our attendance at the recent Plaion Spring Showcase event, why not check out our hands-on with the hotly anticipated Dead Island 2?