Three years ago, you may recall the reveal of a bizarre adventure game named I Am Jesus Christ. Following the fabled story of the Son of God, the project looked highly ambitious and baffling. The Steam listing for the page entails your journey across the New Testament stories will include feats of meeting up to “over 60 characters” and performing over 30 miracles. With a planned release date of Q2 2023 and a fresh prologue to play for the experience, I had to jump in. What better an experience for a trans woman to jump in than a Christ simulator?

I Am Jesus Christ: Prologue has a lot of quick jumping between different historic events in Jesus’ life. Being incredibly cutscene-heavy, generic music you’d find in a documentary backs these telling’s and introductions to these very moments. These recordings, like much of the dialogue in-game, are of varying quality. Incredibly muffled line deliveries come out of some, and limited subtitles don’t provide any aid in understanding.

Across the game’s six provided chapters thus far, you’ll get a weird blend of incredibly rail-roaded moments and those that let you roam around with little to do. Jesus’ village where he grew up and lived with his mother Mary (also present in-game, to unnerving effect), seasides, deserts and more is where you’ll be spending most of your time. You’re said to meet the twelve disciples and other important figures throughout the full I Am Jesus Christ experience, but thus far the only other individual you’ll meet other than no-name locals is John the Baptist.

Credit where credit’s due, the idea of a game following the Son of God is a good one. There are plenty of stories to follow and work with, whether you want to go the respectful and true-to-the-story route or parody. However, in the presentation and gameplay feel, the experience feels more like the latter. I’m also pretty sure that’s unintentional. As said, dialogue is a little stilted, but it’s also delivered by characters with low visual fidelity that have a bit of that dead behind-the-eyes look that you’d find in games such as The Elder Scrolls IV: Oblivion. A now sixteen-year-old game. 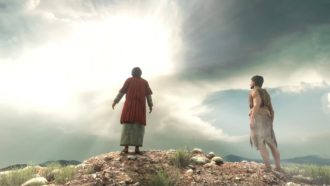 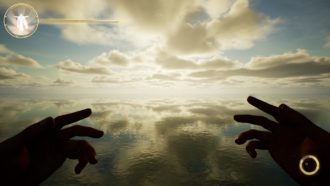 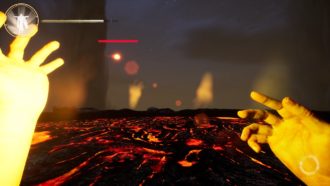 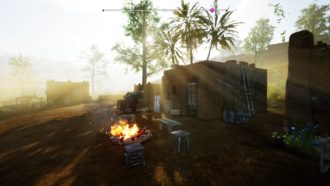 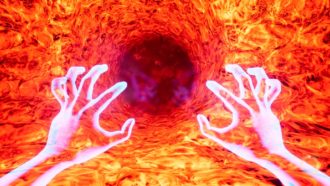 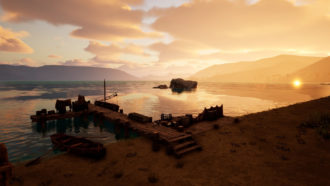 I Am Jesus Christ: Prologue retells some key stories such as the turning of water into wine and ensuring a fisher gets a bountiful harvest. Though it takes some bizarre liberties. One instance has Jesus healing a child, a known ability of his. However, the presentation of this is Christ astral projecting into the inside of the ill child, walking around their organs as cells pass by, The Magic Schoolbus style. Then, you visit focal points in these channels of organs, outstretching your hands to rid of the virus at these points. Meanwhile, the virus points look very similar to the cellular makeup of Covid-19. I’m not kidding.

You’ll also experience the story of Jesus going through forty days and forty nights of starvation in the desert. Topping off this trying moment is an FPS boss fight of Jesus fighting Satan (embodied by a glowing orb with a deep, demonic voice). Here, you use your godly powers to hold Satan in place, reflecting projectiles they send back at him. Telekinesis also becomes one of your abilities, something you don’t yet get to see in the prologue except for a tutorial that has you spawning in a box and floating it to the top of a pressure plate.

“…you’ll get a weird blend of incredibly rail-roaded moments and those that let you roam around with little to do.”

I grew up and was raised as a Catholic, though I must be rusty. I certainly don’t recall such stories in my teachings as a kid. It’s these examples and more that leave I Am Jesus Christ so far being an adventure that is something of a trainwreck. It’s messy, and in the heat of the moment incomprehensible. Though I can’t look away.

Another weird factor is that the cutscenes and gameplay always stray away from directly showing Jesus’ face, only showing occasional side-on views or shots that obscure the all-being hero. What this tells me is that the developer SimulaM doesn’t believe in a canonical appearance of Jesus.

Entirely bizarre and hard to believe it even exists, I Am Jesus Christ looks like it will be quite the game upon release next year. The prologue experience can be beaten in about an hour, but my experience tapered closer to two as I would often find myself exploring with such disbelief at the world. Why can I jump around on top of village buildings? Why is the world at times so open with nothing to do? Oh dear, why does that villager look like that?

The answers to these questions and many more still await. I Am Jesus Christ’s full release is slated for Q2 2022 on PC. I can confidently say it doesn’t look to be a good game, but it will surely be an interesting one. Here’s hoping it has mod support. I can only imagine the community would be wildly creative with inventions.

You can check out the game on Steam here.