An old-school adventure game has been reimagined in the modern era with Colossal Cave. This game is a classic recreation in every sense of the word, with the 1975 text adventure written by Will Crowther & Don Woods now visualised and released across major platforms including Meta Quest 2. Playing through the game, it’s instantly apparent what an opportunity this is. An opportunity to make the game that the fans of the original pictured in their heads all the way back in 1975. But does it hold up to the lofty standards of our collective imaginations? Maybe not.

Delving deep into an entangled and vast cave system, the game offers players the opportunity to explore non-linearly as they uncover the majesty of a world previously only described in text. The game is an adventure filled with magical interactions, fantasy creatures, and traditional adventure game puzzle logic as you attempt to figure out in what ways you can interact with the world. A claustrophobic cavern opens into a world of underground temples, dwarven mines, mazes, and more.

The game has Roberta Williams attached, famed adventure game creator credited with titles like King’s Quest and Phantasmagoria under her belt. With a name like that and a history cemented in adventure game classics, Colossal Cave really does have every piece of the puzzle it needs to be a huge hit for nostalgic fans or those interested in the adventure game genre. Yet without enough modern advancements, Colossal Cave instead simply proves why the genre had to progress, leaving players with a reminder of the tedium of classic adventure gaming more than the wonder.

The initial vibes when booting up Colossal Cave in VR is one of intrigue. It’s a bit of a step back into the past despite utilising the most recent of technological hardware advancements which makes for a fun juxtaposition. Then, as you explore the world and look around it, listening to the narrator describe the scene in front of you, it brings the prospect of deep storytelling and adventure. Interaction with the world is fairly simple. Movement comes from the analogue stick, no teleportation movement option is available unfortunately, and a toggle will swap between a look interaction and a physical interaction. Picking up objects, opening doors, climbing ladders, and using items from your inventory on objects within the environment are about the limit of your non-visual interactivity. Though it’s all a game like this needs.

“It’s a bit of a step back into the past despite utilising the most recent of technological hardware advancements which makes for a fun juxtaposition.”

At first, you forgive Colossal Cave’s rougher edges as you anticipate the great storytelling and wonder ahead. Although as things unfold, the rough edges and dated design decisions become a bit too unignorable.

Movement is painfully slow by default, though thankfully this can be increased in the options menu. A certain amount of moon logic is also in play, meaning you can’t always predict or rationalise the interactions. This of course forces you to play a trial-and-error game rather than a satisfying deduction game.

The non-linear exploration of the original text-based adventure would have also been a lot more forgivable back in the day. A line of dialogue separating you from backtracking is a much smaller ask than the actual act of walking back to a previous area. Don’t get me started on the tediousness of mazes that lead you around in circles. And when enemies popped out from nowhere in the text adventure, it would have been a lot more immersive than when an enemy literally appears out of thin air in front of you in the 2023 reimagining, simply to pop back into non-existence with a very basic animation 2 seconds later.

The problem with recreating a non-visual experience with visuals is that you’re battling against the expectation of people’s imagination. And Colossal Cave is colossally unimaginative in that regard, opting to recreate in the most basic way, rather than filling in those needed blanks. 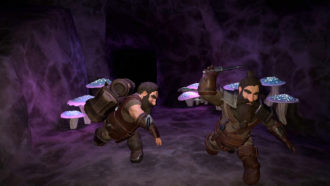 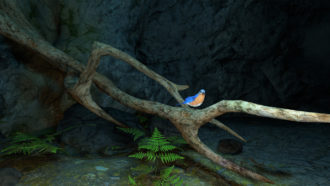 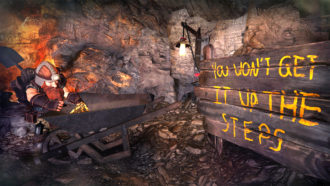 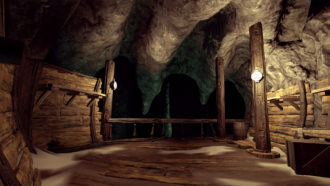 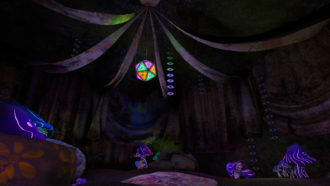 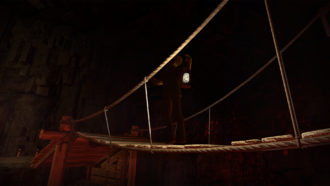 Surprisingly, Colossal Cave plays like an arcade experience as you battle for high scores rather than compete for completion. Inventory management comes into play as you juggle an item capacity system. You can’t pick up everything you find which leaves you making choices as to what you may or may not need. The problem with this is that if you choose to drop a key item needed later, you’re in for a good amount of backtracking to find where that item was dropped. It won’t be fun for a large population of the game’s players, though I can envisage a diehard fanbase who loves the juggling of items and environmental puzzles, taking physical notes about the world as they explore.

Score in the game is calculated with progression through the cave as well as through accumulated treasure. In a weird way, it means the game is kind of like a roguelike experience. If you die, which you can, you respawn right back at the start with an opportunity to continue or begin again. The first time this happened to me I was shocked. With no autosave feature, I found myself trekking back through the caverns and corridors to finally arrive back to where I was.

Colossal Cave isn’t a stylish affair. I can’t tell whether it’s held back by the vision of the original game, by the quality of the reimagining, or by the limitations of the Meta Quest 2. Possibly all three. But the game certainly could have made further strides to distinguish itself visually or audibly, doing just the expected amount but going no further.

It’s true that at the heart of Colossal Cave is still that beloved text adventure. No doubt the game will be a delight to a certain subset of gamer who gets to revel in the recreation. Although it simply lacks in a few too many ways for me to recommend this one to anyone other than a Colossal Cave devotee.