The Xbox One X is finally available for pre-order

It has felt like a long time coming, but the Xbox One X is finally available for pre-order ahead of its November 7th release date. Announced at Gamescom, there will also be a limited edition “Project Scorpio” model available, which features  a gradient design on the console itself, alongside the console’s Project Scorpio codename printed on the controller and console.

But wait, there’s more. Alongside this news came the unveiling of a new Minecraft-inspired Xbox One S console. Featuring a 1TB hard drive, a custom grass block console, a “Creeper” Xbox Wireless Controller, unique Minecraft system sounds, a vertical stand, and transparent underside with Redstone circuit accents. Bundled with this edition is a full download of Minecraft, plus the Redstone DLC. The Minecraft bundle will release on October 3rd, 2017.

Not content with just one new bundle, Microsoft has also revealed the Xbox One S Shadow of War bundles. With both 500GB and 1TB options available, the bundle comes with a copy of Middle Earth: Shadow of War, an Xbox Wireless Controller, 1-month Xbox Game Pass subscription and 14-day Xbox Live Gold trial. The Shadow of War bundle is available alongside the game’s release on October 10th, 2017. 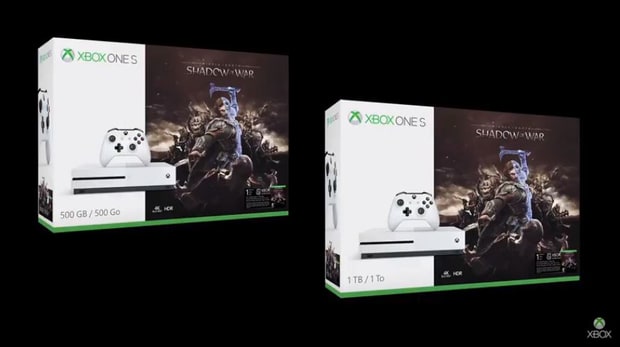 The wait is nearly over. True 4K gaming and the most powerful console available is coming at you in the form of the Xbox One X! Microsoft is firing with all guns blazing at the moment, and with multiple bundles coming from all sides for all types of gamer, could Xbox become the new reigning champion this generation?