A leaked look at an “All Digital” Xbox One

Ever since the initial reveal of the Xbox One, which originally had harsh DRM on physical media, it has been clear that Microsoft envisions a digital future for its home console. There have been rumours that a disc-less version of the console has been in development. These rumours have seemingly been confirmed with some leaked images shared on Twitter. German retailer WinFuture.De accidentally tweeted out some ads for an “All Digital” version of the Xbox One S, which were saved by Twitter user Wario64. 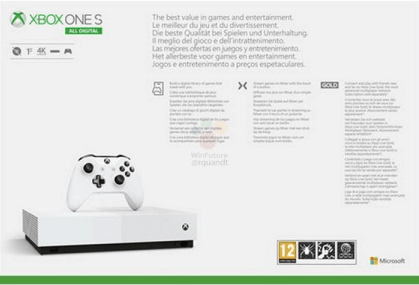 The All Digital Xbox One S appears to be leaning into the established Xbox One brand and design, rather than radically changing up the presentation. With more game purchases being made digitally, a cheaper console dedicated to digital media could find an audience. It will come with a 1TB hard drive, as well as Sea of Thieves, Forza Horizon and Minecraft pre-installed. It wouldn’t be surprising if it came bundled with Xbox Game Pass or Xbox Live Gold as well.

Overall, this is a much better pitch than the original incarnation of the Xbox One. A cheaper console that comes bundled with a diverse variety of games is a good idea for a gamer on a budget. The continuation of the Xbox One S branding and design emphasises that it is just another option among the Xbox One consoles, rather than a big leap in a new direction. The All Digital console will likely turn out better than the ill-fated PSP Go, Sony’s own foray into an all-digital console ten years ago. With hard drive sizes growing and digital purchases becoming more convenient, it is possible that gamers of 2019 are much more willing to embrace an all-digital console.

It will be interesting to see how popular this new version of the console becomes. Sony and Microsoft are gearing up for the next generation of consoles, and whether or not they stick to the status quo, or attempt to invest more in digital distribution, will depend on the success of projects like this All Digital Xbox One. At least betting on digital distribution is probably a better investment than the Kinect turned out to be.

Furthermore, there are newcomers, like Google’s Stadia, which are seeking to mix up the established order with an all-streaming console. Regardless, this will likely not be the last attempt at a disc-less console by the major console manufacturers, so it remains to be seen if consumers are ready for an all-digital future.

Days Gone is the next PlayStation title coming to PC

Diablo 4 – Everything you need to know from BlizzConline 2021