Call of Duty: Modern Warfare getting the reboot treatment

There are two things we can count on with every new year: we will get 1 year older, and Activision will release a new entry into their long-running Call of Duty franchise, with the next installment announced being… Modern Warfare. Again.

Call of Duty: Modern Warfare (2019) is the title of this next installment. Infinity Ward has stated that this title will not be a “remake” of the original Modern Warfare released back in 2007, but will instead be more of a “re-imagining” for the series.

The title is said to be updated to be much more relevant to our current and real-world wars showing a more authentic and realistic view of what being a soldier in today’s world is like and will feature the return of a single-player story-focused campaign, after last year’s COD ditched this in favour of a battle royale mode.

Campaign Director Jacob Minkoff  explained that this new entry’s campaign will aim to “Create an emotional connection through the realities of war,” and will “Push the boundaries of the medium.” This means we can expect the usual hard-hitting and violent gunplay fans have come to love in the series.

One of the biggest changes announced on the multiplayer front is that this title will now include cross-play across PS4, Xbox One, and PC  versions, a first for the series and welcome addition for all as it means we have an increased number of ‘noobs’ to dominate. It’s also a big AAA that is including this feature on launch, which is also a pretty big deal.

Another welcome change to multiplayer is the exclusion of a season pass, which has long been an annoying factor for fans as post-launch maps were not accessible unless you shelled out money for the extra content. Instead, all new maps and events will be available to all players at no extra cost. This does not mean there will be no micro-transactions or content locked behind paywalls of course, however we will have to wait for further details to be released on this. 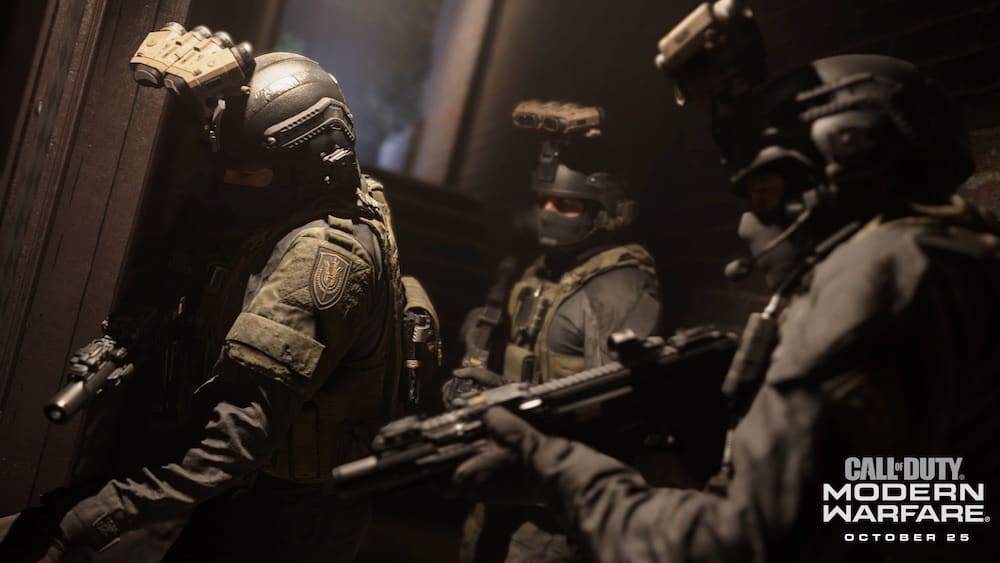 A change that might displease some fans is the removal of the infamous Zombie mode that usually accompanies the Treyarch developed entries into the series.

In an interview with PlayStation Lifestyle, Jacob Minkoff explained “we’re trying to create an authentic, realistic feeling world. We don’t have the flexibility to do something like put zombies in the game. That would compromise the feeling of playing in a world that feels realistic and authentic and relative to today’s conflicts and things we face.”

After WWII had  a strong, visceral and realistic campaign and Black Ops 4 had its focus elsewhere, it is nice to see them returning to form with the game that really started the Call of Duty craze in earnest back when it launched early in the last generation of consoles.

Call of Duty: Modern Warfare is set to release on the 25th of October, 2019. Are you suffering from COD fatigue, or does this newer direction reinvigorate interest to return to the series? Let us know in the comments below.