Shakedown: Hawaii is the over-the-top follow up  to Retro City Rampage,  which was a parody of 80’s and 90’s pop culture in the style of the original Grand Theft Auto games. That spirit is definitely present here in Shakedown, but while it comes from that influence this game is an entirely different beast, bringing the world itself into the modern-age while keeping the retro vibes when it comes to audio and visuals.

In Shakedown: Hawaii, you play as a CEO who is down on his luck and in need of funds fast. By making important changes to your owned businesses, purchasing new ones and “shaking down” local stores so that they pay you a portion of income, you slowly but surely take over the island in order to reap the financial benefits. You play as someone who is genuinely an asshole CEO trying to steal money in any way possible, including through quite literal means. This is refreshing and entertaining, and I was constantly amused by the ridiculous ideas to make money off the unwashed masses.

References to capitalism in the modern world are frequent and often hilarious; early on, you start investing in VR companies, but as the fad quickly wears off you begin to pivot and experiment with AR instead. You’ll see an opportunity to create a protein drink that is intentionally made from nothing good, and change the amount of liquid in your cola companies bottles to cut costs and fool the consumer. Missions are short, sharp and simple, drip-feeding mechanics early and frequently until you can properly build your evil empire. 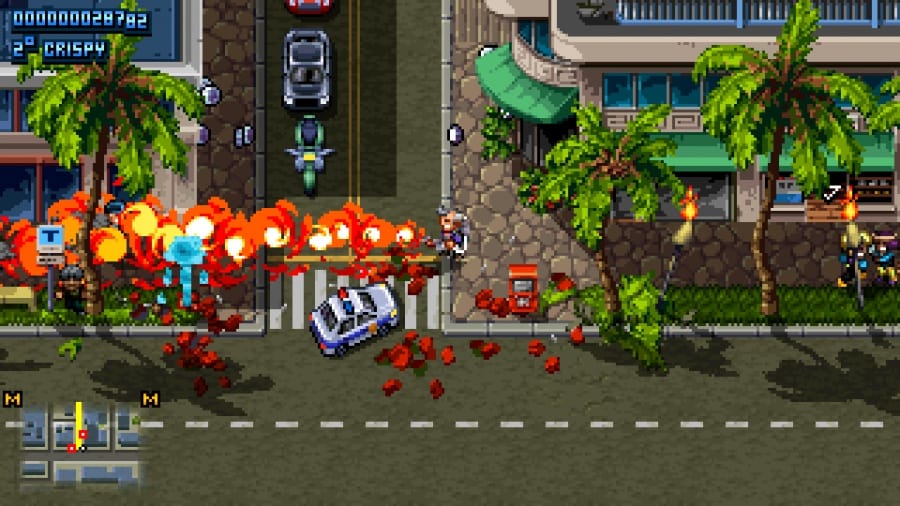 This kind of gameplay with short missions all involving destruction of some kind has the potential to get repetitive, but Shakedown impressed me with how much it changes things up, and how silly it is in practice. For example, shaking down a shop could mean smashing things with a baseball bat, but to shakedown the local Go Kart rink you have to jump in a kart and drive through the course causing chaos. Another store was prepared for a jerk like me and released a trap door that left me in a basement, having to find a way out.

One particular mission also included a woman who, on a show similar to A Current Affair, blamed my soda company for her husband leaving her. I  had to find her and take her to where her husband was having an affair with another woman to show that her claims were false and that it was infidelity destroying her marriage, not my companies beverage. These diversions, along with the missions where you play as your rebellious son or a travelling rogue helping you find ingredients and intel from other countries, which highlights the surprisingly slick shooting mechanics. It always keeps things fresh, funny and moving along at a blistering pace. 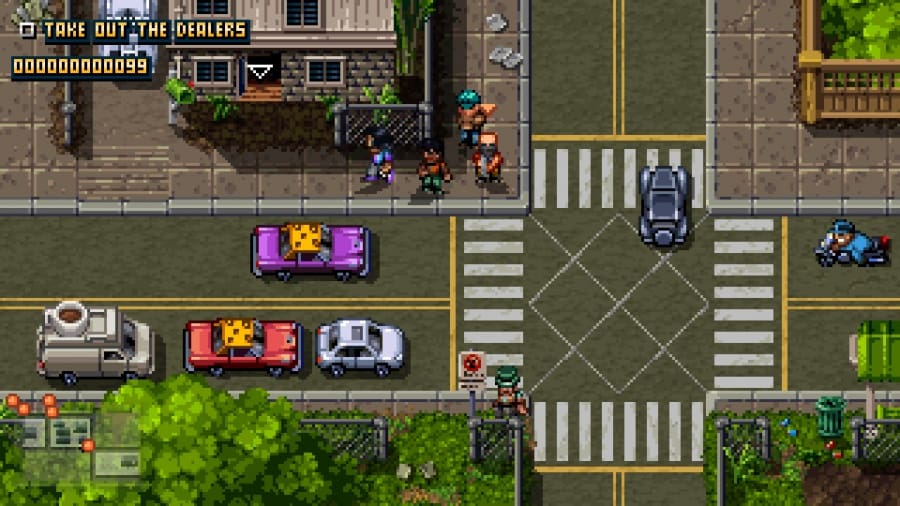 The game uses a 16-bit aesthetic that is incredibly detailed and colourful, very well-suited to the various kinds of chaos you’ll be causing on the streets. There’s plenty of time to run around wreaking havoc and chipping away at activities, earning more and more income, slowly taking over. There are no moments of loading screens and cut-scenes are also easily skippable so it’s very friendly for handheld play on the Switch in particular, with a bunch of short-burst madness you can enjoy.

I didn’t expect to love Shakedown: Hawaii, but I have absolutely fallen for it. It’s zany, over-the-top, full of mindless destruction and operates at such a fast pace that I often saw hours fly by before I realised it. VBlank Entertainment have done an excellent job of pumping variety and humor into this game, making it a tempting diversion from a lot of the more serious titles on the market.