Transgender in Cyberpunk 2077; inclusive or exploitative?

Hi folks, Putting a content warning here, as this article deals with the recent mess involving Cyberpunk 2077. As such there may be some material some readers find distressing, mainly focusing around transphobia. If you think it might be too much, take care of your self, and maybe give this one a miss.

A picture says a thousand words

CD Projekt Red has put their foot in it once again when it comes to trans representation. Cyberpunk 2077, CD Project Red’s newest IP, contains a troubling depiction of transwomen in the form of an in-game advertisement. The advert features a female, in a tight leotard,  with a visible erection. It’s for an in-universe drink called ‘ChroManticore’ and features copy that reads “Mix it up,” a not-so-subtle reference to the trans model.  The entire ad reeks of the hypersexualization and fetishizing of transpeople. And apparently, that’s the point.

Kasia Redesiuk, an art director for Cyberpunk 2077 who’s responsible for the in-game media and megacorporation branding, defended the advert in an interview with Polygon. “Personally, for me, this person is sexy… However, their beautiful body is used for corporate reasons. They are displayed there just as a thing, and that’s the terrible part of it.” Redesiuk says that this is meant to mirror the kind of hypersexual ads we see in today’s current media.

She states it’s designed to feel jarring and overly aggressive,  and viewed in a negative light by the player.“It was a conscious choice on our end to show that in this world — a world where you are a cyberpunk, a person fighting against corporations. That [advertisement] is what you’re fighting against.”

The problem is that women are already hypersexualized, and transwomen are no exception. Transwomen are seen and treated as a fetish by a large population of the community. One need only look at the various porn sites and places like 4chan to see the extent. Their bodies are treated as an object or thing. An item to be used, abused, and then thrown away. So this hypothetical future that Redesiuk talks about is already a reality for many in the trans community. The ad is for a drink is called ‘ChroManticore’, but the whole thing feels like the woman is what’s on sale, not the beverage.

However there’s another aspect to this. The feeling that this ad is being used as a joke. That the transgender model in it is some kind of punchline. This, sadly, is also something many in the trans community are used too. Negative, poorly conceived, and comedic depictions of transpeople in media, transwomen especially, is nothing new. 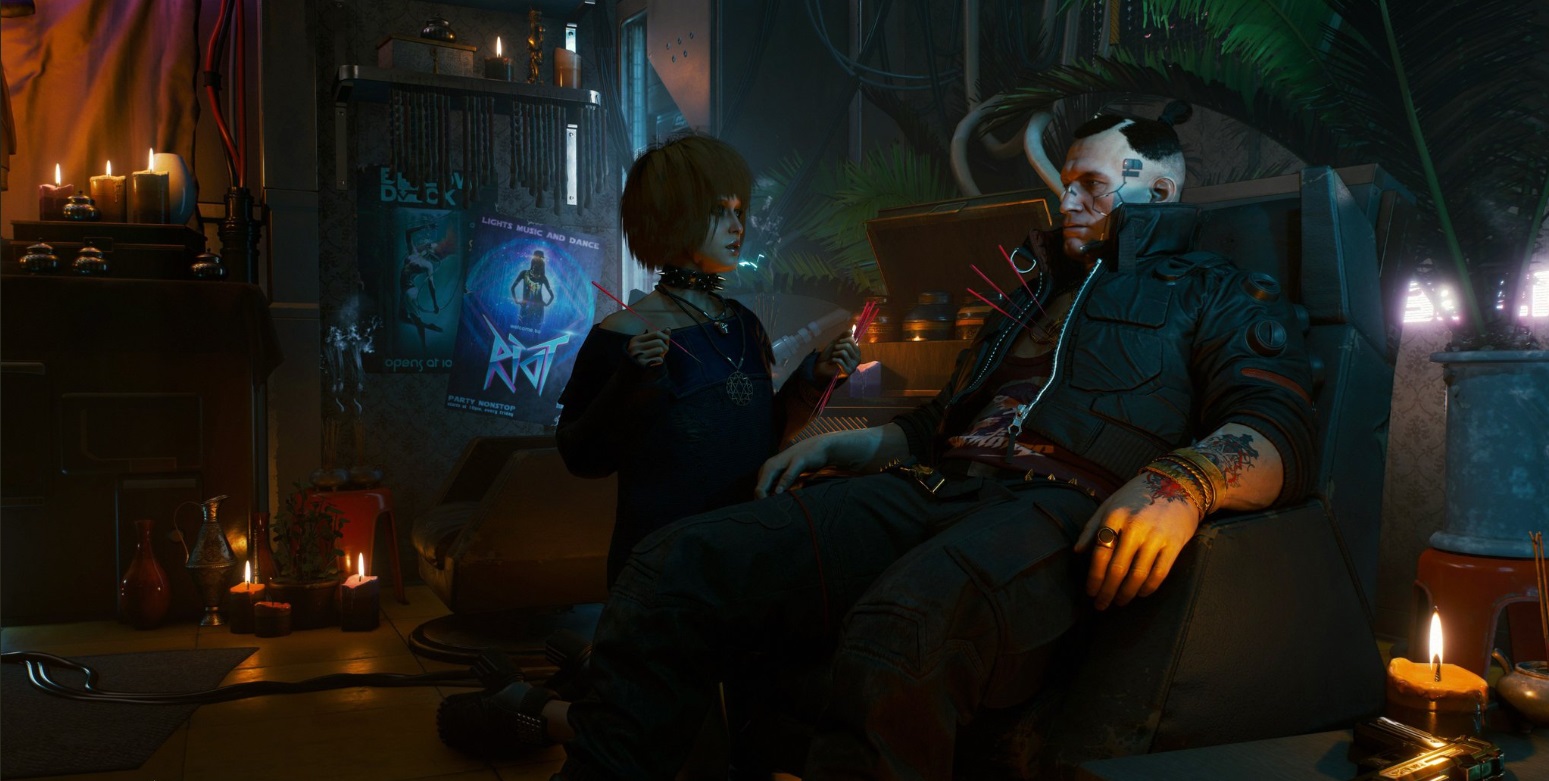 There are numerous examples across fandoms many of us enjoy. From Lord Fanny in Grant Morrison’s The Invisibles to Poison from Street Fighter and Mariandale from Ixion Saga DT—the examples are numerous. And often these depictions are played for laughs, with the jokes boiling down to “LOL its a dude in a dress”. Which, with the cartoonishly large proportions of the model’s phallus, seems to be the ad’s punch line.

Then there’s the trope where trans characters are often depicted as victims or villains. A trope many are fed up with.  And a trope this ad willingly embraces. “I think that sexy bodies are sexy. Full disclosure: I love female bodies. I love male bodies. I love bodies in between. This is who I am” states Redesiuk. “However, I hate it when it’s used commercially. And that’s exactly what we want to show by doing this exactly, by showing how big corporations use people’s bodies against them.” Essentially, putting her statements into context: The Trans model is someone who needs rescuing from the clutches of the big bad megacorp and we, as the cyberpunk fighting against those megacorps, are the one meant to rescue her.

Redesiuk says she never meant to offend anyone. That this wasn’t meant to be a slap in the face of the trans community. She states that she wanted to “show how over-sexualization of people is bad.” That this whole fiasco was part of some effort to garner support and empathy for the LGBTQIA+ community amongst wider gaming audiences. “we need more acceptance in the world… I would really love for the world to change and be a better place for everyone” She stated in the interview. I honestly wish I could take her statements at face value. But given CD Projekt Red’s track record when it comes to trans issues, its really, really hard.

This isn’t the first brush with potential transphobia for  Cyberpunk 2077.  Back in August 2018, the games official Twitter made a transphobic joke in response to a fan’s tweet.  The tweet made reference to the phrase “Did you just assume my gender?”, a phrase that has been used as a dog whistle to paint transpeople as overly combative about having their gender expression and pronouns respected. You’ll hear the phrase most often echoed in the more seedier parts of the internet, but it’s common all around. The Tweet was quickly deleted and an apology issued. But for some fans, it was too little too late.

Of course,  the game’s bad behavior isn’t just relegated to transphobia. There have been some weird racist undertones going on too. As reported by Rock, Paper, Shotgun, this year’s E3 demo of Cyberpunk 2077 had some troubling depictions of racial stereotypes. The player character, known as V,  slaughters two primarily black gangs, The Voodoo Boys and The Animals,  with little remorse. It comes after V has ridiculed one gang’s thick Haitian accents, mockingly spouting “and who is dem” in reference to their pronunciation. It’s troubling stuff.

In the demo you brutally massacre a load of black people in a hail of blood and bullets. It’s actually disgusting. It’s a white supremacist fantasy come to life. It’s completely and utterly horrible.

The image depicted Postal Guy, the game’s protagonist, urinating on a tombstone that read “Games Journalism, Committed Suicide, Aug 28th 2014”. That date is widely accepted as the start of the notorious hate campaign, GamerGate.  GamerGate has, since 2014, spent the majority of its time harassing women, ethnic minorities, and the LGBTQIA+ community. They’ve also been credited with setting a precedent for the harassment of journalists in the wider community.

The most concerning element of all this is that GOG could have chosen any picture to promote Postal 2. There plenty of infamous moments from that game to choose from. But GOG chose to use this specific image, not only giving the campaign the attention it craves, but also a sense of legitimacy, and a platform. 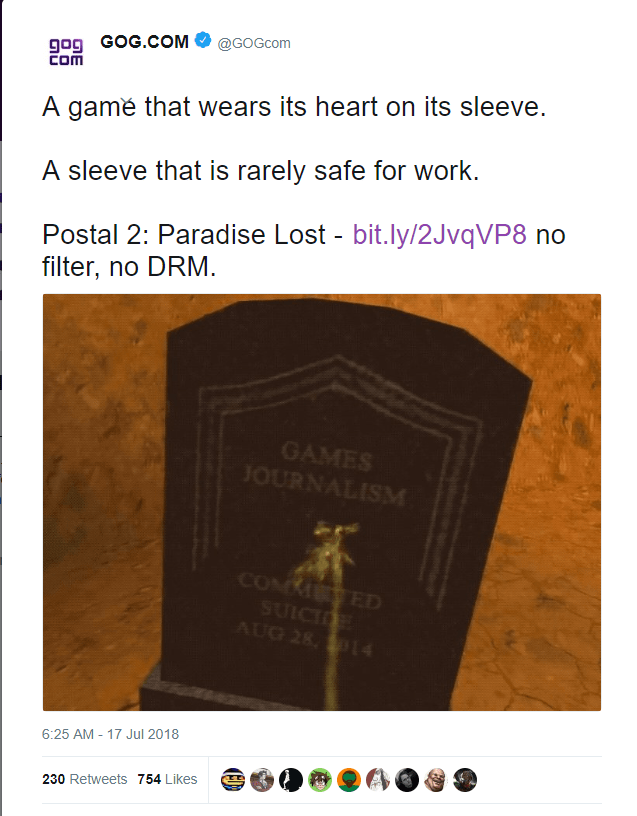 GOG then later made a tweet in October 2018, co-opting the hashtag #WontBeErased to sell videogames.  The #WontBeErased hashtag sprung up in response to a New York Times story reporting that the Trump administration wanted to establish a legal definition of sex. This definition would roll back the rights of transpeople effectively erase them in the legal sense.

The hashtag was advocating for trans rights, recognition, and protection. It was also trending at the time so GOG chose to take advantage of that for marketing. GOG would later pass it off as a pun and would admit it was in poor taste during a lackluster apology. The problem here is that trans issues, especially ones like that, aren’t a joke. They’re not something to be co-opted for the sake of selling a few copies of Baldurs Gate to the five people who haven’t played it yet. 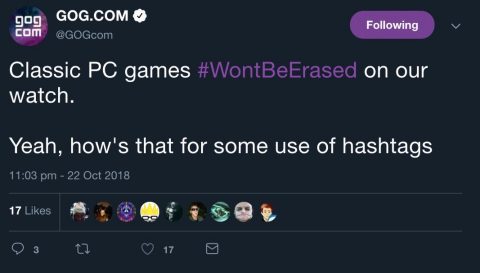 A step in the right direction

Since then, CD Projekt Red has made some positive steps. In a recent interview with Gamasutra, Quest director on Cyberpunk 2077, Mateusz Tomaszkiewicz, has stated that Transgender options will be available in the character creator. “We want to do this thing where, as you create your character, after you choose the body type, you can, for example, use physical traits as you build your face that could be assigned to a man or a woman” states Tomaszkiewicz. “The idea is to mix all of those up, to give them to the players, as they would like to build it. Same goes for the voice. We wanted to separate this out, so the players can choose it freely.”

It’s certainly a good move. Playing as an angry transperson seeking to destroy the system that’s exploiting them sounds like a fun potential narrative. Certainly better than a straight cis man, of which there are plenty protagonists identifying as, playing savior. 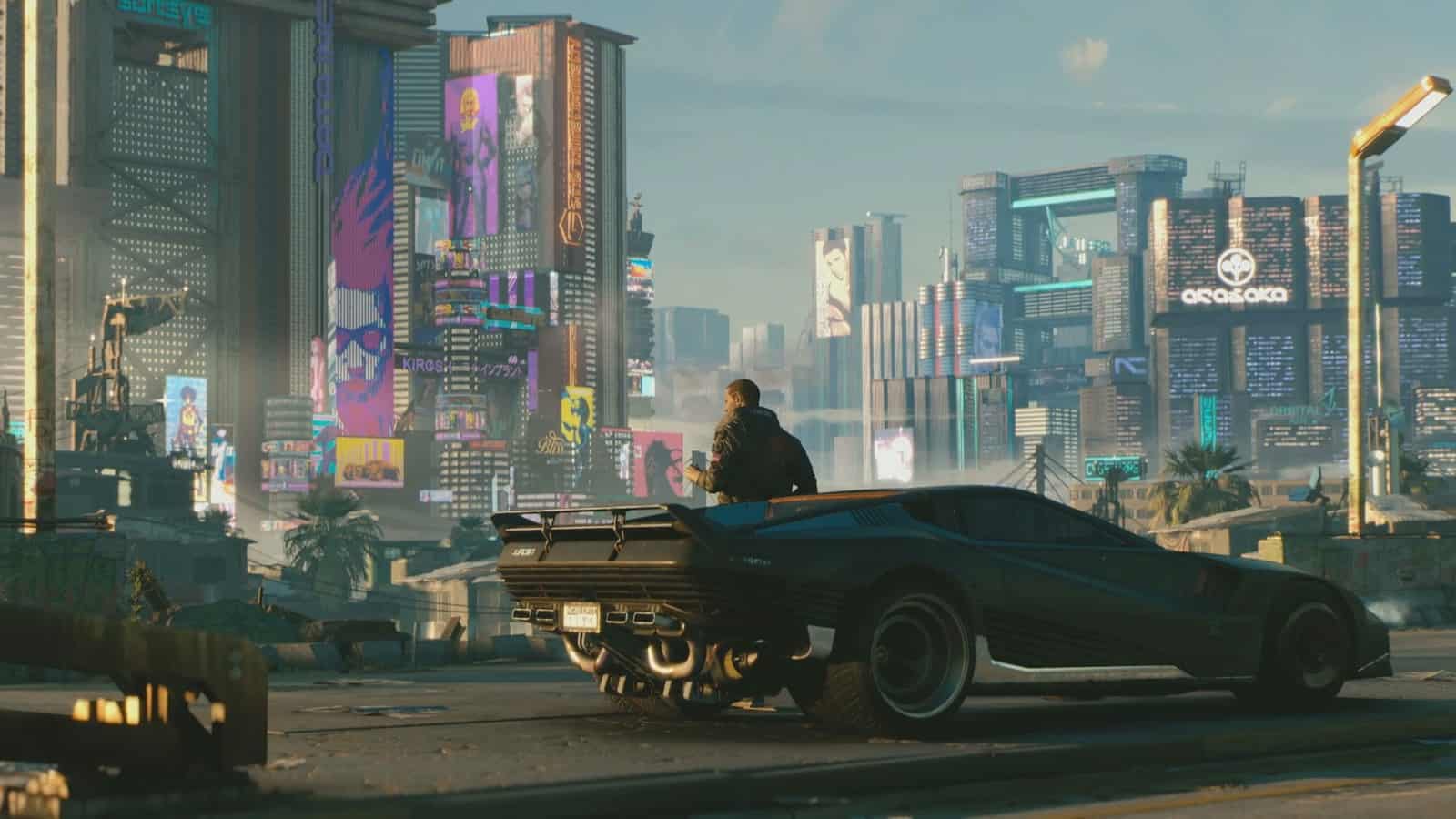 In the end. This is a tough one to wrap my head around. As stated above, I’d love to take Redesiuk’s words at face value. I’d love to believe that this was an honest, if misguided,  attempt at representation from a woman who just wanted to try and make things better in her industry. But just like how it’s hard to separate the artist from their work, it’s hard to separate the employee from their employer.

When you start to take into account everything CD Projekt Red has done in the past year or two, it starts to paint a grim picture. Evidence starts to mount that their twitter slips aren’t really slips. That this wasn’t an attempt at positive representation. That perhaps there’s something rotten in the state of games development.

And while yes, the recent announcement of trans options in character creation is definitely good news, I can’t help but feel its reactionary. That it’s the desperate flailings of a company in damage control. Like they’ve been caught red-handed but are still trying to convince us they’re innocent. 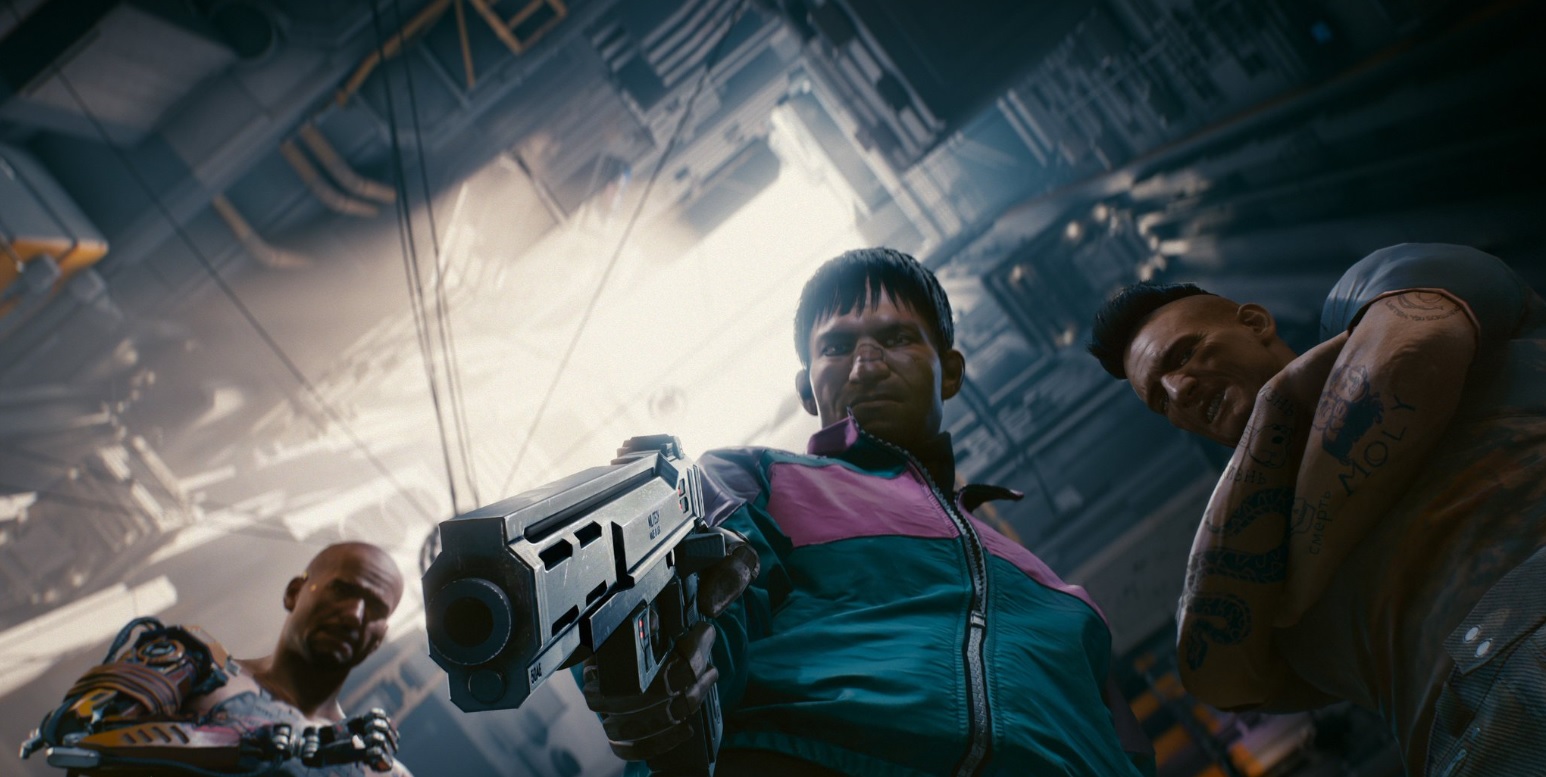 Maybe something good will come of this though. Maybe this will force CD Projekt Red to take a good long hard look at themselves and decide what company they want to be. Maybe they’ll fix their representation. Maybe their character creation system will be everything they say it is, and I’ll be able to play as a trans hacker, or enby badass making their way through the sprawl. But only time will tell whether we actually get any of that. There’s almost a year between now and April 2020, when Cyberpunk 2077 is due to be released.

Buildings Have Feelings Too! Review – Hurt feelings all around