Gears 5 will remove references to smoking

The move to remove references to tobacco use has apparently been in the works for a while. On Twitter, The Coalition studio head Rod Fergusson said “I’ve been against smoking from the beginning and have worked hard to not make it a part of our franchise. Ever notice that the Dizzy concept art for Gears 2 has a cigarette but the actual character in the game doesn’t? I stopped it.”

“I’ve seen firsthand the devastating impact of smoking,”  Fergusson elaborated in a public statement “It’s always been important for me to not use smoking as a narrative device, which is why we made the conscious choice to avoid highlighting or glorifying smoking in Gears 5 and throughout the Gears of War Universe moving forward.”

Seth Ladetsky,   sales strategy and revenue head at ELeague, which  holds the broadcasting rights to Gears 5,  concurs with Fergusson. “This took a lot of time and a lot of good thinking,”  Ladestsky said. “It’s the right image for ELeague—and the game itself—to project.” Ladestsky has further stated that, although violent video games has not been linked to violent behaviour, smoking in media has been linked to audience members becoming smokers.  As such,  avoiding glorifying smoking by featuring it in popular video games may help prevent people from  becoming smokers.  He concluded by stating that removing tobacco use from Gears 5 “doesn’t change the nature of the game itself”.

Whilst none of the characters in the Gears of War franchise are necessarily chain smokers, characters smoking has been an element of the franchise.  Despite the series’ MA rating, Fergusson believes that removing references to smoking is beneficial overall.  In a followup Tweet, he stated that tobacco was removed “simply because I didn’t want to glamorize something that is addictive and kill you. Wasn’t trying to be any moral police, just reflecting my beliefs after losing friends to lung cancer. If you had the ability to create a world, what would you change?” 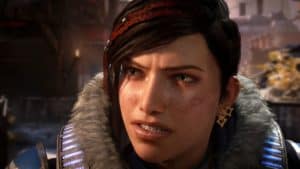 Gaming has had an often complicated relationship with smoking. The Metal Gear series prominently had its protagonists smoke regularly, often with gameplay benefits. Other franchises, such as the Deus Ex series, have prominently featured smoking, even in recent installments.  Despite Australia’s extensive laws prohibiting the promotion of tobacco products,  games have rarely been rated more restrictively due to the presence of smoking in them.

Gears 5 is slated to release on PC on Windows 10 and Xbox One on September 10, 2019, and you can play it four days early if you have Xbox Game Pass Ultimate.